Slovakian club Dunajska Streda knocked back the initial £1.75million offer for the 21-year-old frontman during the week.

Brendan Rodgers is keen to get the hitman, who has scored 18 goals in 23 appearances this season, on board to help share the frontline duties with Odsonne Edouard.

However, the Hoops boss has no intention of getting involved in a bidding war for Bayo and will focus his attention elsewhere if the second move is rejected.

The champions believe they have made a fair offer which would see the majority of the fee paid up front and a sell-on clause would also be included in the package. Bayo is reported to want to join up with Rodgers’ squad, despite interest from Austrian outfit Rapid Vienna.

The lively attacker is one of FOUR players linked with Celtic in the opening days of this month’s transfer window.

Paris Saint-Germain’s teenage winger Timothy Weah could agree a six-month loan deal, Scotland international left-sided raider Oliver Burke, who has struggled to make an impact at West Brom following his big-money switch from RB Leipzig, is also on the radar as is Belgian international right-back Timothy Castagne, but the Atalanta star is also a target for Serie A rivals Lazio. 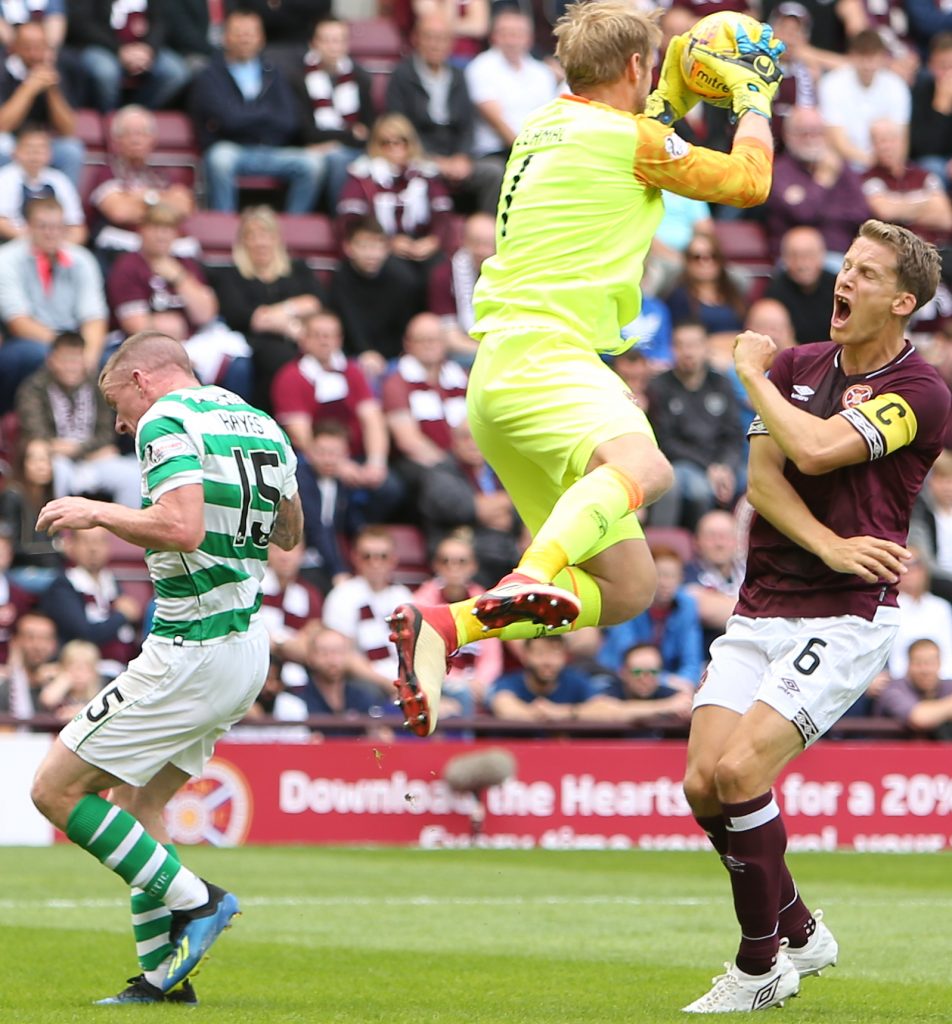 OUT OF LUCK…Jonny Hayes is thwarted by Hearts keeper Bobby Zlamal and defender Christophe Berra at Tynecastle in August. It was a rare first team start for the Irishman. Pic: Geo.

The Hoops will make room for incoming transfers by shifting several of their players in the forthcoming weeks.

Jonny Hayes, who suffered a broken leg at Dundee in Boxing Day 2017 following his £1.2million move from Aberdeen the previous summer, has struggled at his boyhood favourites and has been linked with a return to the Dons in a temporary transfer.

Lewis Morgan, who signed for £300,000 a year ago before being loaned back to St Mirren, is interesting his former Paisley boss Jack Ross at English League One outfit Sunderland.

Centre-half Jack Hendry, who hasn’t figured in the first team since his appearance against RB Salzburg in the 3-1 defeat in October, is also on the Wearsiders’ wanted list while Portsmouth and Bradford City are monitoring his situation.

The Scotland international, who cost £1.3million from Dundee last January, will be allowed to move to get some game-time until the end of the campaign.

Misfit Marvin Compper, who hasn’t even managed to play an entire game since his £1.2million move from RB Leipzig a year ago, will be on his way, too. His contract is likely to be scrapped.

However, one player who is definitely remaining is right-back Anthony Ralston who could be given a run in the top side with Mikael Lustig looking to be poised to leave at the end of his contract in the summer with AIK Stockholm waiting to pick him up as a free agent.

St Mirren have made an enquiry about the availability of the 20-year-old defender who was loaned to Dundee United for the second half of last season.

However, this time Ralston is staying put with Rodgers keen to give him an extended run in the first team.