DIDIER AGATHE believes links to Celtic are crucial in the hunt for a new manager.

The former Bhoy racer, who starred en route to Seville in 2003, acknowledges the qualities of ex-team mate John Kennedy who has been made caretaker boss until the end of the calamitous campaign following last month’s departure of Neil Lennon.

Republic of Ireland legend Roy Keane has expressed an interest in the role and is one of a host of names linked with the Parkhead post.

Agathe insists insider knowledge will be crucial for anyone coming into the job and stressed: “It’s a very difficult situation for the club just now because nobody thought this would happen.

“The team won nine in a row, they were looking good to make it 10 and it hasn’t happened.

“Now Celtic will look at a different approach. It feels like a fresh start.

“But that is not easy and there are many changes coming, so I do think it’s better to appoint someone who knows Celtic.

“I would like to see someone who is passionate about the club, who knows what it means to win for the fans and the team. 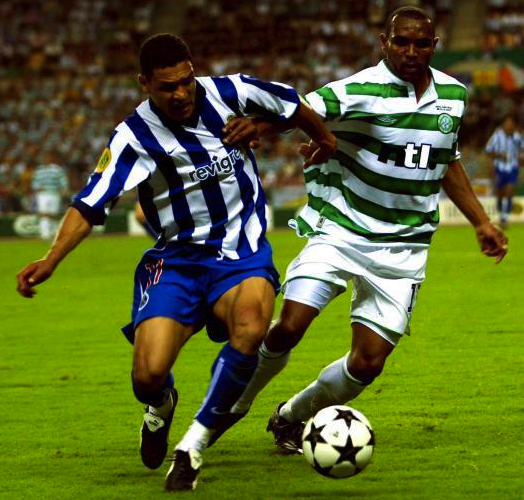 ON THE RUN…Didier Agathe in action against Porto in the UEFA Cup Final in Seville in 2003.

“I also believe the board must give the manager time to get things right, because they will almost be starting from scratch.

“It will be a new manager, new players and a new system. That can take some time, so there will have to be patience.

“This summer, Celtic need to get the right structure in place, they need top scouting and they need investment.

“The board will be looking at all of this right now, but it’s difficult to know what kind of manager they will appoint.”

Agathe, speaking to the Scottish Sun, added: “I felt sad for Neil when he left because it has been a strange season for Celtic.

“He started it with some new players, no fans in the stadium and things didn’t go well.

“That is the same for other clubs, too, but it seems like Celtic weren’t the same team without the supporters at games.

“I was surprised at the results and when I saw some of the games, you could see the players had become a bit fragile.”

Lennon was in charge when Celtic lost the first two Glasgow derbies of the season. The first – a 2-0 loss in October – was one of the most pathetic, powderpuff performances witnessed by a Hoops side in the derby in decades. Ninety minutes passed without Allan McGregor being asked to make a save.

The match at Ibrox on January 2, was a complete somersault and the veteran keeper was the busiest man on the park for an hour before the encounter turned on its head with the red card for Nir Bitton. Callum McGregor knocked a right-wing corner-kick beyond the startled Vasilis Barkas for the only goal of a fraught confrontation.

Amazingly, it was Steven Gerrard’s team’s turn to go through the entire game without getting an effort on target, but McGregor’s deflection was enough for three points on their way to their first title in a decade.

The teams are scheduled to go head-to-head again at Parkhead with a midday start on Sunday and Kennedy and Co will get the opportunity of inflicting the first league defeat of the season on their visitors.