The Hoops were not interested in the offer that consisted of a £12million down payment with the total made up of cash for appearances and success, according to a report in the Scottish Sun on Sunday.

The 23-year-old Norwegian international defender, who has also been linked with Norwich City and Bundesliga giants Bayer Leverkusen, has already revealed he wants to quit the Parkhead club in this transfer window. 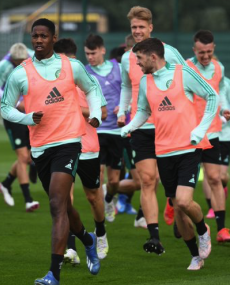 FIT AND RARIN’ TO GO…Kristoffer Ajer in training with his team-mates in Wales.

The club’s hierarchy are prepared to play hardball on their demands for the 23-year-old centre-back who has 12 months remaining on his contract.

They are looking for a guaranteed £15million at least without add-ons for their player and are in no rush to allow him to leave.

Ajer has not featured in Ange Postecoglou’s teams during their friendly wins over Sheffield Wednesday ln midweek or Charlton yesterday, but is being earmarked for action against Bristol City in three days’ time.

The player’s former club, FK Start, are due a percentage of any profits after selling the utility star to the Glasgow outfit for £750,000 in 2015.