Celtic Quick News on News Now
You are at:Home»Football Matters»CELTIC RIP, THE SUNDAY MAIL’S GLEE AS THEY SEND A HEARSE TO PARADISE
By CQN Magazine on 3rd August 2017 Football Matters

PAUL DYKES and KEVIN GRAHAM have made a brilliant start on the CQN Podcast, A Celtic State of Mind.

The next edition will be out tomorrow evening and we are currently juggling with content and guests as news stories and essential updates are considered.

There are some explosive stuff coming your way on this Podcast over the next number of weeks and already the football authorities are having to sit up and take very seriously some of the material that has been put in front of them.

Indeed their reaction to one story will probably mean that it will be delayed from tomorrow’s CQN Podcast, but not for long.

The CQN Podcast is lining up various guests to keep you informed as the Fans for Judicial Review moves forward.

And we will not be forgetting about Resolution 12 and should have Auldheid on to discuss.

BRTH has been invited to talk about all the gel ins and outs and of course there will be some famous Celtic names appearing as well as some legends from the music industry.

Meanwhile have you listened to the current Podcast?

There are two things that will strike you about it. Paul Dykes has put together a brilliant, though chilling edit of Celtic in the first half of the 1990s when The Celts for Change guys had to stand up and be counted.

This in itself is a telling reminder for us all of where we were as a club. Had we gone under there would have been none of this holding company nonsense. Bad? Yes but there’s worse.

Listen to the radio advertisement for the Sunday Mail on the night before they published their edition with the hearse outside Celtic Park.

Their glee is something to behold and to never forget.

If you want to understand the MSM listen to that radio ad today. 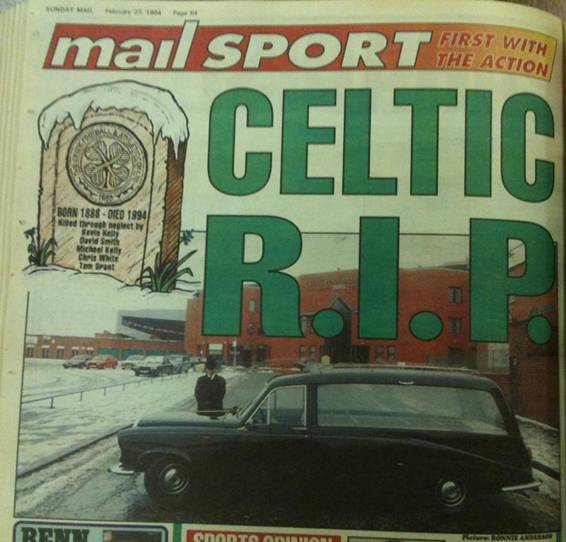 Earlier in the podcast Paul Dykes makes the following remarks which are well worth repeating here:

“The mantra of the Scottish Football Association is that the national game “needs a good, strong Rangers”. It is something that SFA President, Alan McRae, reiterated on this very podcast just a few weeks ago, and he was unwavering in his blinkered and ill-advised belief.

“It is clear that the SPFL share this deep-rooted view.

“Only in Scotland could we have such a lamentable situation where the authorities are so hell-bent on achieving this aim, that its benefactors are continuously treated with utter contempt.

“We as supporters are expected to believe the continuity myth; that no one can be held accountable for the collapse of a 140-year-old establishment; that no one is to blame for an unlawful scheme which deliberately hid contractual paperwork from the HMRC and the Scottish football authorities; that an administrative oversight allowed an ailing club to be granted registration to play in European competition despite being due payables to the HMRC; that no one brought the game into disrepute despite cheating it for over a decade; that a club is a floating entity that lays claim to titles but takes responsibility for nothing else.

“The people who expect us to believe and accept their preposterous hoodwink have never paid into a game of football in the 30 years that I’ve invested in the Scottish game.

“Yet they have let down every stakeholder who has – from players, to supporters, to investors and shareholders.

“The responses from the Scottish football authorities are vague and at times evasive. They show a propensity not to respond directly to questions put to them, but rather to over-elaborate their responses to meet their own agenda.

“They show a tendency to conceptualise matters and hypothesise rather than stick to the facts that we have all witnessed.

“They deny their own culpability while to some extent justify their actions by shifting blame and discrediting others.

“And we are spoon-fed this lie by a compliant media, who have let their very profession down by failing to report accurately on the matter.

“Scottish journalism doesn’t even merit that.

“I doubt we will ever know the full extent of the mischief involving David Murray, but the authorities have failed to take him or anyone else to task for bringing the Scottish game into disrepute.

“This means that he could hitch up at another Scottish club tomorrow, and run them into the grave as well.

“He won’t of course, because he is no longer able to access an £800 million credit facility to make the operation a success.

“All I want – and I know that there are many Scottish football fans who share this view – is transparency, accountability and fairness.

“Celtic are Scottish football’s cash cow, yet those looking after the Scottish game are intent on protecting any toxic carcass playing out of Ibrox. It’s time to find out why”

Indeed, it is time to find out why.

And while talking about animals, or cash cows at least, there is another expression.

There’s more than one way to skin a cat…as we may well discover.

Please listen to the current CQN Podcast using the link below and lookout for the new one scheduled for tomorrow evening.