The Japanese international midfielder, who was crocked in only his second appearance for the Hoops, has suffered another setback, according to a report in the Scottish Sun.

Ideguchi was not one of the 21 players utilised by Ange Postecoglou in the 2-2 draw against Norwich City at Parkhead on Saturday and it is now likely the 25-year-old anchorman faces another spell on the sidelines. 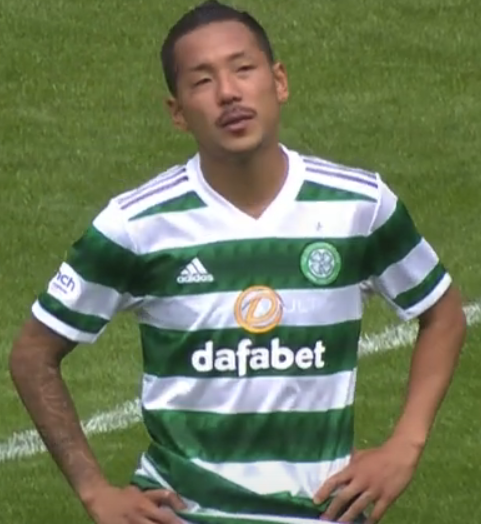 THE END…Yosuke Ideguchi cuts a forlorn figure at the final whistle in the 2-2 draw against Blackburn Rovers earlier this month.

The player arrived with J-League colleagues Reo Hatate and Daizen Maeda and made his first appearance as a substitute in the 2-0 league win over Hibs in Glasgow on January 17.

However, a brutal challenge from Alloa’s Muhammed Diang in the 68th minute and he had to be helped off. Remarkably, referee Don Robertson merely flashed a yellow card for a clear over-the-top assault which was later upgraded to a sending-off and a two-game ban by the SFA review panel.

Ideguchi battled back to take part in a few games before the conclusion to the campaign, but the jinx has struck again with a fresh blow sustained in training.

It is too early yet to gauge the extent of the injury, but the midfield enforcer could face a lengthy spell out of the game.

Ideguchi’s last appearance came as a 62nd substitute for David Turnbull in the 6-0 win over Motherwell as the curtain came down on a memorable crusade at a rocking stadium on May 14.

He will be in the stand when Ange Postecoglou’s men commence the defence of their Premiership title against Aberdeen at Parkhead on Sunday.