CELTIC are stepping up their bid for £4million-rated Carl Starfelt after opening talks with the Rubin Kazan centre-back.

Ange Postecoglou has targeted the Swedish defender as a potential replacement for Kristoffer Ajer who is poised to quit the Hoops with newly-promoted Norwich City linked with a £12million move for the Norwegian.

Starfelt has emerged as a priority target for the new Parkhead gaffer and negotiations are said to be well under way, according to a report in the Daily Record.

The 26-year-old three times-capped stopper is under contract at the Russian club until June 30 2024, but they will listen to offers for the player who came through the ranks at IF Brommapojkarna before moving on to IFK Gothenburg in 2018. A year later joined Rubin Kazan in a £900,000 deal.

Stockholm-born Starfelt made 29 appearances last season and scored three goals with his team finishing fourth in the country’s Premier League. 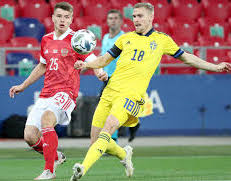 The last time Celtic dealt in the transfer market with a Russian club was in January 2017 when Brendan Rodgers paid £3million to Krasnador for midfield enforcer Eboue Kouassi who was tipped to take over Scott Brown’s role in the line-up. He made a mere 22 appearances before joining Belgian outfit Genk a year ago for around £1million.

The Hoops boss has also been linked with a move for out-of-contract West Brom forward Kyle Edwards, as CQN reported yesterday.

The 23-year-old winger was on Neil Lennon’s radar in January in a posible loan move, but could now move to Parkhead for nothing after leaving the Midlands club at the expiry of his contract.

The former England Under-20 cap has scored four times in 49 appearances across six years for the Hwathorns club after emerging through their youth system.