The Hoops gaffer had set out his team perfectly for the crucial Europa League last-32 encounter after last week’s disappointing 2-0 loss at Parkhead.

The visitors dominated with eight attempts at goal and two on target, as many as they had in Glasgow in the first game.

But the game turned on its head when German referee Deniz Aytekin produced a preposterous second yellow card for right-back Toljan, who had been booked earlier for a tug at an opponent’s jersey.

Valencia skipper Daniel Parejo had an identical foul on Scott Brown in the second-half with the ref about six yards away from the incident, but on this occasion he escaped censure leaving the Parkhead captain looking a little mystified. 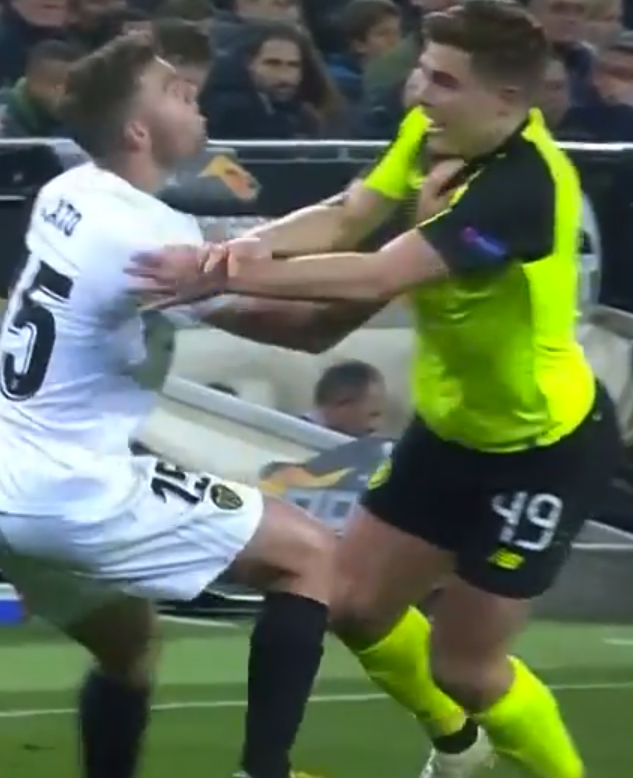 OUCH…James Forrest is stopped in his tracks by an unorthodox challenge from Valencia’s Lato.

Rodgers admitted he thought his side should have been given a free-kick for the initial contact from the home player at the second caution for Toljan.

However, the whistler was quick to banish the on-loan Borussia Dortmund defender and that became the defining moment in the confrontation in which the Scots had been in control and looking comfortable – until that flashpoint moment.

Sportingly, 53-year-old Spanish coach Marcelino conceded: “We are satisfied with having passed the tie as expected, although the first 35 minutes I liked rather little.

“It is logical because when you have such a favourable result of the first game, 0-2, in the second you always tend to relax.

“To that possible relaxation, in that time Celtic was superior and, after the expulsion, we were clear dominating and deserving of the triumph.”