Celtic Quick News on News Now
You are at:Home»Latest News»CELTIC SUPPORT VOTE: GRIFFITHS TO START
By CQN Magazine on 17th August 2015 Latest News
LEIGH GRIFFITHS has warned Celtic cannot afford to switch off defensively when they face Malmo in the Champions League play-off first leg at Celtic Park on Wednesday night.
There is at least £15million and also the acclaim at stake with the group stages of Europe’s most prestigious club tournament only three hours away.
Griffiths was concerned that the Hoops shed two goals for the second successive game in the 4-2 win over Inverness Caley Thistle following the careless 2-2 draw against Kilmarnock at Rugby Park in midweek. 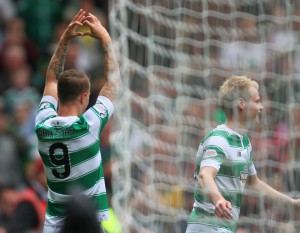 The goals conceded against the Highlanders mattered little to the outcome of the match with the SPFL champions already 4-0 up at that point. However, the striker, who scored his team’s second goal early in the first-half, admitted such sloppiness will prove costly in the European arena.
Ronny Deila has emphasised the need to try to keep a clean sheet at Celtic Park ahead of the return match in Sweden a week tomorrow and Griffiths acknowledged they would need to stay switched on for the entire 90 minutes if they were to meet the manager’s demands.
The in-form striker said: “We played really well, but we gave away a couple of sloppy goals at the end that by our standards were very poor. It’s a warning. If we play like we that in the Champions League we will be severely punished.
“It is something we will look at in training during the week and make sure we sort it for Wednesday. At 4-0 up we were looking at going on and winning five or six. But credit to Inverness. They came back at us in the last half an hour.”Griffiths has started the season strongly in the absence of the suspended Nadir Ciftci. His 12th-minute header was his fourth goal of the campaign, but he knows, with the Turkish hitman available for European matches, it still might not be enough to keep his place in the team against the Swedes.
He added: “You never know if I will get the nod. I have done my chances no harm with scoring the goal. It’s all about what the manager thinks on Wednesday afternoon when he names the team. 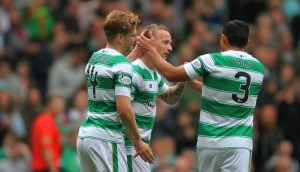 “If I am not in it, I will give my full support to Nadir. He will no doubt do a job for the team and I will be ready if I am needed to come on. It’s disappointing when you score a goal and the big games come around and you are on the bench. I just have to bide my time.”Griffiths also welcomed the news that Celtic had recruited Scott Allan, just days after recommending the player stayed at Hibs for another season.
He said: “I was taking it from a Hibs perspective and them getting out of that league. But, of course, it is great to have him on board and we’ll welcome him to training on Monday. I know him really well from the Under-21 games.
“Scott’s a good player who likes to make things happen. I am sure he will be a good addition to the club.”
CQN recently ran a poll, asking supporters who they would like to see starting in the lead striking role in the matches against Malmo Here are the results:
Which striker would you prefer to lead the line in the matches against Malmo?