The 19-yar-old central defender, who has been linked with a £3.5million move to the Hoops, as CQN reported last month, was banished after hauling back Angel Di Maria in stoppage time.

The referee originally booked Hincapie before checking the TV monitor and coming back to flash red. To make matters even worse, Messi stepped up to take the resultant free-kick and fire in the third goal to complete the visitors’ misery. 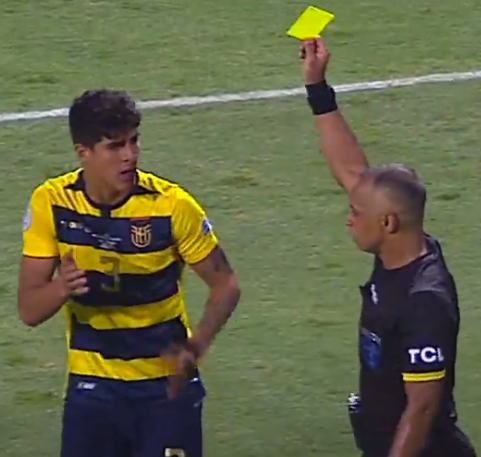 HEADING FOR TROUBLE…Piero Hincapie is shown the yellow card by the referee after a foul in the Copa America loss to Argentina. It got worse for the defender moments later when the match official reviewed the incident on a TV monitor and flashed red.

Messi set up Rodrigo De Paul five minutes before half-time and then did the same for Lautaro Martinez five minutes from the end to ensure a semi-final meeting against Colombia on Tuesday, 24 hours after Brazil face Peru in the other tie. His stunning deadball strike was his 76th goal for his country, taking him to within one of Pele’s South American record.

The little superstar, speaking to the local media, said: “I’ve always said that individual prizes are secondary, we’re here for something else. We have an objective and we’re focused on that.

“It was a hard match, we know how difficult an opponent they can be. The important thing is we’ve taken another step forward.”