CELTIC target Thomas Robert is being urged to forget about a move to the champions and remain at Airdrie.

The Hoops have scouted the French winger, son of former Newcastle United ace Laurent, and Tosh McKinlay was at the Division One club’s game against Montrose at the weekend, as CQN reported.

Neil Lennon is urgently seeking wide Bhoys with James Forrest ruled out with an ankle injury until at least the end of next month while Mikey Johnston made his first appearance of the season during a cameo role in the 2-0 win over Kilmarnock on Sunday.

The Hoops have been monitoring Queens Park Rangers’ touchline flyer Bright Osayi-Samuel, who is out of contract next summer, since June and Robert is now on their radar with head of recruitment Nick Hammond also looking at the 20-year-old raider who joined the third-tier club from Montpelier in the summer.

He has attracted attention from other clubs, but Celtic appear to be at the head of the queue.

However, Diamonds boss Ian Murray is determined to hold onto his hottest property and hopes he will remain and continue his development at the New Broomfield outfit. 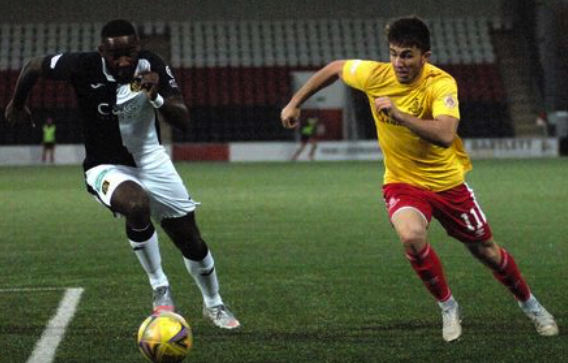 The Airdrie gaffer, speaking to Lanarkshire Live Sport, said: “If someone is desperate for him and puts in an offer, then what can we do?

“We are football club developing young players and it’s great for us, but there’s nothing we can do.

“On the flip side, he can still be here if someone wants to buy him and loan him back.

“He needs to be in an environment in which he is really happy and safe because he’s had a big move over from France, away from his family.

“He is a young man coming to Scotland – and amid Covid, which hasn’t helped anyone – so it has been tough.

“Does he need more upheaval of going somewhere else at this time? At this time, I would say absolutely not.

“But I’m speaking as the manager of Airdrie, who wants the best players on my team.