CELTIC’S highly-rated teenager Bosun Lawal has been called up by the Republic Under-19 squad for their upcoming international triple-header.

The powerhouse defender agreed a three-year contract when he arrived from Watford in the summer, as CQN reported.

However, Lawal’s steady progress has been hampered by an injury that kept him out for three months. Now, though, the skilful back-four operator, who has already played for the Irish Under-21s, is hoping to cap his recent comeback in the European Under-19 Championship ties against England, Portugal and Armenia.

Coincidentally, Lawal’s Hoops team-mate and off-the-pitch friend Toby Oluwayemi, the keeper who arrived from Spurs, has been chosen for the English pool and could be in direct opposition when the nations meet tomorrow. 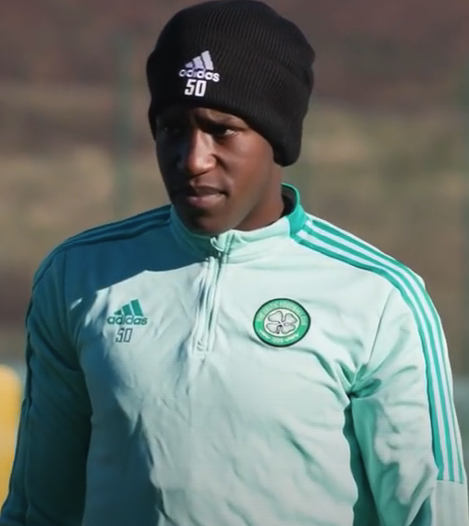 IF THE CAP FITS…Bosun Lawal in training with the Celtic first-team squad at Lennoxtown recently.

The 18-year-old prospect, who rates Virgil van Dijk as an influence in the way he plays, told the Celtic website earlier this season: “The hope is to make my debut with the first team, get my chance and really grab the moment and show people I’m capable of playing at a high level.

“I’ve trained with the first team a couple of times and it’s a really good level. The main point is the intensity, everyone is always at it, there’s no slacking.

“Ideally, I would like to achieve my goals this season. I just have to be ready and wait for the call.”

Lawal, a product of St Kevin’s Boys Club in Dublin, was named Player of the Year at the Watford academy before agreeing the switch to the Hoops.