We were reminded earlier this week by the two authors of the following article which first appeared in CQN Magazine back in November 2011. With Celtic getting approval and so becoming the first club in the UK to be able to introduce a safe standing area we thought we’d look again what Mark Diffley & TV Green had to say in in CQN Magazine back in 2011…

Like many supporters during the Martin O’Neill era, Mark Diffley and TV Green developed a taste for following Celtic in Europe. But after disaster in Artmedia left them facing a season without European adventure, they headed to Hamburg for what would prove to be a perspective-changing football weekend. Their travels have since taken them across Germany, with each occasion suggesting that a more fan-oriented approach – centred around safestanding – might dramatically improve the matchday experience back home.

The purpose of this article is to positively highlight what Celtic might learn from the German fan experience. We felt that the best way to do this would be to tell the story of our typical matchday in Bremen, Hamburg, Hannover, Stuttgart and other cities that we’ve had the good fortune to visit.

To begin, one of the surprising aspects of the German matchday experience is that for a nation of beer-lovers, they seem to leave the pub awfully early to head to the match. This is partly due to what’s taking place around the ground – merchandise, foodstalls, dedicated meeting places with picnic tables and so on – all of which, we speculate, could easily be replicated at the back of the Jock Stein Stand. Nevertheless, there’s a noticeable absence of the last-minute-rush that typifies our experience at home, and we make our way through the security cordon clutching our prized tickets (once again, the match is a sell out).

We enter the stadium at the rear of the Sudkurve and quickly see the benefits of foregoing a final pre-match pint: we get to choose our viewing spot. Further inspection of our tickets indcates that although we have a designated section, we can locate ourselves wherever there’s space. The area directly behind the goal is already packed with Ultras so we wander towards the corner flag and are ushered into an empty section by stewards performing the role of old-school cinema ushers.
Having acknowledged our neighbouring supporters – it always was easier to make people’s acquaintance standing in the Jungle than sitting in the North Stand – the first thing that strikes us is how much space we have compared to in most SPL grounds. Rows are separated by crash barriers, with a built in half-seat approximately marking out each supporter’s space. Although we’re no experts on match safety, it does feel secure standing here, reflected in the number of younger supporters in the crowd who stand on their seat to get an adult’s view of the pitch.

The freedom to choose our vantage point offers a genuine incentive to enter the ground early and as a result the stadium is full before kick off. And as the opposing fan sections make battle through noise, the atmosphere builds until  the players take to the field of play, accompanied by a heavy metal soundtrack. One of our group bemoans the fact that a young Glen Daly picked up an accordion rather than an electric guitar.

As we enjoy the spectacle of colour, noise and faded denim waistcoats, we wonder how the atmosphere at Celtic Park would be revolutionised if the entire Lisbon Lions Lower was given over to this type of fan space? For this group of Tims at least, the news that Celtic are tentatively exploring the possibility of a safestanding section at Celtic Park is more exciting than any rumour of new signings.
Once the game gets underway the quality of the match is reasonable. The  match experience however – with persistent noise, jokes at the expense of other supporters, and the constant unveiling of new banners – is exceptional. As a wise man once said, if you take a decent game and add a good atmosphere, it becomes a great game. 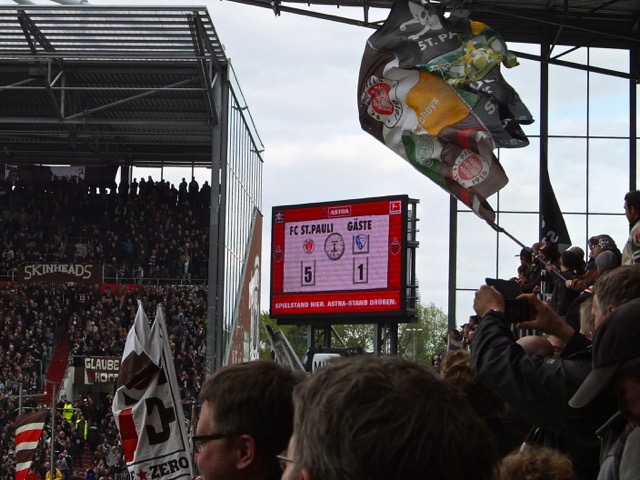 The game follows its normal pattern: decent football, some bizarre refereeing decisions, communal rattling of keys when a corner is taken and a beer soaking when a goal goes in. It transpires that the beer on sale in the ground is of the low alcohol variety which accounts for why so few people seem to buy the stuff, and why those who do, seem happy to liberally spray it around.
The end of the match catches us by surprise as, unlike at home, most people stay for the final whistle and beyond. A collective hush from the crowd signals the beginning of the post-match interviews, conducted on the pitch and relayed over the giant screens for the vast majority of the crowd who are still rooted to the same spot they occupied a couple of hours earlier. This on-pitch analysis, played out to the gallery, feels like The Club acknowledging The Support. It’s all a far cry we muse, from interviews conducted in the bowels of the stadium and broadcast for the benefit of those listening at home.
As the ground begins to empty we reflect on what Celtic might learn from looking to our friends in Germany. Central to our experience is that we’ve been able to stand at the game, which has acted as a catalyst for the ground being full at kick off, an impressive atmosphere from start to finish and the chance to forge new friendships with those around us. Speaking of which, we’ve arranged to meet our new terrace pals for a post-match beer – however after all this standing, let’s hope they choose a bar with plenty of seats.