NEIL LENNON insists he does not want to sell any of Celtic’s top stars.

However, the Hoops boss is powerless to stop the speculation that begins to reach fever pitch as transfer deadlines loom throughout Europe.

The £25million will-he-or-won’t-he Kieran Tierney saga has rumbled on since the initial and measly £15million offer from Arsenal on June 22.

The Gunners, though, realise they have until Thursday at 5pm to get the business concluded and allow the eight-in-a-row champions and their 22-year-old Scotland international left-back get back to normal with speculation, rumour and innuendo zipping around from London to Glasgow.

Lennon, still scouring the market to bring players INTO Parkhead for a crucial campaign, has also had to contend with other players being linked to envious onlookers such as Kristoffer Ajer with AC Milan and Jozo Simunovic with Lille, £72million richer after selling winger Nicolas Pepe to Unai Emery’s side during the week.

Reports from Italy suggest the Serie A giants are pondering a £15million submission for the giant Norwegian while the French outfit rate the Croatian central defender in the £5million bracket.

Here is the Hoops manager’s verdict on the most recent transfer talk circulating around the club as he prepares them for this afternoon’s Premiership kick-off against St Johnstone.

Lennon, in an interview with the Daily Record, lifted the lid to give the fans an update. 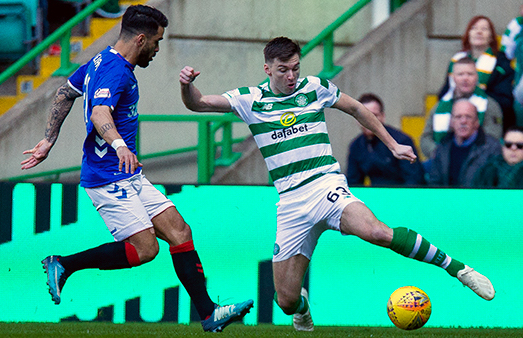 ON THE RUN…Kieran Tierney takes on Daniel Candeias in last season’s 2-1 win at Parkhead.

“Nothing has changed yet. It’s not speaking from insider knowledge, but in my experience another bid will come in. I’d be surprised if it didn’t.

“I’d be delighted if I didn’t, but the good things is we will know either way by the end of the week.

“It’s not our problem but the next few days might be spent sitting by the phone.

“I’ve been in his position, so I have a lot of sympathy for him, when maybe a lot of people wouldn’t.

“But I know what’s it’s like to have to keep adjusting your mindset if things do go as expected.

“This is where this generation are at a disadvantage because it comes at them from all angles, with social media and people surmising or giving opinions, making up rumours.

“It’s not just the media, it’s every angle. He’s got a good stable homelife to keep him in check.

“I make sure of how he’s doing and we’re supportive of him whatever happens.” 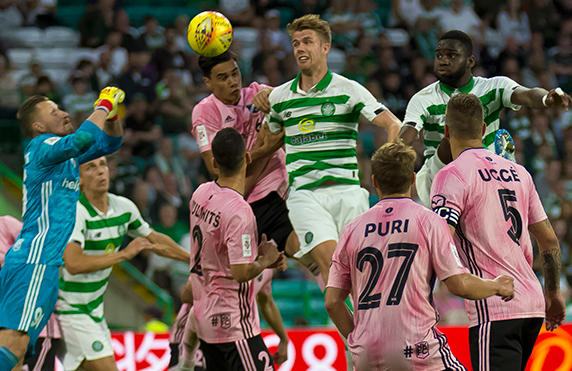 “He has more to come and I don’t think £15million would cut it, not that we are entertaining any offers.

“We would like to extend his contract eventually.  We’d gauge that as we go along, but there’s been NO contact from Milan.

“Kris is a fantastic player and has pretty much played every minute for me.

“We rested him in Estonia, but that’s the first football he has missed since February.

“He has been outstanding and we have high hopes for him. Kris wants to improve, he is a regular international now and you have to remember how young he is at times.

“There will be a mistake from time to time, but his consistency has been excellent.

“Kris has all the strings to his bow – he is a real specimen at 21. He came as a No 10 to Celtic and the spell at Killie did him a lot of good.

“Physically, he is very good and there is a real maturity about him.” 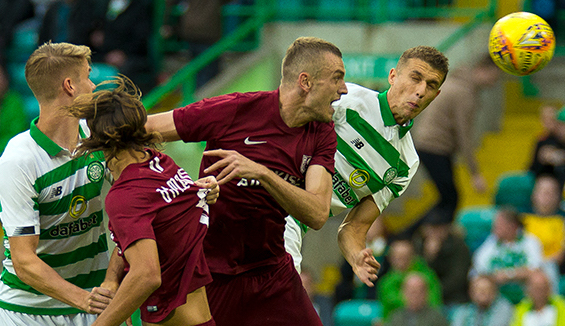 AIR RAID…Jozo Simunovic gets in a header against FK Sarajevo with Kristoffer Ajer watching.

“I’m a big Jozo fan. There’s been speculation about him, but we are not entertaining any offers.

“He’s been superb for me. Ideally I’d like him to be in the building at the end of August.”

Lille coach Christophe Galtier has already admitted he rates the defender who cost £4.5million from Dinamo Zagreb in August 2015 and still has two years to run on his contract.

Lennon, after watching central defensive duo Dedryck Boyata and Filip Benkovic leave the club at the end of the season, has spent £7million on towering Frenchman Christopher Jullien from Toulouse to strengthen his backline.

He paired up the duo in the 2-0 win in the Champions League qualifier against Nomme Kalju during the week, but, unfortunately, both will be missing through suspension when the Perth Saints visit the east end of Glasgow today.

But Lille are likely to be out of luck in their pursuit of the 24-year-old before the August 8 transfer deadline.