Celtic Quick News on News Now
You are at:Home»In Pictures»CELTIC v DONS: THE HAMPDEN STORY: 2017
By CQN Magazine on 14th April 2019 In Pictures

TOM ROGIC lived up to his Wizard of Oz moniker when he conjured up the winning goal two minutes into stoppage time to present Celtic with the domestic clean sweep in Brendan Rodgers’ debut season as Hoops manager.

In an afternoon of contrasting fortunes and changing weather conditions, the elegant playmaker struck the decisive goal as he sauntered towards the opposition’s danger zone in his usual ambling fashion.

The Pittodrie rearguard made the mistake of standing off Rogic and he swept away from Andy Considine before squeezing a delicate effort between Joe Lewis and his near post.

Hampden erupted in joyous mayhem as the Hoops fans danced in the downpour and their heroes celebrated a memorable victory over a stubborn Pittodrie outfit.

Jonny Hayes, who would later become a Hoops player, stunned the Parkhead men with a rocket drive following a right-wing corner-kick that zipped beyond a wall of Celtic defenders and keeper Craig Gordon.

However, Stuart Armstrong provided the perfect quickfire response with a low angled drive that hurtled past the diving Lewis.

Extra-time looked on the cards until the man from Down Under came out on top.

CQN‘s top snappers were at the national stadium to capture the action. Here is the pick of the pics. 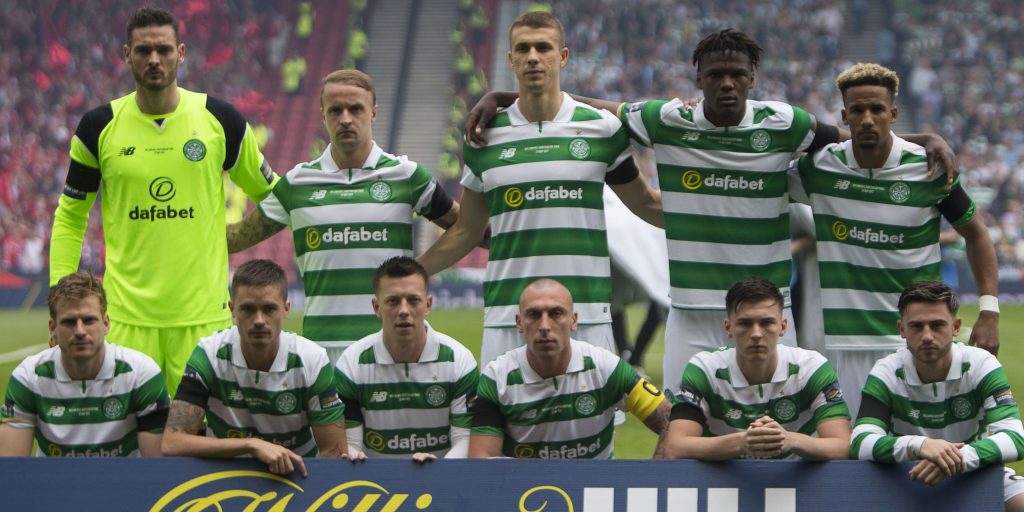 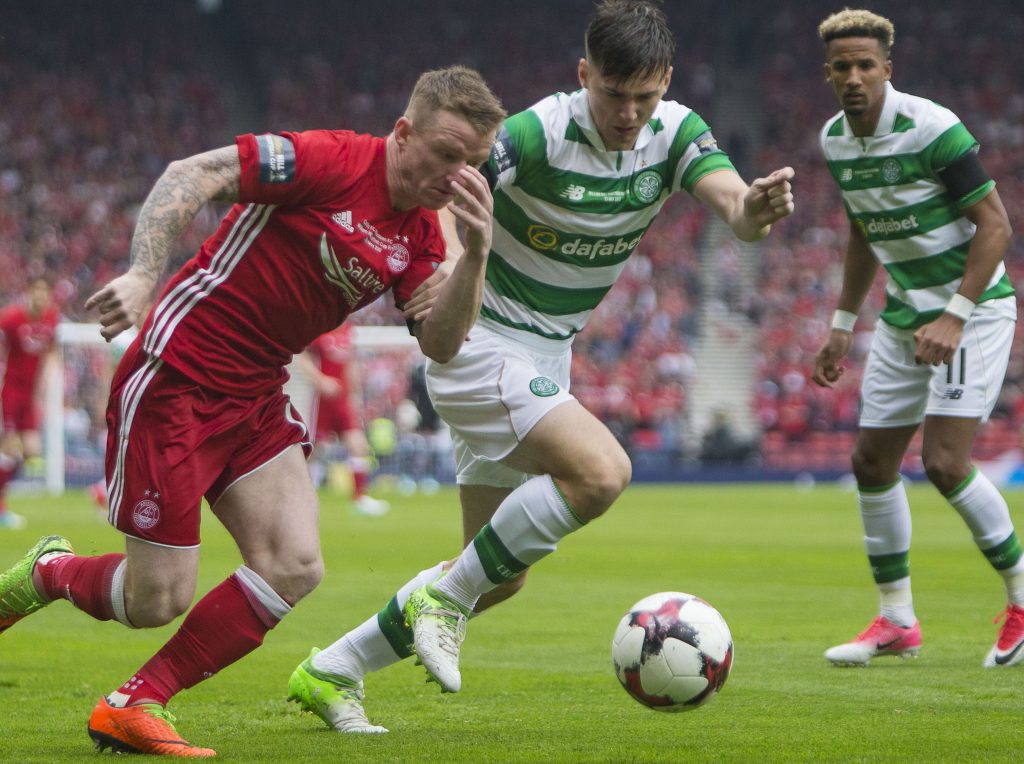 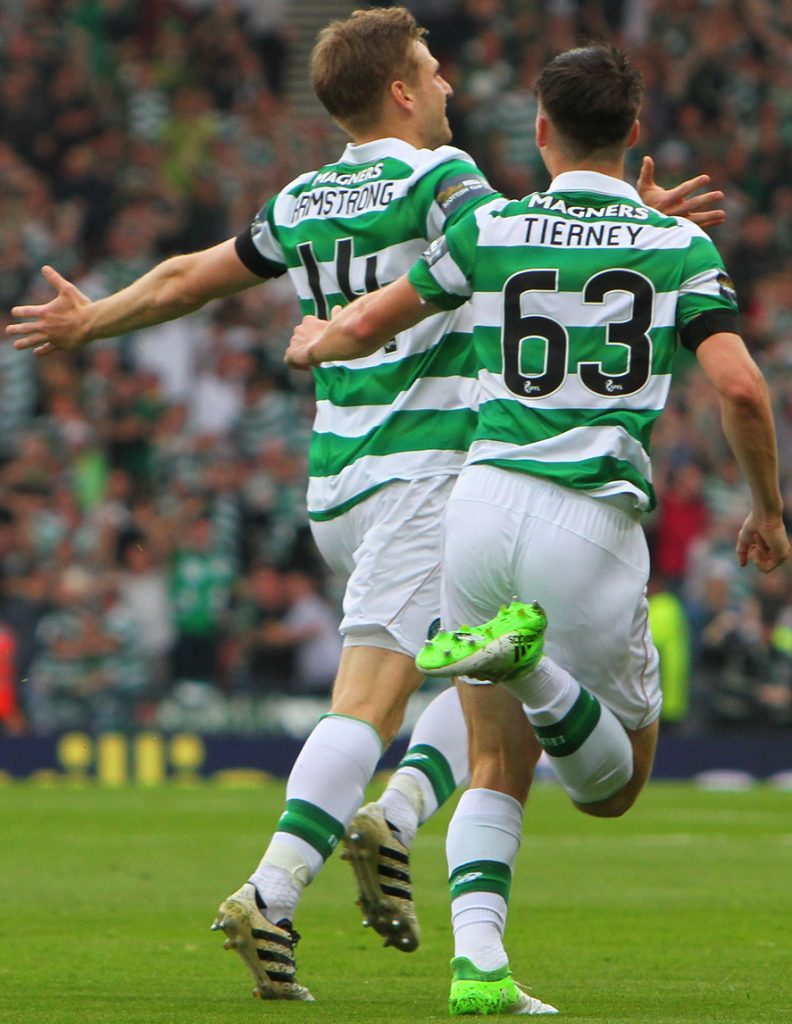 THE EQUALISER…Stuart Armstrong is about to be congratulated by Kieran Tierney after wiping out Jonny Hayes’ effort for the Dons. 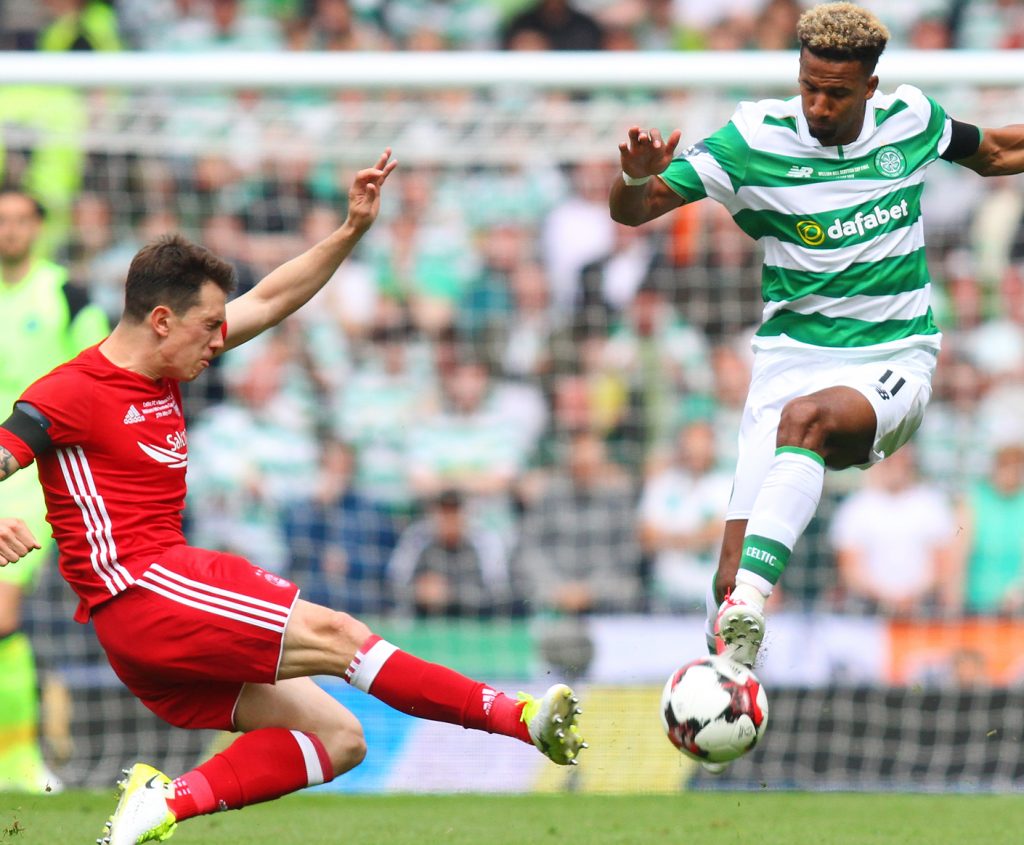 CRUNCH…Scott Sinclair prepares to swerve past a tackle from Ryan Jack. 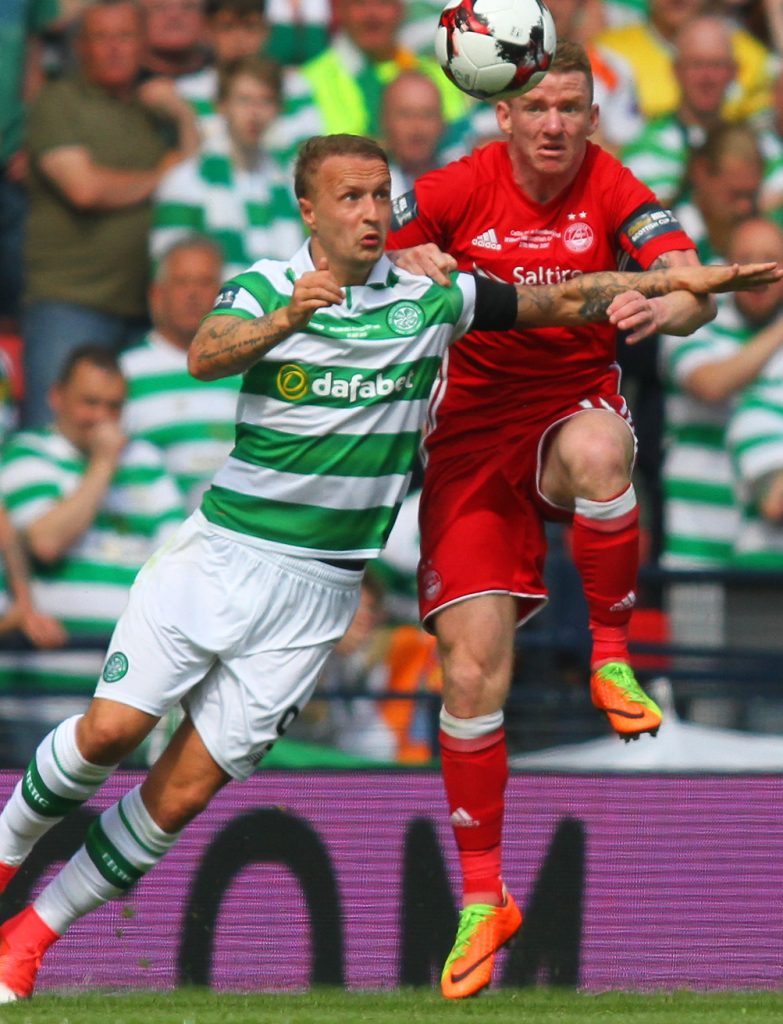 EYES ON THE BALL…Leigh Griffiths and Dons dangerman Jonny Hayes in a tussle for possession. 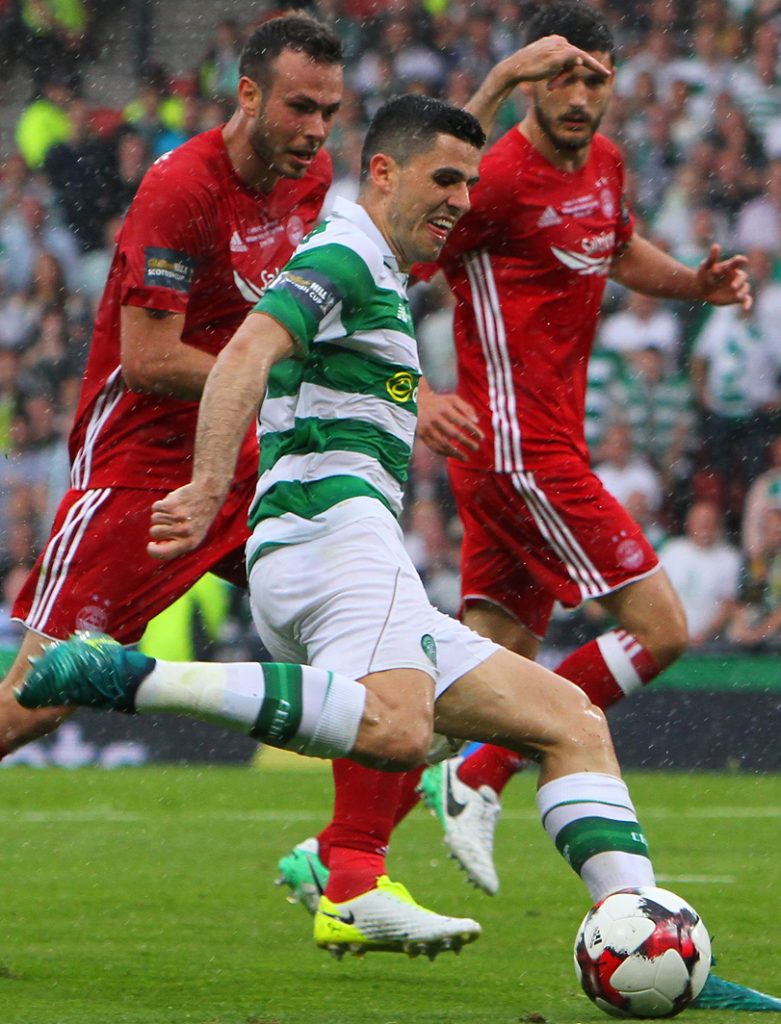 BY THE RIGHT…Wizard of Oz Tom Rogic prepares to deliver the winning touch. 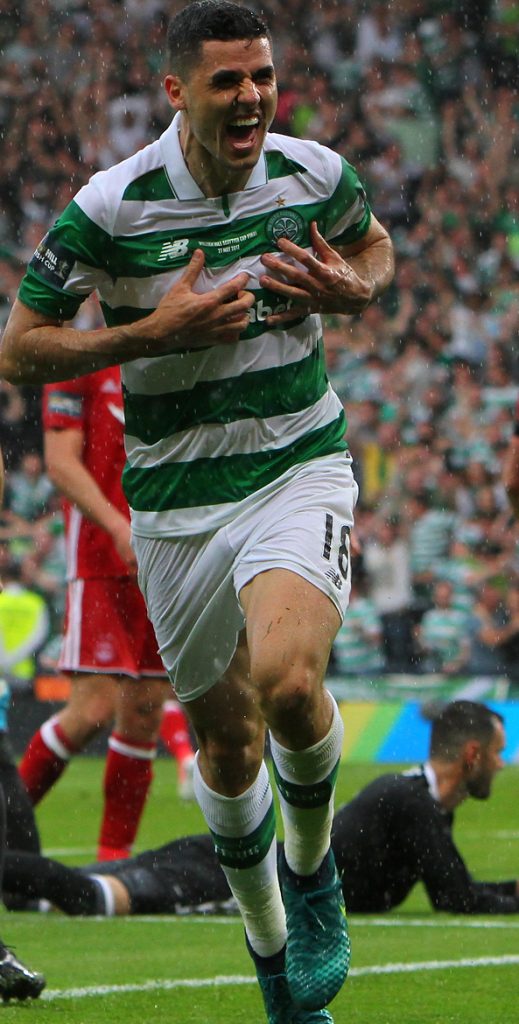 SINGING IN THE RAIN…Tom Rogic is all smiles as Joe Lewis lies beaten at the second goal. 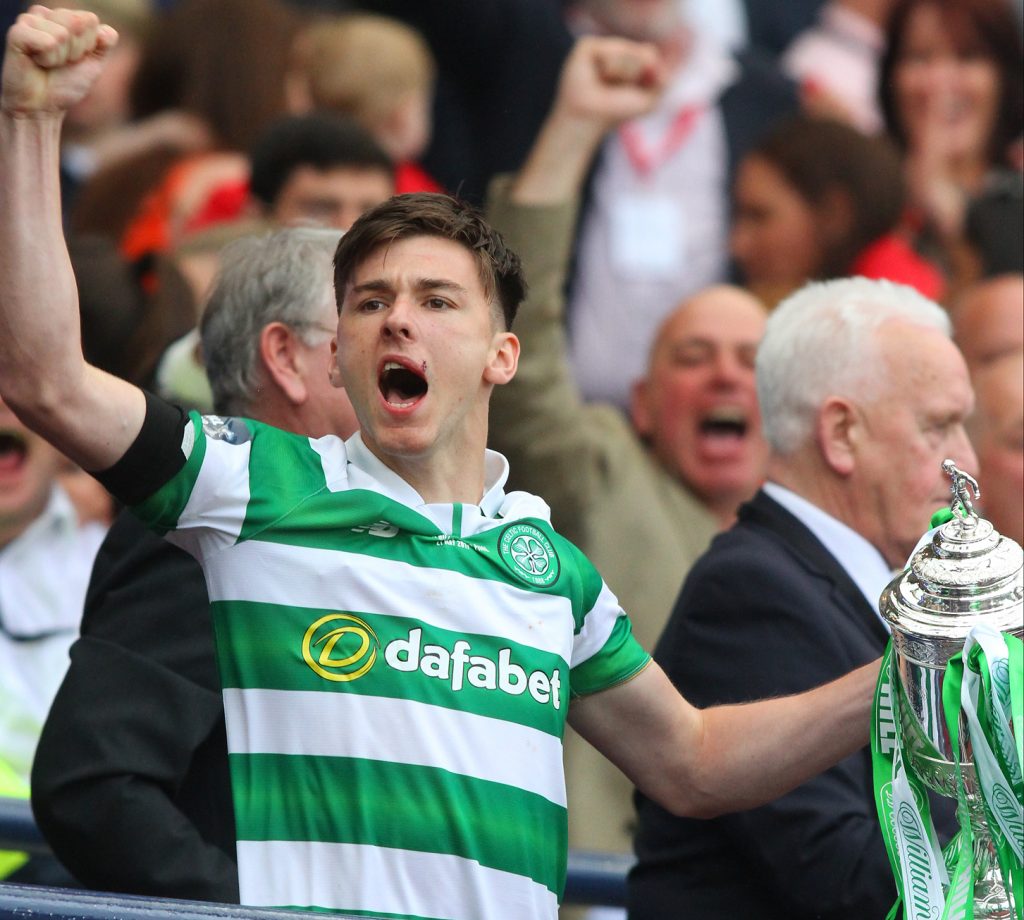 HAMPDEN HERO…Kieran Tierney forgets about his facial injury as he celebrates at the Cup presentation. 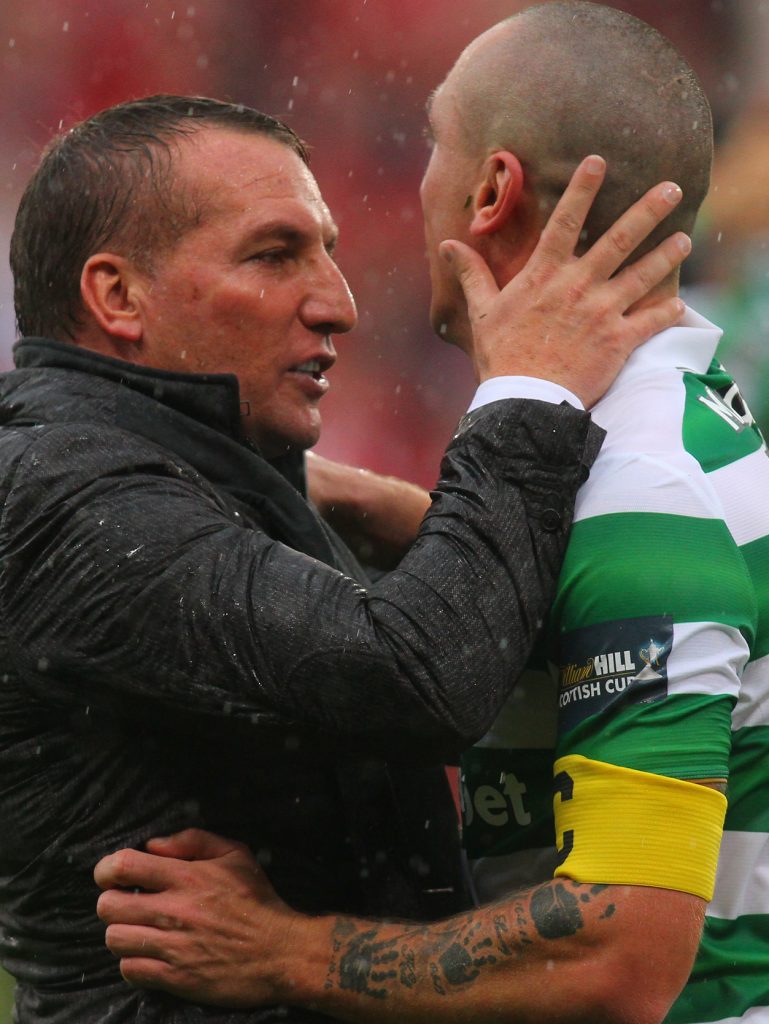 *DON’T miss the unbeatable match report and best action images from Celtic v Aberdeen this afternoon – only in your champion CQN.