Celtic Quick News on News Now
You are at:Home»Latest News»CELTIC v COPENHAGEN: ALL YOU NEED TO KNOW
By CQN Magazine on 27th February 2020 Latest News

SKIPPER Scott Brown and winger James Forrest, who missed the 3-1 weekend win over Kilmarnock, are poised to return for Celtic’s Europa League clash with FC Copenhagen at Parkhead tonight.

The Hoops’ inspirational midfielder limped off with a calf problem after 73 minutes on the 1-1 draw in the first leg in the Danish capital last week while the Scotland international attacker sustained a knock.

Neil Lennon confirmed the two big-game players will be fit to face the Danes.

Ryan Christie, booked in the first match, is banned and that could open the way for Tom Rogic for a rare start in 2020.

Midfielder Olivier Ntcham remains out with a calf injury. Israeli international defender Hatem Abd Elhamed, who has been missing since the 2-1 victory over Lazio in Rome in November, is working his way back from a groin injury while forward Mikey Johnston is still out. 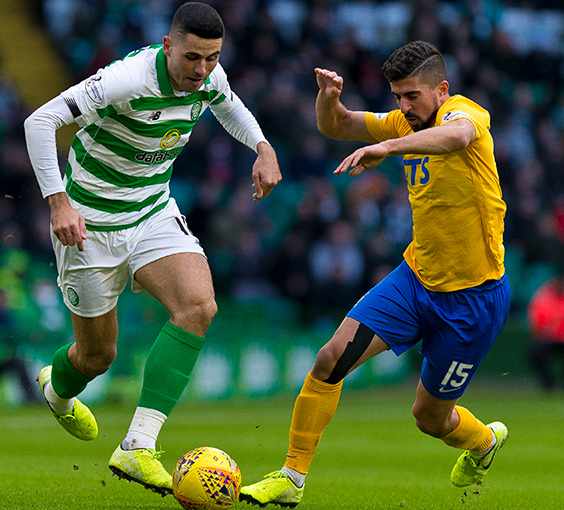 IN THE RUNNING…Tom Rogic in action in the 3-1 win over Kilmarnock.

CELTIC are winless in their last four European games against Danish opponents – drawing two and losing two. However, they are also unbeaten Danes on home soil – playing six, winning four and drawing two. They haven’t conceded a goal in the sequence.

FC COPENHAGEN have drawn four of their last six Europa League games while winning one and losing one,  They will be aiming to reach the last 16 of the competition for the first time since 2016/17 where they were knocked out by Ajax.

CELTIC have set their sights on reaching the last 16 of the Europa League (in its current format) for the first time. They last progressed to this stage of a European competition back in 2012/13 in the Champions League where they met Juventus.

DESPITE qualifying from the group stage, the Danes have scored just six goals in their seven Europa League matches and have attempted the fewest shots of any team to have played six-plus (47).

FOLLOWING his strike in the first leg, no Hoops player has been involved in more Europa League goals in this campaign than Odsonne Edouard (four – two goals and two assists).

*DON’T miss the unbeatable match report from Celtic v FC Copenhagen this evening – only in your champion CQN.