CELTIC will bring down the curtain on an eventful 2020 when Dundee United visit Parkhead on Wednesday afternoon.

Neil Lennon is preparing his troops for another must-win confrontation against the Tannadice men who made life difficult when the clubs met on Tayside back in August.

It was heading for a frustrating goalless draw until Albian Ajeti, the champions’ £5million buy from West Ham in the summer, celebrated his late appearance with the winner.

Lennon, though, will be determined his players won’t leave it so late on this occasion and he could hope for an action replay of one of the last occasions United, then managed by ex-Hoops favourite Jackie McNamara, played the champions in Ronny Deila’s first game in the Parkhead dug-out back on August 16 2014.

Author Alex Gordon recalls a tumultuous season of change after the Norwegian unknown had been tasked with leading Scotland’s title kings in his latest Celtic book, ‘Fifty Flags Plus One’, which has just been published.

THE league kick off was at McDiarmid Park on Wednesday August 13 and was billed as Cup Winners v Champions with St Johnstone lifting the silverware following a 2-0 win over Dundee United at Parkhead at the end of the previous campaign.

It all started enterprisingly for Ronny Deila with his players working their way to a 3-0 victory with Anthony Stokes, Nir Bitton (pen) and Callum McGregor scoring. The match was also notable for the return of keeper Craig Gordon who made his first appearance in a competitive fixture for over two seasons following knee tendon problems and a fractured arm. He made a couple of decent saves and looked sound throughout. Thankfully, reports of his career being in jeopardy evaporated after ninety minutes in Perth.

Three days later, a crowd of 44,484 turned up at Celtic Park wondering what they were about to witness, intrigued and excited in equal measures. Dundee United provided the opposition, but they were a mere sideshow that momentous afternoon. Jo Inge Berget, a Norwegian front player known to Deila, had arrived on loan from Cardiff City in a similar situation to Jason Denayer, a Belgian central defender who had joined from Manchester City.

As the sun shone on Flag Day, following a rousing speech from the club’s former owner Fergus McCann, Celtic went to work and were 3-0 ahead by the interval with efforts from Denayer, Kris Commons and Stefan Johansen. Anthony Stokes added a fourth nine minutes after the restart and Berget also collected two before full-time.

John Rankin hit his side’s consolation goal in a performance the Tannadice manager Jackie McNamara, the former Celt, didn’t waste too many words in attempting to explain. “Embarrassing,” was his succinct summing-up.

Deila, on his debut in Paradise, was a little more expansive. “It was a very good performance, especially the first sixty minutes. There were a lot of things I’m looking for. I’m proud of the players, they worked so hard. We gave the fans what they should have and that’s very good. We want to be an attacking team and play attacking football. We still have a lot to work on, though.” 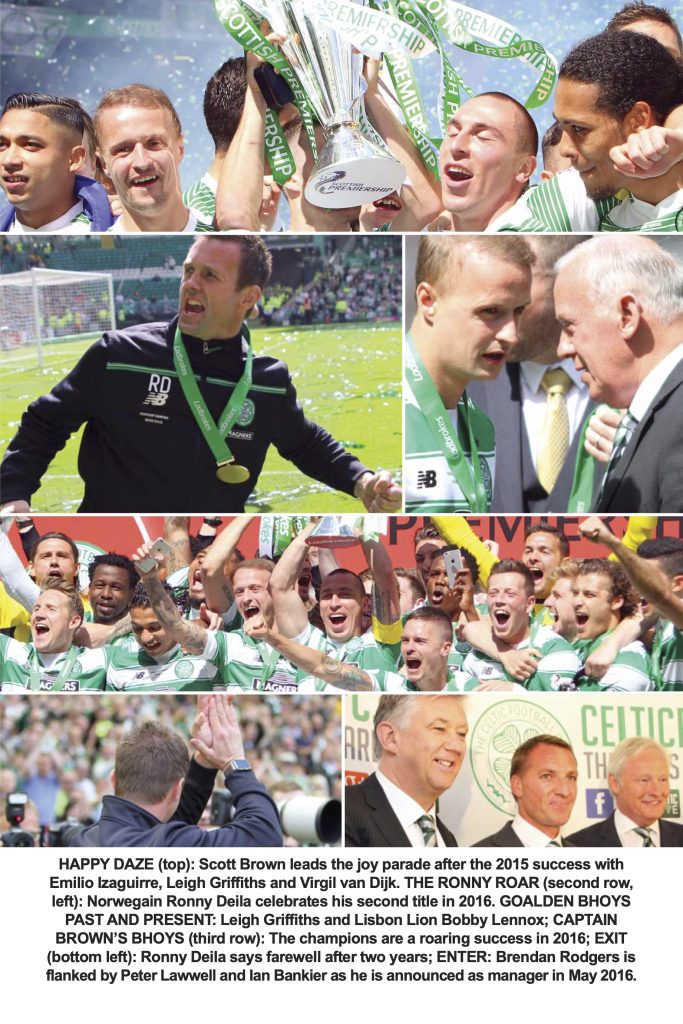 The Norwegian was devastatingly accurate with his final sentence. Four games later, Celtic had exited the Champions League and had dropped five out of six league points. Celtic fans were in a full-blown quandary. Four nights after the six-hit display, Callum McGregor snapped up a rebound to thump in a sixth-minute opener against NK Maribor in Slovenia. The home side came back to equalise in the fourteenth minute through Danjan Bohar and it remained 1-1 with the Scots having the edge before the second leg the following week.

“The away goal is vital,” said Deila who added he “had a good feeling” about the team’s Champions League group qualification prospects.

With an eye on the forthcoming visit of the Slovenians, Deila rested ten players for the league visit to Inverness the following weekend. Lukasz Zaluska was one of the changes in a decision which appeared somewhat odd with Craig Gordon still requiring game time after such a lengthy lay-off. Leo Fasan got the keeper’s stand-by position on the substitutes’ bench and Gordon watched from the Caledonian Stadium stand.

In the sixty-fifth minute, Zaluska made a hash of a clearance when he palmed a cross from the right onto his own central defender Eoghan O’Connell and the ball bounced into the unprotected net for the game’s only goal.

At the shrill of referee Bobby Madden’s whistle at full-time, Celtic had equalled their Premier loss record in Neil Lennon’s previous campaign. It had also been the first time they had failed to score a goal in the league since December 2012.

Asked if the sacrifice of so many players and the loss of three points had been worth it, Deila responded: “You will see on Tuesday if I regret it or not.”

The gift of a goal to NK Maribor’s Brazilian striker Morales Taveres fifteen minutes from time, presented by some abject defending from Efe Ambrose and Emilio Izaguirre, ended the club’s hopes of reaching the group stages of the Champions League for the third successive season. Celtic now had a place in the Europa League to look forward to. It didn’t seem much of a consolation to the fans who disconsolately trooped out of the ground.

Next up was a trip to Dens Park and the loss of a goal inside the first minute as Dundee defender James McPake rose unchallenged to a right-wing corner-kick to leave Craig Gordon helpless. Substitute Leigh Griffiths rescued Celtic with a fifty-fifth minute equaliser. No-one was impressed following another dull, uninspiring display.

Deila knew he had to respond to criticism, so he paid £2.2million to Sporting Gijon for Serbian striker Stefan Scepovic. He had scored twenty-three goals in forty-one appearances for the second-tier Spanish side. His scoring rate dipped dramatically in Scotland where he managed six strikes in twenty-four outings and was smuggled back to Spain on loan to Getafe and they later took him off Celtic’s hands on a permanent basis for a fraction of what had been originally invested.

The recollection of an intriguing 2014/15 season is told with insider knowledge by Alex Gordon, a former Sports Editor of the Sunday Mail, whose latest book, ’50 Flags Plus One’, is hailed by Lisbon Lion Bertie Auld as “a truly unique tribute to Celtic”.