Celtic Quick News on News Now
You are at:Home»Latest News»CELTIC v KILMARNOCK: ALL YOU NEED TO KNOW
By CQN Magazine on 22nd September 2019 Latest News

ONE of Celtic’s most impressive Premiership performances last season was the 5-1 thrashing of Steve Clarke’s Kilmarnock side at Parkhead om December 8 last year.

The champions fired on all cylinders against difficult opponents and were an amazing FOUR goals ahead at the interval.

James Forrest got the ball rolling with the opener in the fifth minute and Odsonne Edouard (25) and Mikael Lustig (35) joined in before Ryan Christie scored with a memorable long-range free-kick that ripped into the net, leaving keeper Daniel Bachmann motionless. Forrest rapped in up with the fifth in the 66th minute.

* THE Ayrshire side’s next visit to the east end of Glasgow was on April 27, five days after Lisbon Legend Billy McNeill passed away.

Remarkably, centre-half Jozo Simunovic scored the only goal of the game with a header from a right-wing corner-kick – in the SIXTY-SEVENTH minute. 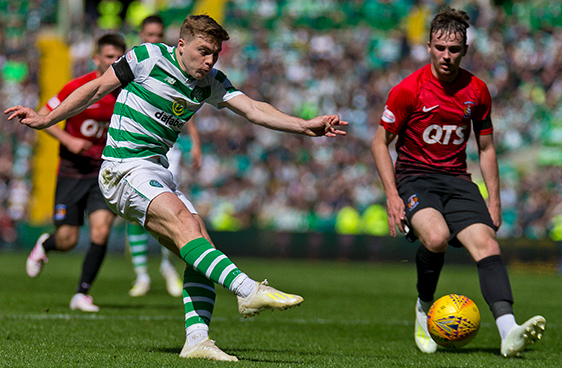 BY THE RIGHT…James Forrest fires in a shot against Killie.

* CELTIC have won their last three meetings with Killie since a 2-1 defeat at Rugby Park in September 2018 A last-minute strike from Scott Brown gave the Hoops a 1-0 success in Ayrshire on on February 17.

* CELTIC are unbeaten in seven games since a 4-3 loss at home to Cluj in the Champions League play-off .