The on-loan keeper has spent the last five seasons with Southampton in the Premier League following his £10million switch in August 2014.

Forster, who has agreed a season-long temporary deal, admits he has been amazed by the young talent that the champions possess.

The skyscraper custodian, speaking to the Evening Times, said: “I have been surprised at just how good they are.

“I knew there was a good squad here the second I came through the door, but until you actually see people in training and day in day out and you see what they can do .

“The young lads, especially, are so talented. As they gather that experience, they are just going to get better and better.

“Ryan Christie has been absolutely brilliant. Even from that very first game I watched, he was so positive. Everything he does, he looks to get turned and play up the pitch.

“Odsonne Edouard’s been brilliant. He’s such an exciting talent. He’s another one when you see him in training that you really appreciate his quality.

“He’s a fantastic player and we’re very fortunate that he’s in our squad and team.

“I just think we’ve got such a good mix of youth and experience. 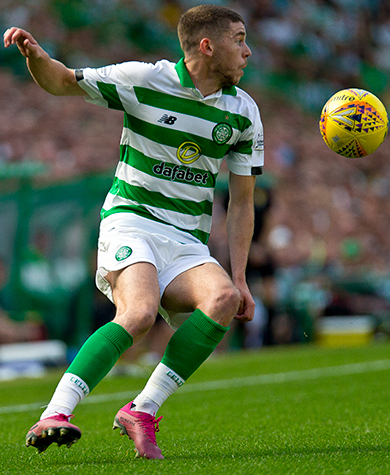 EYES ON THE PRIZE…Ryan Christie in action.

“It’s hard when you compare with north and south of the border. I definitely don’t see this as being a step down or backwards.

“Ultimately, I’ve come here to win trophies and compete at the top of the league. Not many people in football get to go out and do that and try and win competitions.

“I think we’d do alright. Looking at what we’ve got in the dressing room and the team we’ve got, there’s no reason why we wouldn’t have a comfortable season in the Premier League.”

Christie, in particular, has started the campaign in whirlwind fashion and he claimed his 10th goal of the season when he knocked in the third in the 3-1 triumph over Kilmarnock at the weekend.

The Highlander, of course, completed the previous term early after a mid-air assault from Aberdeen’s Dom Ball in the Scottish Cup semi-final in April that saw him received multiple facial injuries.

That put the Scotland international playmaker on the sidelines as the Hoops sealed their historic treble treble triumph.

Chsristie has hit the ground running this time out and it’s easy to see why his new team-mate Forster has been mightily impressed.