Club president Zdravko Mamic confirmed he turned down an offer for the central defender after meeting Hoops chief executive Peter Lawwell, who was in Zagreb for talks, but could not seal an agreement.

Before flying to Albania for tonight’s Champions League qualifier against Skenderbeu, the Dinamo chief admitted: “Yes, we refused Celtic. I’m glad that Jozo stays with us. His price and his quality will still grow big.”

Celtic must decide on whether or not to make an improved offer for Simunovic, a deal revealed by CQN on Saturday.

Or they could attempt to get Jason Denayer on another season-long loan from Manchester City; a story we broke first on Monday.
The Belgian defender, who was outstanding at Parkhead last term, is set to be pushed further down the pecking order at the Etihad with the imminent £28.5m arrival of Valencia’s Nicolas Otamendi.
Celtic’s move for Simunovic and strong interest in Denayer’s position would suggest Virgil van Dijk may be allowed to leave, particularly if Celtic fail to overcome Malmo in the Champions League qualifiers.

Southampton are confident of landing the Dutch ace, but Celtic boss Ronny Deila is hoping the player may stay with the incentive being the chance to experience the Champions League group stages.

And the manager is not convinced tonight’s Malmo clash will be a last outing for van Dijk in front of the Hoops fans. 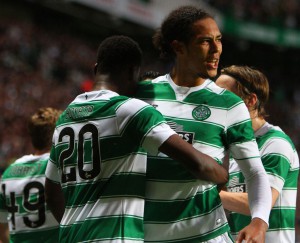 On the speculation that Van Dijk will shortly leave the club, Deila said: “I wouldn’t say that. We’re in control and he’s a Celtic player who still has a long contract here. I hope we can have him longer than these European games.”

Deila also issued a vote of confidence in Dedryck Boyata after his errors gifted Inverness Caley Thistle two goals in the 4-2 weekend win.

He said: “Dedryck was one of our best players against Qarabag. People are talking about the game against Inverness, but that’s just two things.

“It can happen to anyone. I wouldn’t swap our two central defenders with many players in the world.”