PREMIER Sports have confirmed the Celtic v Ross County opener in the Betfred League Cup at Parkhead on Sunday November 29 will be broadcast live, as CQN reported.

Neil Lennon’s men will kick off their bid for a FIFTH successive silverware triumph in the competition against the Highlanders they overwhelmed 5-0 earlier in the season in the Premiership in Dingwall.

Now the all-conquering Hoops will commence this term’s efforts with a 3pm start in the east end of Glasgow as they attempt to reach the grand finale at Hampden on Sunday February 28 next year.

Remarkably, the holders haven’t conceded a solitary goal in the four finals at the national stadium as they have lifted the trophy in fine style.

The Parkhead heroes’ spectacular successes in the competition are highlighted in the Celtic: Treble Treble publication. 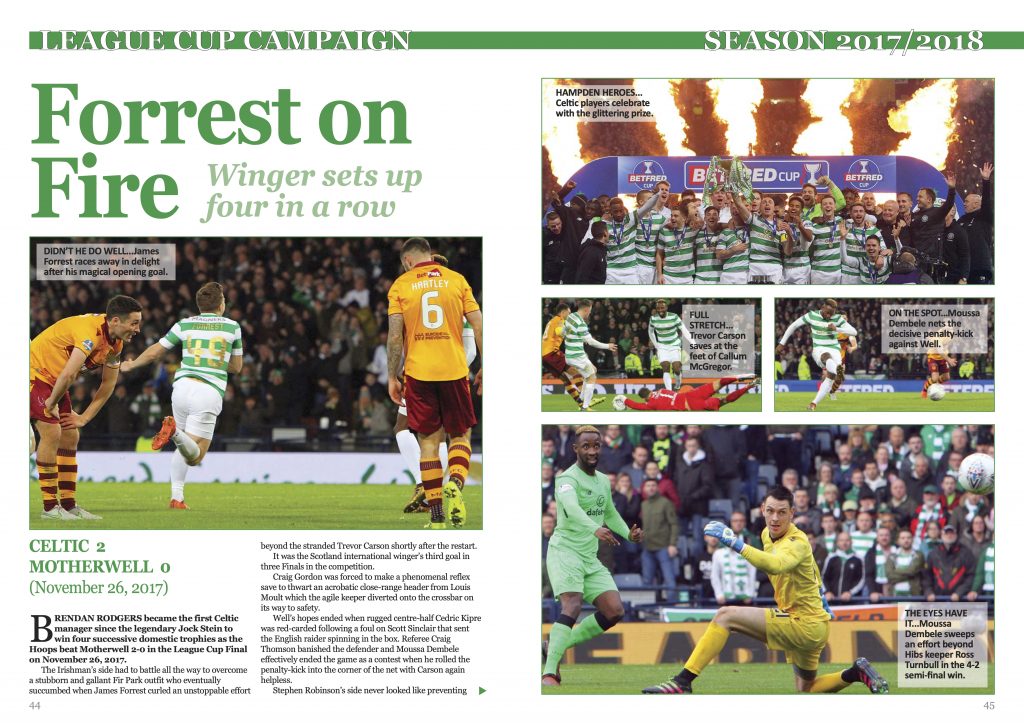 Goals from Tom Rogic, James Forrest and Moussa Dembele gave Brendan Rodgers’ men a 3-0 win over Aberdeen in November 2016 and a year later Forrest and Dembele were on target again to dump Motherwell 2-0. The bandwagon rolled on in 2018 when a superb effort from Ryan Christie just before the interval was enough to overcome a battling Dons outfit.

Craig Gordon had kept a clean sheet in the first two victories while Scott Bain was the man in charge of the gloves against the Pittodrie outfit for the third confrontation. Fraser Forster turned in a Man-of-the-Match performance last season when a strike from Christopher Jullien sealed the trophy against Steven Gerrard’s Ibrox club.

The towering six times-capped England international netminder capped a memorable display with a penalty-kick save from Alfredo Morelos.

Now the No.1 position is up for grabs with £4.5million Greek shotstopper Vasilis Barkas and Bain vying for top spot in Lennon’s line-up.