THE SIR CHRIS HOY Velodrome sits in the shadow (literally, on certain crisp Glasgow mornings) of the colossal Celtic Park stadium, but remarkably little is known of the connection between track cycling and Celtic Football Club.

The visitor who walks a few yards through that shadow finds himself at the home of one of the most historic football clubs in the world. More recently, Celtic Park was the venue for the opening ceremony of the 2014 Commonwealth Games, where Geraint Thomas, Alex Dowsett, Lizzie Armitstead and Laura Trott were among the gold medalists. 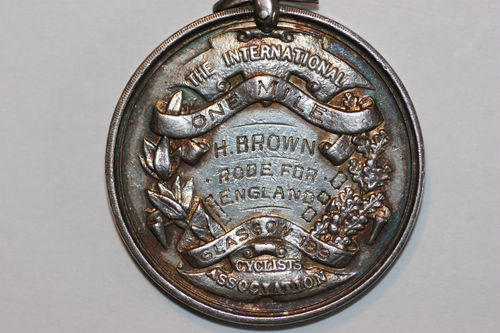 Celtic Park’s connection to cycling dates back to the early years of Celtic FC and their quest for survival. The club was formed in the late 1880s with the objective of feeding the immigrant (Irish) poor of Glasgow’s East End by raising funds for ‘The Poor Children’s Dinner Table’ charity to which it had been instituted. In order to fund such ambitions, the club needed to find additional sources of revenue to finance stadium maintenance and to pay functional staff. Cycling events were one of a few ideas that the club trialled in 1891, and provided a vital lifeline.

A year later, in 1892, after ground rent rose by 800 per cent from £50 to £450 a year, Celtic FC relocated 500 metres from their original home to a disused brickyard – the current Celtic Park site. The move was a huge operation, which required a large volunteer workforce to shift 100,000 cartloads of earth to plug a 40-foot crater, half-filled by water.

The club’s committee held a meeting to look at ways of increasing revenue once more, to fund floodlighting and install a press box. The popularity of cycling was discussed and given its previous success with the club, the sport was looked upon as a positive revenue stream. With that in mind, a cement track, as opposed cinder – a feature of many football clubs of the time – was constructed. The track circulated the field and measured at three-and-a-half laps to the mile. 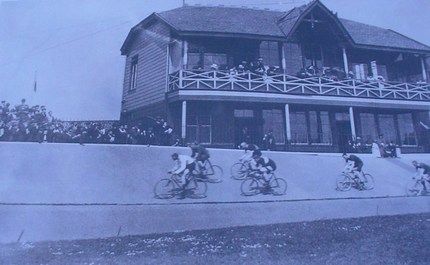 Cycling events took place at the new Celtic Park from 1893, throughout the decade. Headline events included Scottish/Irish meetings. Scottish Championship winning riders such as R A Vogt even used to practise at the stadium. The decision to build the track proved a success and the vision to act on cycling’s popularity was rewarded, with race attendances regularly surpassing 10,000 people. However, the pinnacle of Celtic Park’s cycling history was reached in 1897.

The track World Championships had been held since 1893, but had yet to take place in the UK. All that, however, was about to change. The cement track, along with the facilities to accommodate enormous crowds, made Celtic Park an excellent choice to host the competition. According to contemporary reports from The New York Post, Celtic FC spent $6,000 to build banks nine feet high specifically for the competition. The newspaper also reported that the club had an added leasing cost of $2,500 to the Scottish Cyclist Union. It was a bold decision by Celtic FC to risk so much money, but their confidence again paid off when a crowd of over 8,000 spectators paid entry to the championships. 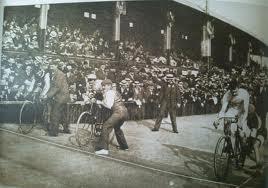 As the years went by and Celtic Park underwent various renovations, not least after two fires, the look of the stadium changed drastically. Despite this, a flattened track could still be seen surrounding the perimeter of the pitch up until the 1990s, when Celtic Park was dramatically upgraded to an all-seated stadium with capacity for 60,000 supporters.

Should you find yourself feeling the chill of the shadow that overhangs the Sir Chris Hoy Velodrome, take a moment to reflect: beyond its uniquely charitable roots or the feat of becoming the first British football club to win the European Cup, there is another, lesser known heritage at Celtic FC. How fitting that Scotland’s leading cycling facility should be based just yards from Celtic’s earliest cycling history.

Written by Liam Kelly for CQN. Liam’s book, ‘Our stories & Our Songs’ was published in December 2015.