CELTIC will kick off their Europa League campaign against Rosenborg on September 20 – and will be hoping for an action replay.

The teams met in the Champions League second round qualifier at the same venue in July and Brendan Rodgers’ side triumphed 3-1 with Odsonne Edouard (2) and Olivier Ntcham on target.

The Hoops, who were also drawn against RB Leipzig and Salzburg in today’s ballot, will face a hat-trick of early kick-offs on their travels as they bid to extend their interest in Europe beyond Christmas. 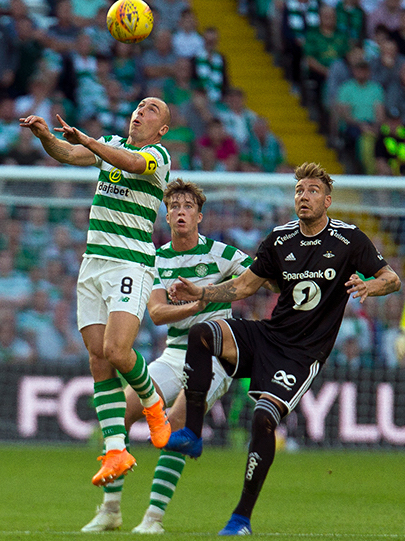 AIR WE GO…skipper Scott Brown shows his aerial ability against Rosenborg in the 3-1 win in July.

After the Norwegians in Glasgow, the champions travel to Austria to play Salzburg in a 5.55pm kick-off on October 4 – the same time as their clash away to RB Leipzig on October 25.

The Hoops then welcome the Germans of Leipzig to Parkhead on November 8 before travelling to meet Rosenborg on November 29.

A home clash with Salzburg on December 13 could be be the make-or-break confrontation before the knock-out stages kick in.