It’s the confrontation which will decide if Ronny Deila’s men reach the money-spinning group stages of Europe’s elite tournament. 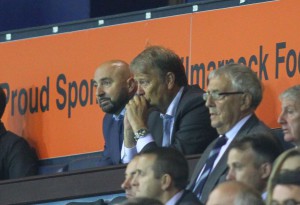 The Hoops’ first leg game against the Swedes at Parkhead on Wednesday is already scheduled to be beamed live by BT Sport Europe. It, too, will have a 7.45pm start.

The satellite giants, who now have exclusive screening rights to the Champions League and the Europa League, have already shown the SPFL champions’ two away qualifiers this season.

They televised the 4-1 win over Stjarnan in Iceland in the opening qualifying game and also the 0-0 draw with Qarabag in Azerbaijan at the second stage.

Manchester United’s two Champions League qualifiers will also be shown live. They face Belgian outfit Brugge in the opening tie at Old Trafford on Tuesday while the return will go ahead on on Wednesday, August 26.