CELTIC enjoyed one of their most sensational silverware sequences in their glorious history when they embarked upon a breathtakingly victorious trek as season 1968/69 came close to its conclusion.

Even by the remarkable standards set by Jock Stein’s great side, this was exceptional. A collection of gifted and highly-motivated individuals sparked in unison to see off all their rivals as they swept into the annals of fame.

Author Alex Gordon looks back at an unforgettable three weeks in April 1969 when Big Jock’s heroes won a spectacular trio of domestic honours. Alex chronicles the remarkable achievement in his Celtic tribute publication, ’50 Flags Plus One‘, in a glittering and breathtaking twenty-one days of joyous celebration.

The club’s 24th championship – and their fourth crown in a row in the team’s original record-breaking nine-in-a-row sequence – arrived at Rugby Park in a 2-2 draw on Monday, April 21 and was in the middle of memorable landslide Cup Final triumphs.

The Hoops were heading for a shock 2-1 defeat in Ayrshire until they launched one last determined attack on the Killie goal. Alex, a veteran of 15 Celtic books, recalls: “Everyone remembers my pal Tommy Gemmell’s famous goals in the European Cup Finals against Inter Milan and Feyenoord.

“And he also fired in a penalty-kick in the World Club Championship Final second leg against Racing Club in Buenos Aires in the three-game fiasco against the South Americans.

“But who can remember Big Tommy scoring the goal that clinched the title in 1969? With the referee looking at his watch and time ticking down on Celtic, the adventurous left-back surge forward to get on the end of a right-wing cross and lash a low drive wide of keeper Sandy McLaughlin. The championship was heading back to Paradise at that precise moment.” 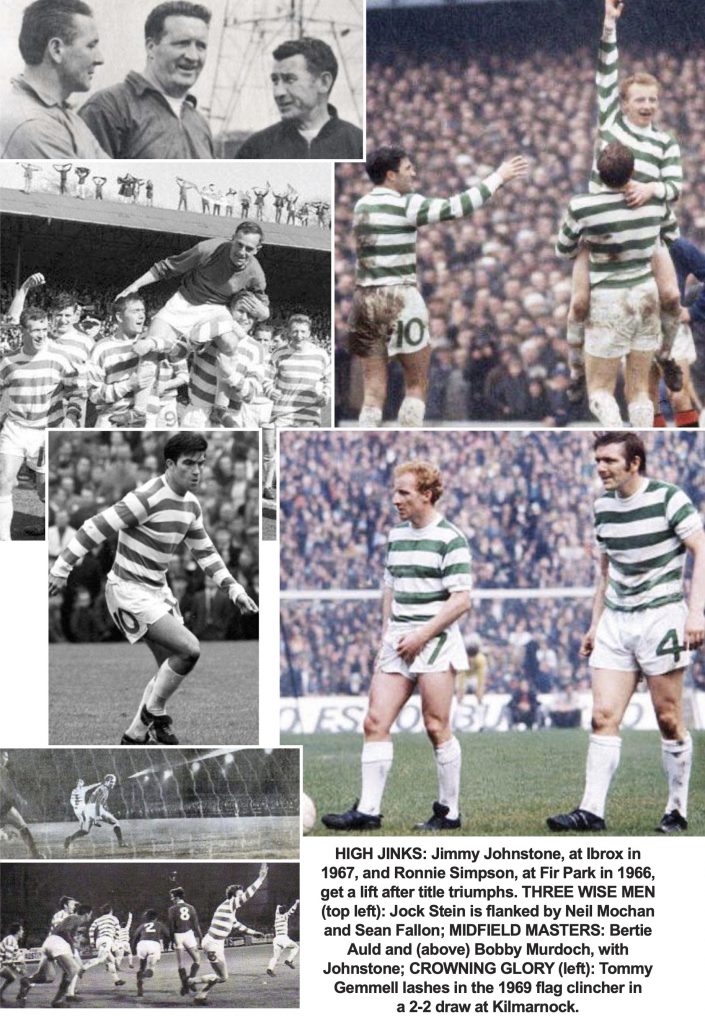 Jock Stein’s team of all-stars had already claimed the League Cup on April 5 with a runaway 6-2 success over Hibs where Bobby Lennox fired in a hat-trick and Bertie Auld, Willie Wallace and Jim Craig added the others.

They returned to Hampden three weeks later for another carnival occasion with a rollicking 4-0 triumph over Rangers where they were three goals ahead at half-time following an irresisitible performance with Billy McNeill, Lennox and George Connelly all tucking the ball behind the helpless and mesmerised Norrie Martin. Stevie Chalmers supplied the fourth as Celtic went through their party pieces.

The phenomenal conclusion to another memorable campaign is told with insider knowledge by Alex Gordon, a former sports editor of the best-selling Sunday Mail.