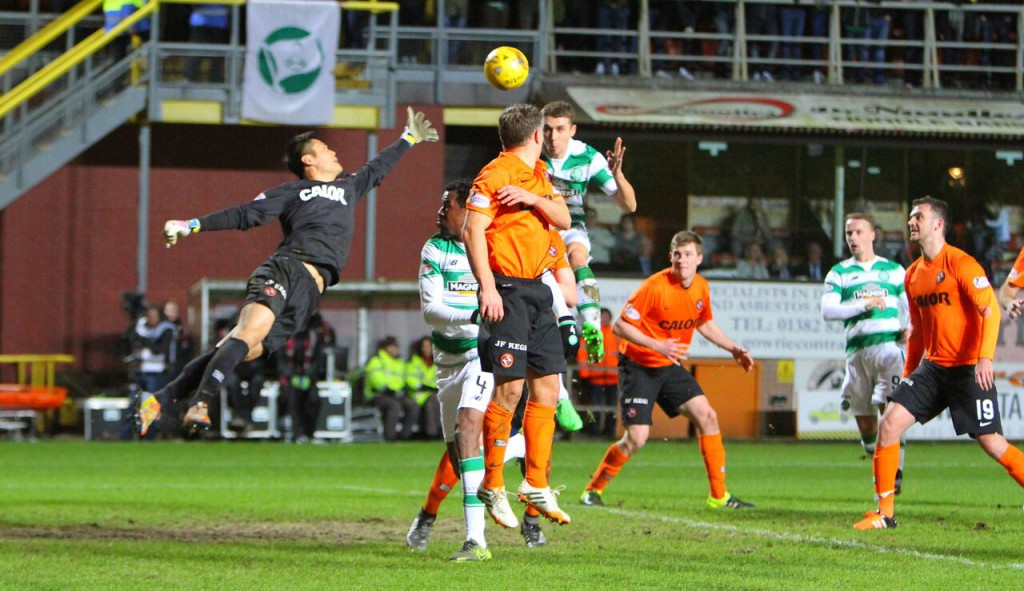 LEIGH GRIFFITHS took his Celtic goal haul to 51 with a double as the Hoops cruised to victory over troubled Dundee United at Tannadice.

Ronny Deila’s men are now six points ahead of Aberdeen at the top of the Premiership as they zero in on their fifth successive title success.

There was never any doubt about the outcome once Griffiths opened the scoring in the 21st minute.

Celtic, in fact, had three good opportunities before the prolific marksman struck once again to underline his worth to the team.

In the seventh minute, a superb cross from the rapidly-improving Keiran Tierney found Stuart Armstrong who first-timed a first-timed a vicious effort just off target.

And then it was Armstrong’s turn again when he cut in from the left to drive a ball wide of the left-hand post with Kawashima helpless.

A goal just had to come and it did in the 21st minute when Tom Rogic forced home the advantage. Gavin Gunning slipped at the crucial moment and Griffiths capitalised with a drive that thundered low into the net.

Griffiths celebrated the milestone strike by whipping off his top to proudly portray a t-shirt emblazoned with the number 50. Referee Bobby Madden immediately booked him for removing his shirt. Who said rules were for fools? 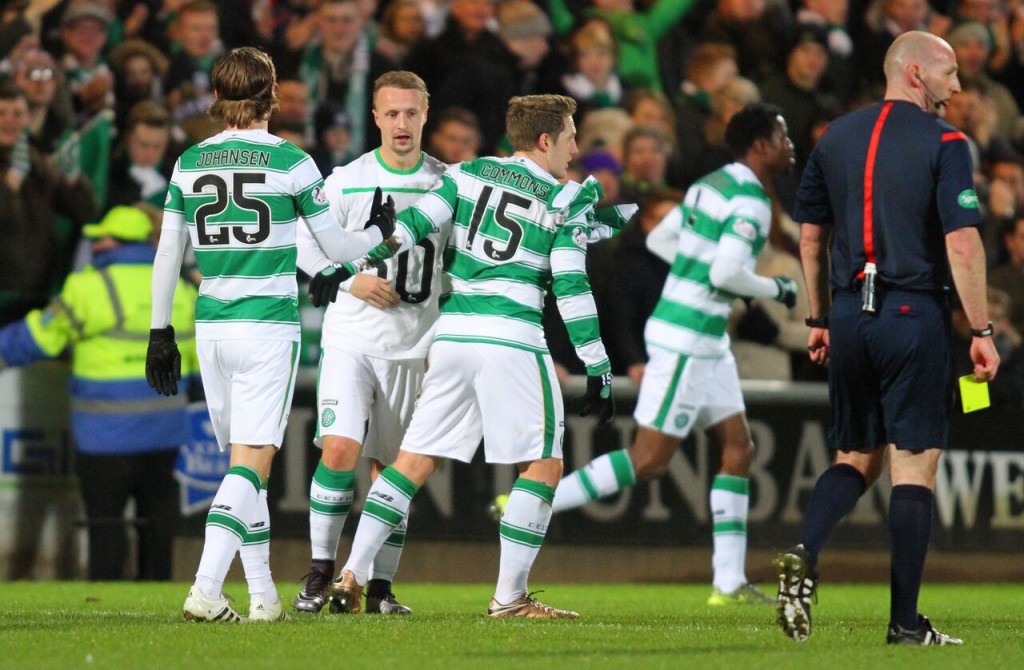 Six minutes later, Jozo Simunovic got in on the act with his first goal for the club since his summer transfer from Dinamo Zagreb.

Armstrong was pulled back by John Soutar and Commons delivered a wonderful free-kick cross into the danger zone. Kawashima got his timing all wrong as he pawed at the ball and Simunovic rose brilliantly to head into the empty net.

Four minutes later, though, the Tayside outfit were back in the contest when they pulled one back and it must be admitted it was a thoroughly well-worked move that sliced through the centre of Celtic.

It ended with Soutar setting up Simon Murray, running clear of Simunovic, and he deftly touched the ball with the outside of his foot past the helpless Craig Gordon and low into the right-hand corner of the net.

It stung the Hoops into a reaction, but there was still a close call just before the interval when United might have drawn level.

A right-wing corner-kick was missed by everyone and fell for Ryan McGowan at the far post. He nudged it towards goal from close range, but Gordon managed to smuggle the ball clear.

Celtic started the second-half in whirlwind fashion and Gunning was booked for an assault on Stefan Johansen as he raced clear. The keeper did extremely well to dive full-length to push away Common’s ferocious 25-yard free-kick. 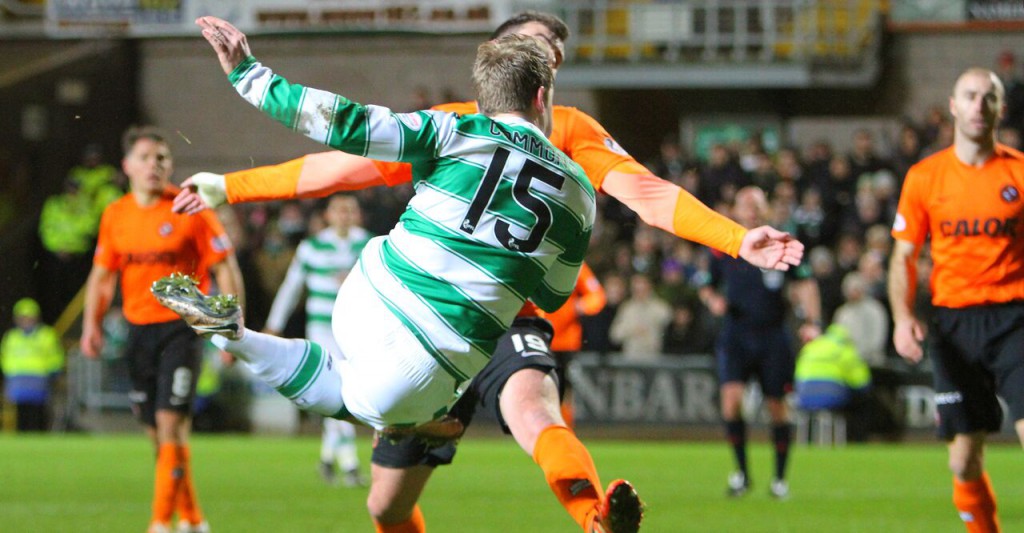 In the 48th minute, United claimed a penalty-kick when Murray raced through between Efe Ambrose and Simunovic, but his first touch was clumsy, he lost control of the ball and then careered into Gordon.

The home players swarmed around the match official, but it was clear there was no intention of a foul by Gordon and he waved play on.

Within seconds, Celtic were 3-1 ahead and once again it was chance-snatcher supreme Griffiths who claimed the goal.

Rogic slipped the ball outside to Mikeal Lustig, the right-back knocked the ball into the penalty box and Griffiths was perfectly placed yet again to rifle a low right-foot effort wide of the keeper.

It was all over in the 56th minute when Commons netted a marvellous acrobatic effort that was fit to win any game.

Rogic was involved again as he set Armstrong free on the left. He curled over and inviting cross to the back post and Commons defied gravity as he took off in spectacular fashion to hook an unstoppable effort high into the net.

Ten minute later he had the ball into the net again after a Griffiths pass only to be ruled offside. TV pictures showed John Rankin had clearly played him onside. 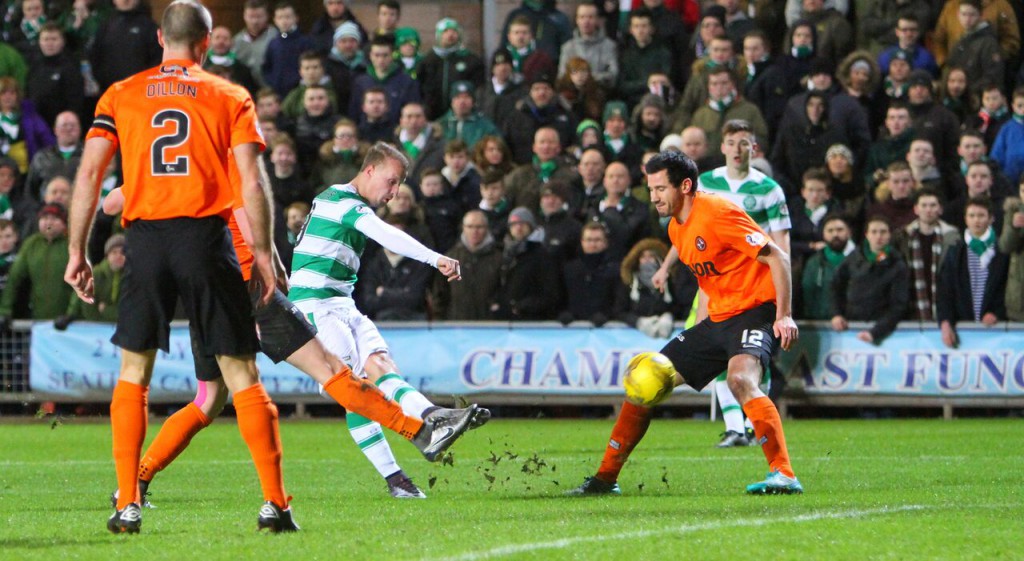 Both linesmen had given strange decisions against Celtic all night, but, having said that, United might have had a penalty-kick when the ball hit substitute James Forrest on the hand, but the ref wasn’t interested in the United claims.

The Hoops had opportunities to stretch their lead, but, at the end of a sizzling 90 minutes on a freezing evening on Tayside, they will be happy to collect three more points.

A quick word, too, about the display from Ambrose. The Nigerian defender has been the fall guy on a few occasions this seasons, but he was rock solid on this occasion. He didn’t try anything fancy, refused to embark on some crazy forward runs and played it safe throughout. He looked a class act alongside Simunovic and was well worth the fans chanting his name during the second-half.

All in, it was a good night at Tannadice with the away support in magnificent voice. See below for tonight’s smoke bomb courtesy of the home support. 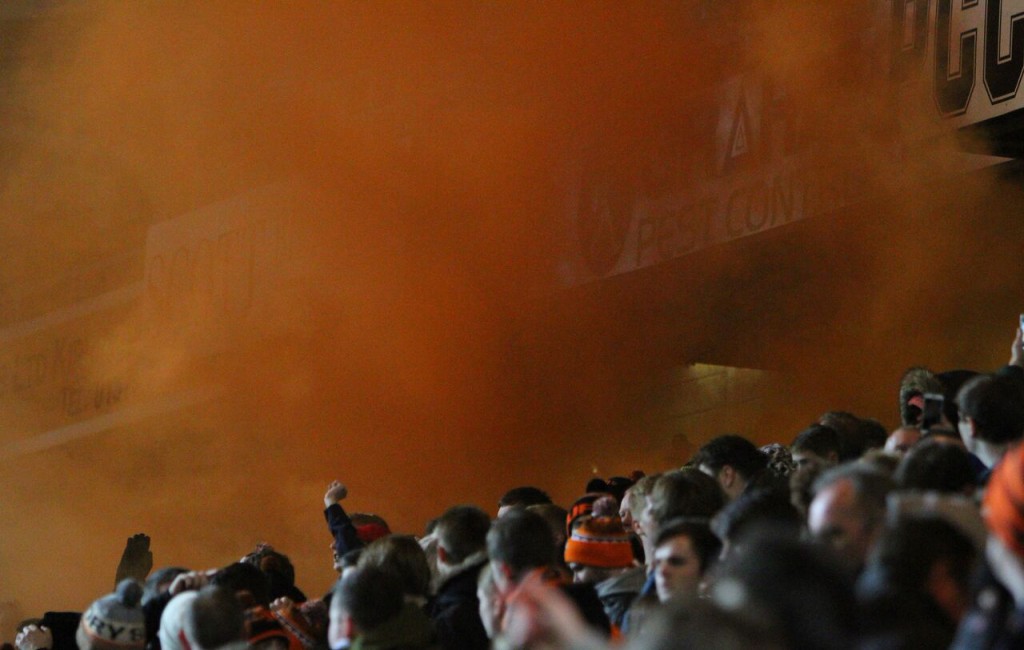 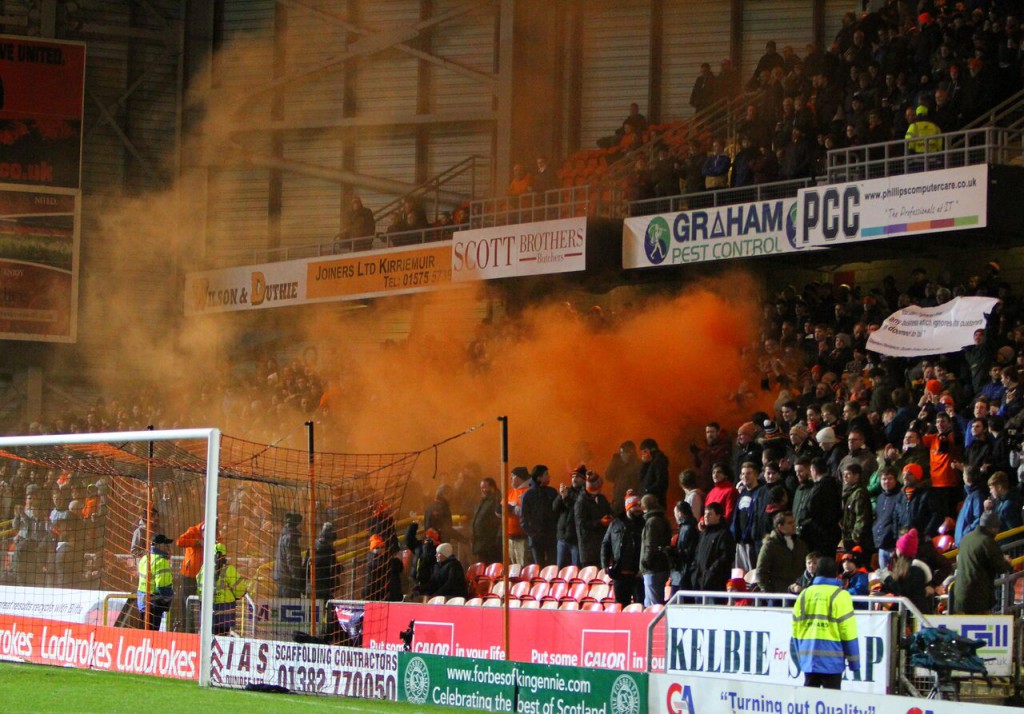 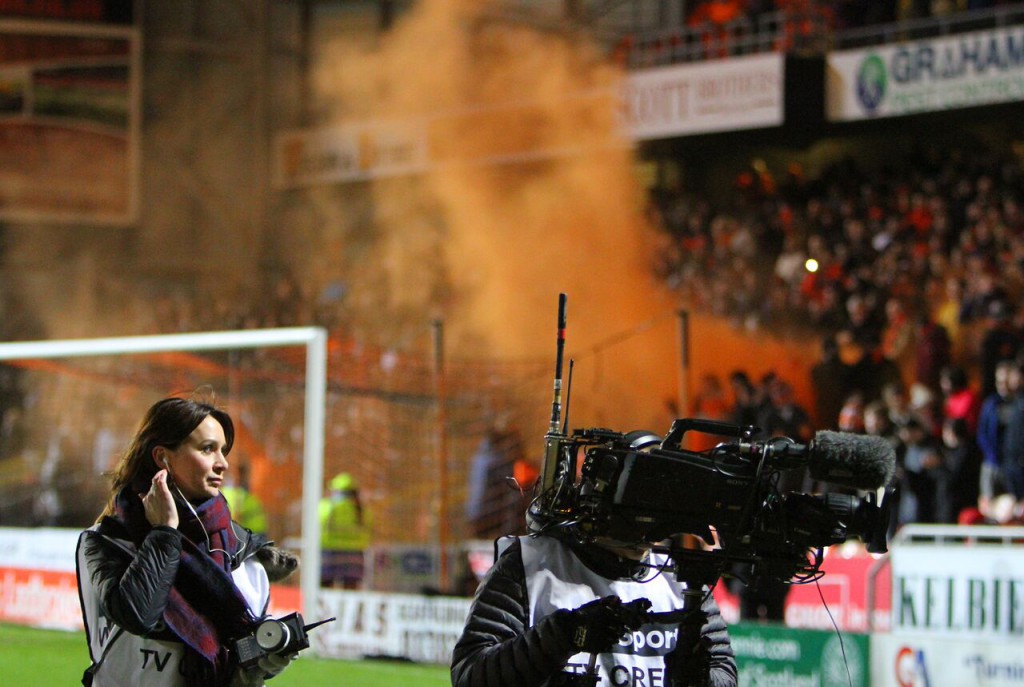