Celtic Quick News on News Now
You are at:Home»Latest News»‘CELTIC’S NAME IS ON THE CUP,’ INSISTS HOOPS HERO
By CQN Magazine on 19th May 2018 Latest News

CELTIC hero Joe Miller reckons history will repeat itself at Hampden this afternoon.

The former Hoops frontman was part of the team that overcame Dundee United 2-1 in a dramatic Scottish Cup Final in the club’s centenary year in 1988.

He said: “Thirty years ago, we believed Celtic’s name was on the trophy. It’s a similar scenario today with my old club looking to make history by becoming the first Scottish team to win a double treble.

“It’s in the stars that there will be green and white ribbons on the Scottish Cup when the referee blows for time-up at the national stadium.

“Back in 1988, the club was celebrating its 100th birthday and it just seem right and fitting we would bring down the curtain on such a remarkable season with a Hampden triumph.

“It’s was Billy McNeill first year after returning from his spell in England with Manchester City and Aston Villa and it seemed fate had led him back to his spiritual home.

“Billy deserved awesome credit for turning things around. He had to rebuild a squad that had seen players such as Brian McClair, Murdo MacLeod, Mo Johnston and Alan McInllay all leave at the same time.

“Fortunately, he signed me from Aberdeen in November, a month after bringing in Frank McAvennie from West Ham.

“So, it really was Billy McNeill’s team that played for most of that momentous campaign. Celtic sealed the league title with a 3-0 win over Dundee and, three weeks later, we were due to face Dundee United in the Cup Final.

“Every player in that squad was convinced nothing could stop us claiming the silverware that afternoon.

“Even when Kevin Gallacher scored for United shortly after the turnaround, we were completely unshakeable in our belief we would ultimately succeed.

“My old mate McAvennie equalised and then we went for the winner. Instinctively, we knew it would come. Time was ticking down when I hit a right-wing corner-kick to Billy Stark who sent it in the penalty box. It came off a defender straight to Frank and he never missed from six yards. He whacked it into the inviting net and it was party time.” 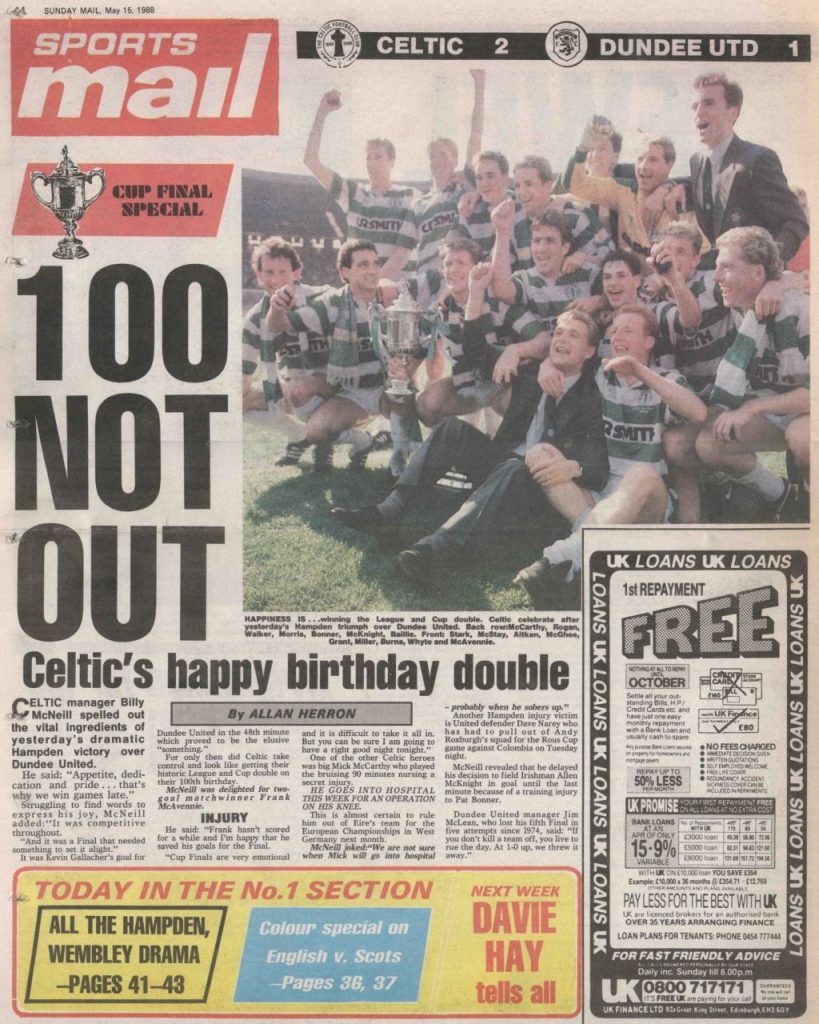 Miller said: “Possibly, Brendan Rodgers’ players may have that sense of feeling they are on the brink of a fabulous achievement. Only one match separates them from a feat that has never been done by any other team.

“And Celtic have got the big-game players to handle the tension and expectation levels during an occasion such as this. You don’t have to look any further than skipper Scott Brown for inspiration.

“Broony has been incredible over the past two years, his consistency has been awesome. A lot of people were writing him off before Brendan arrived, but he has answered his critics in some style.

“I think Tom Rogic agreeing a five-year deal is fantastic, as well. The Aussie was the matchwinner against Aberdeen last year and he could conjure up something against Motherwell today.

“He’s a flair player with that little extra something in his locker and he’s a nightmare for the opposition to pin down. For a big guy, his close control is amazing. I can see him marking his contract extension with something special.”

The ex-Parkhead raider warned the Hoops, though, they will have to earn their place in the annals of fame.

Miller added: “Stephen Robinson has done a brilliant job at Fir Park. To get the club to two Cup Finals in one season is no mean feat.

“Obviously, he has the players giving him their all and playing for him and their colleagues. They are a big, physical team, too, but I don’t think Celtic will be bullied. They’ve got guys in their team who can look after themselves.

“The referee, Kevin Clancy, has an important role to play, of course. It’s always nice for the Scottish Cup Final to be a spectacle, something to remember for all the right reasons. So, I’m hoping for both teams to put on a show.

“At the end, though, I can’t envisage anything other than a Celtic triumph and an unprecedented back-to-back silverware treble.

“Overall, as Billy McNeill’s players believed 30 years ago, they might just have the genuine feeling they are about to make history.”