CELTIC boss Brendan Rodgers is on the brink of a historic back-to-back treble of domestic honours.

The seventh successive title is on its way – and the Hoops can clinch the flag in real style.

Rodgers’ men are are nine points clear of Sevco Rangers with a game in hand following their dramatic and well-merited 3-2 triumph at Ibrox on Sunday.

And with confirmation of post-split fixtures fast approaching, the Glasgow rivals are expected to meet again at Parkhead in the first round of fixtures on April 22. 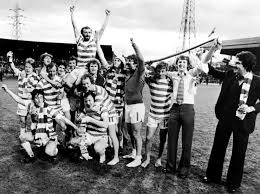 The champions can clinch the championship that afternoon if they finish 13 points ahead of Graeme Murty’s outfit.

With only four games remaining after that encounter, that would leave the Ibrox side trailing in the Parkhead men’s slipstream.

Rodgers’ title holders take on Motherwell, Ross County, Dundee and Hamilton Accies before the top six is finalised, while Murty’s side face Kilmarnock, Motherwell and Dundee.

If the results fall in the expected manner, Celtic could then celebrate the Magnificent Seven in the east end of Glasgow next month.

It will not be the first time they have won the title on home soil against the Ibrox side.

Billy McNeill’s 10 men achieved the feat on May 21, 1979 when they came back to overwhelm John Greig’s Rangers 4-2 after Johnny Doyle had been sent off early in the second-half.

Goals from George McCluskey, Roy Aitken, Colin Jackson (og) and Murdo MacLeod brought the house down as the Bhoys surged to glory.

Now there could be an action replay on the way.