The ex-Scotland international reckons there was a chance Celtic could have slipped up in their quest for a ninth successive championship.

Neil Lennon’s side, of course, were leading the league by THIRTEEN points with only eight games to play and had a superior goal difference of plus 25 on their nearest challengers from Govan when football went into lockdown due to the coronavirus pandemic.

However, Rae, who spent three years at Ibrox after joining from Dundee in January 2004, believes Steven Gerrard’s strugglers, who had dropped 13 points since returning from the mid-winter break and had lost to Hearts, Kilmarnock and Hamilton Accies and drawn with Aberdeen and St Johnstone, could have ended the Hoops’ dominance of the country.

It would have required a seismic collapse in form from Celtic – plus the Govan outfit winning their remaining nine games – to derail Scott Brown, Odsonne Edouard and Co.

SPFL chiefs are now preparing to draw a line under the Premiership campaign which has been in cold storage since mid-March.

It is inevitable the Hoops will be awarded the 51st flag in their glorious history.

Rae, though, is adamant Gerrard’s bunglers, who were also dumped out of the Scottish Cup by rock-bottom Hearts, could still have overcome Lennon’s side.

The 42-year-old, speaking to The Herald, said: “Celtic are so far in front at the moment and they’ve been the form team since January.

“They’ve looked like they were going to win the title. But that wasn’t mathematically definitive, they could still be caught. 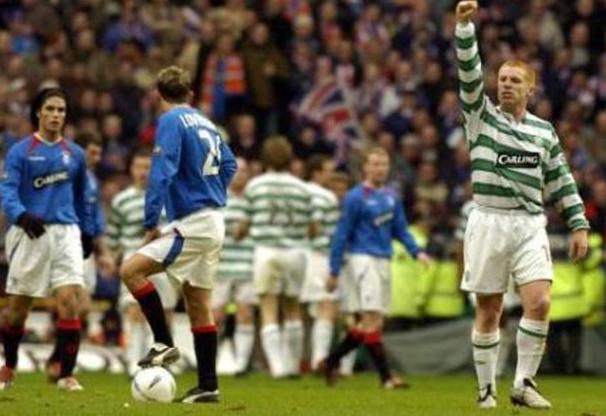 HOOPY DAYS…Neil Lennon salutes the Celtic fans as the Hoops celebrate a 3-0 win over Rangers at Parkhead in January 2004.

“I can see from both sides, Rangers will be unhappy at not being given the chance to catch them.

“I think the majority of players would love to see the season played out.

“Even if you’re Rangers, a few points behind, there are still a couple of Old Firm games and a chance.

“As hard as it sounds and far away as they were, there is still a chance.

“Though, from a Celtic point of view, it would be fair because they’re so far in front.

“It’s through no fault of Celtic’s own that they’ve not been able to finish the season.”

Rae added: “Obviously, there are some fantastic players at Rangers and the squad is amazing and Steven Gerrard is a winner.

“But Celtic have been there and done it. Rangers maybe don’t have enough players who have been in that position, seasoned pros who have won loads of trophies.

“Celtic are more used to it, when times get tough just cracking on.”

Rae, of course, does not have happy memories of Celtic or Parkhead. He made his debut for Alex McLeish’s team in the east end of Glasgow on January 4 2004 only days after his arrival. The Hoops won 3-0 with goals from Stan Petrov, Stan Varga and Alan Thompson to go 11 points clear at the top and Rae limped off after 35 minutes.