THE mellifluous tones of U2’s ‘The Sweetest Thing’ swept soothingly over Celtic Park on November 21 1998.

The sentiments matched the perfect harmonising among the Celtic players only an hour or so earlier during one of the most extraordinarily one-sided Old Firm confrontations in decades.

As the impatient frost on a chilly early evening in the east end of Glasgow began to settle on the field of dreams, the Celtic supporters were in no rush to leave the scene of such a wondrous celebration.

The scoreboard told but a mere fraction of the story: CELTIC 5 RANGERS 1.

Dr Jozef Venglos had been vilified in the days leading up to the confrontation.

Scorn and ridicule had been heaped upon the Head Coach. He had turned to a thirty-three-year-old fellow-Czechoslovakian by the name of Lubomir Moravcik in his efforts to revive Celtic.

Dick Advocaat, across the Clyde, was shelling out millions of pounds on World Cup players and Venglos’ answer was to pay £325,000 to MSV Duisburg for a veteran midfielder, largely unknown on these shores, who had been dumped into the reserves after only five first team appearances for the German outfit.

The week before Rangers arrived at Parkhead, Moravcik had played in a Celtic team that toiled and then toppled to a 2-1 loss against St Johnstone in Perth.

As usual, things were happening off the pitch. A story was leaked insisting club legend Kenny Dalglish and Jim Kerr, lead singer with rock band Simple Minds, were fronting a consortium who wanted to wrest control of the club from Fergus McCann. The identities of the takeover group were unknown, but, in the end, the money didn’t stack up and the matter disappeared without trace.

On the transfer front, Celtic were linked with powerful Swedish international midfielder Johan Mjallby, who was valued at £1.5million by AIK Stockholm. It was also reported Croatia Zagreb had accepted an offer of £3million for striker Mark Viduka, but the deal would be delayed because of red tape as Celtic sought to get the Australian a work permit.

At 3pm on Saturday November 21, the shrill from referee Willie Young’s whistle ushered in the fifth and last Old Firm game of 1998. The move for Mjallby had gathered momentum and he had signed a four-year contract just three days earlier.

Venglos put him straight into the middle of his defence alongside Alan Stubbs who had overcome his injury problems. Marc Rieper, however, was still out.

So, too, was Jonathan Gould and Tony Warner kept his place in goal.

Paul Lambert returned after suspension, but the Head Coach provoked criticism by leaving out Mark Burchill and, even more unlikely, replacing him with Lubomir Moravcik as Henrik Larsson’s frontline partner.

The spluttering of indignation and the questioning of Venglos’ ability were muzzled amid tumultuous applause in the twelfth minute.

Moravcik had just scored his first goal for Celtic and, in a heartbeat, had wiped away any doubts surrounding his qualities. 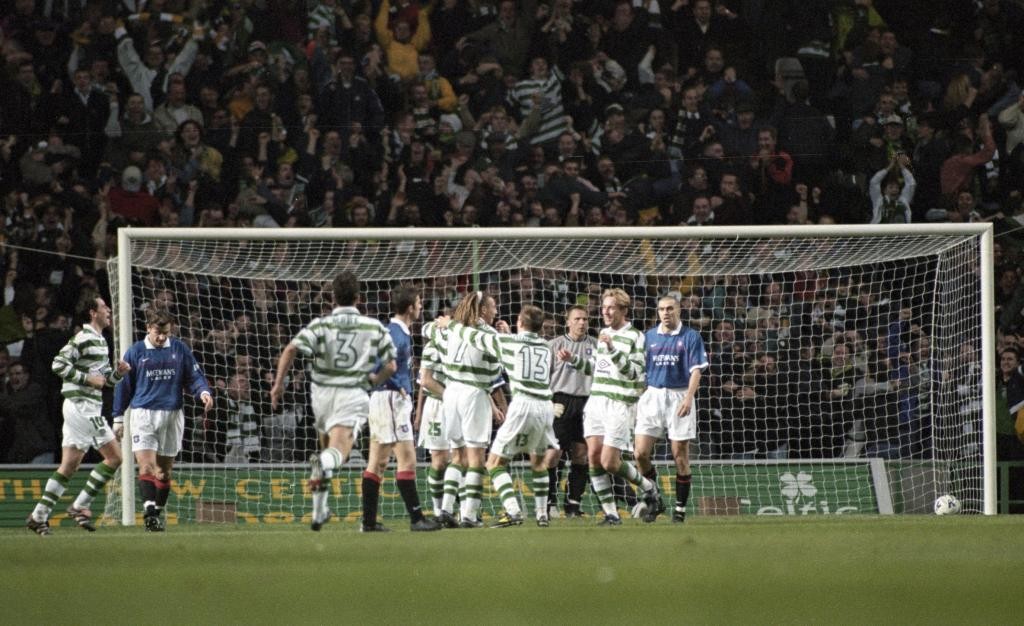 Stubbs took the ball off Rod Wallace deep in his own penalty area and strode forward with purpose. He pushed a pass to Phil O’Donnell on the left who transferred it swiftly into the tracks of Simon Donnelly, speeding away from right-back Sergio Porrini. He cut a crisp low ball across and Larsson wrong-footed Colin Hendry with a neat step-over.

Moravcik, two yards outside the penalty box, pounced on the opportunity with an exquisite first-time left-foot drive and goalkeeper Antti Niemi hadn’t a chance as the ball nestled low to his left hand corner of the net. The wily little midfield mastermind stood back as if admiring his handiwork.

He admitted later, ‘I didn’t know what to do. I didn’t know how to celebrate. The stadium was bouncing and I just looked around me. Then my team-mates arrived.’ 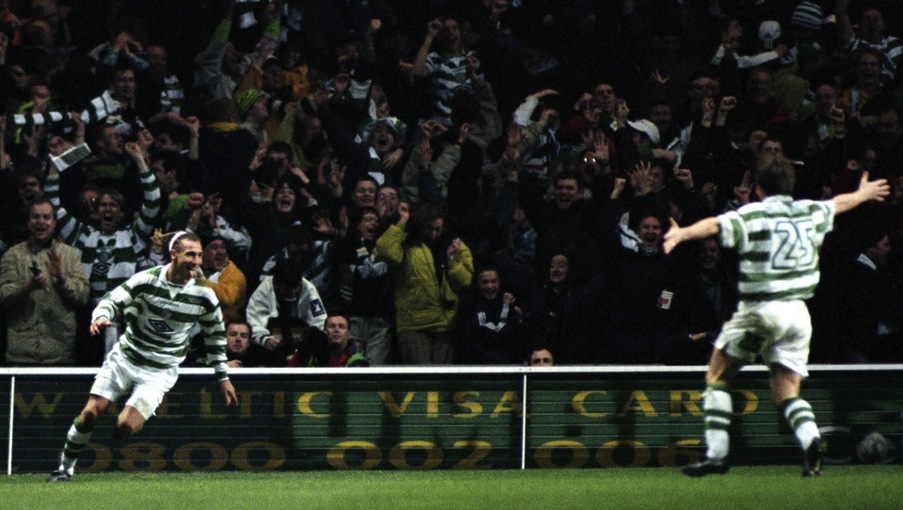 Not everyone admired Moravcik’s grace of movement. Scott Wilson, Rangers’ central defensive enforcer, left his beat and followed the Czech ten yards into Celtic’s half before launching a high and reckless challenge on his opponent. There is the train of thought that a perpetrator of such violence might escape the harshest of punishments for such a foolhardly tackle if it is done far enough away from his team’s own danger zone where it cannot be deemed a goal-denying foul.

Willie Young was having none of it. The referee immediately went to the pocket where he kept his red card and the game was over for Wilson in the twenty-second minute.

If Wilson, less than gifted in the fine arts of the sport, thought Moravcik would be intimidated for the remaining sixty-eight minutes by his act of thuggery, he got it badly wrong. 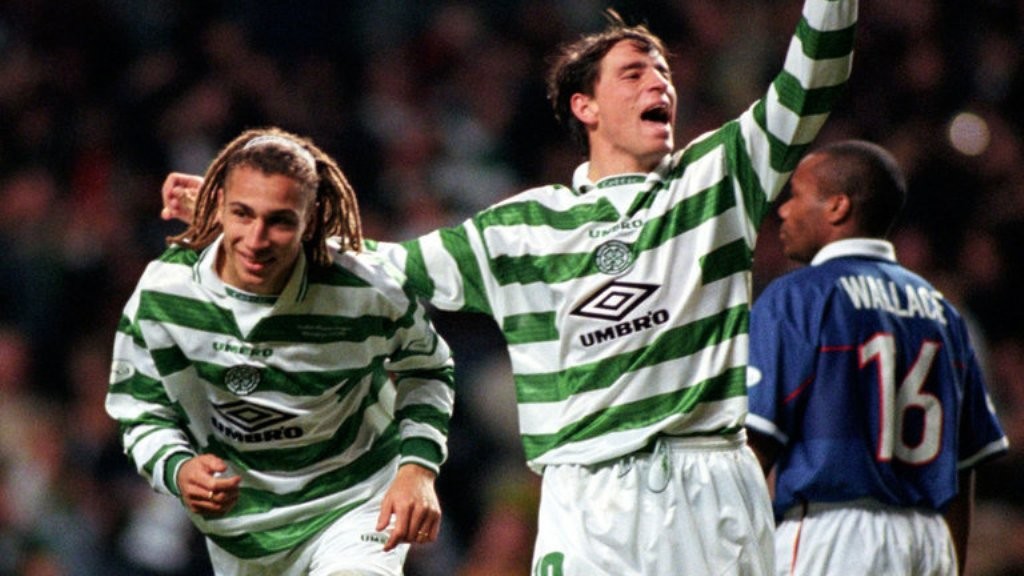 Four minutes after the turnaround, a motionless Niemi was beaten for a second time and once more the ball was tucked safely behind him by Venglos’ protege. Tommy Boyd joined the attack as he rampaged up the right wing and he picked out Moravcik, standing in isolation in the penalty area. With a leap, an arched back and a swift forward thrust of the side of his head, the Czech made impeccable contact and his effort whooshed in at the corner. Again, Moravcik showed he hadn’t rehearsed a goal celebration in advance as he stood rooted to the spot, looking around in almost childlike wonderment.

Donnelly slipped a pass in front of Larsson who accepted it on the run, dashed past Hendry and deftly flicked the ball over the outrushing Niemi. Sixty seconds after that, Giovanni van Bronkhorst pulled one back with a twenty-five yard free-kick that struck the inside of Warner’s right-hand post before finding the net.

The whirlwind of goals continued as Larsson got a fourth. Phil O’Donnell whisked over a delightful left-wing cross and Larsson rose with immaculate timing to bullet in a header. Niemi, once again, didn’t have time to move a muscle.

Astutely, with the points in the bag, Venglos afforded Moravcik the opportunity of a standing ovation when he took him off with eight minutes to play. 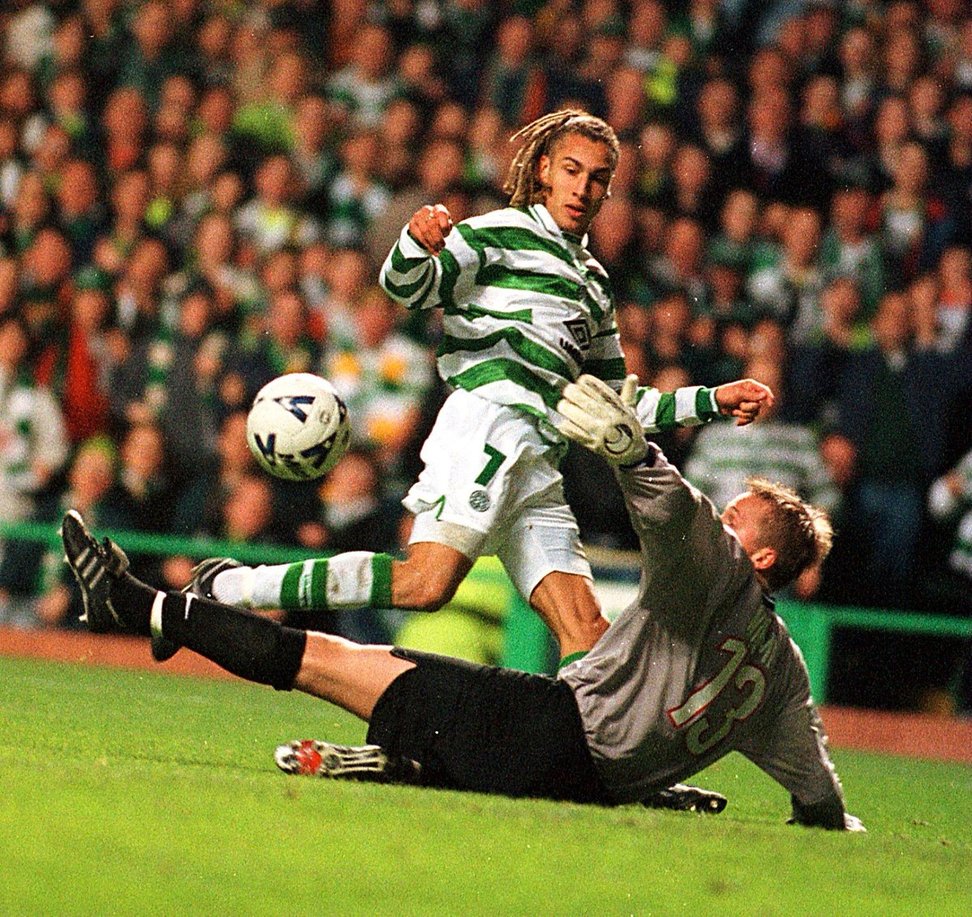 Celtic supporters rose as one to the hitherto ‘unknown’ midfielder who couldn’t get a game for a second-rate German team. In time, it emerged he had fallen out with the coach and his punishment was to be banished to the second string.

On came Burchill and he joined in the frolics with the fifth goal in the last minute. Larsson set him up with a clever ball inside the struggling Porrini and the youngster took it first time to fire it beyond the flapping Niemi.

Dick Advocaat had let everyone know Rangers would have had a thirteen-point advantage over Celtic if his side had won this game, the fifteenth of the league season. If he was trying to out-psyche his opposite number, it failed miserably.

The old sage didn’t bite. It was the Ibrox team’s biggest defeat at Parkhead for thirty-two years when Stevie Chalmers struck a hat-trick in an identical 5-1 success for Jock Stein’s men on their way to nine in a row. 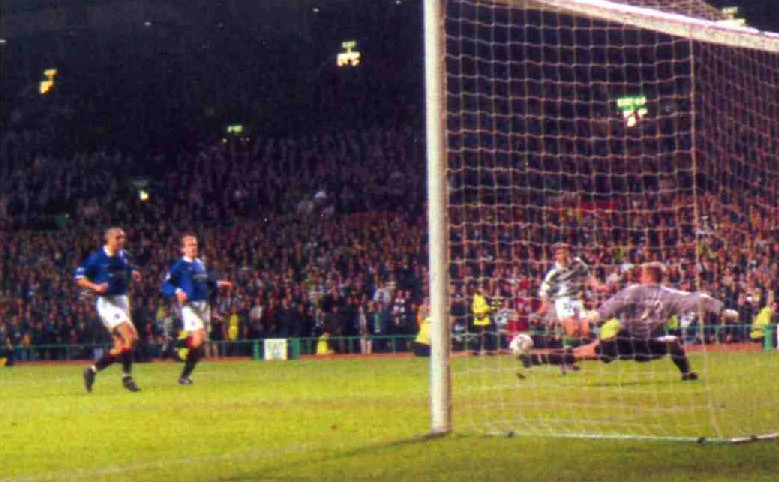 Venglos could afford to smile afterwards. ‘Do you think I do not know the qualities of Moravcik after seventy-three international caps and his games in World Cups and European Championships under me?’ he asked, coming close to chiding the non-believers.

‘He is a very good player with lots of skill and awareness.’

On this occasion, there were no dissenting voices.

He continued, ‘I think we have to be happy with a good performance today. Hopefully, we can build on this result because we have had one or two false starts this season. We played with spirit, passion and determination and we will need that in every game from now on.’

Johan Mjallby, still looking wide-eyed after his first game, admitted, ‘I thought I knew about it all – then the game started. For the first ten minutes, I was shit-scared. I mean it. I didn’t want the ball anywhere near me and when it did come to me I felt my touch was terrible. The noise all around the place was incredible. I’ve never experienced anything like it. After that start, though, I really began to enjoy it. That game will live with me forever.’

Extract from The Winds of Change, published by CQN Books in hardback and available for the reduced price of £10 plus p&p from CQNBookstore.com

The next day Scotland on Sunday reported on this match. Here is their back page. Check out the exclusive story at the right hand side… 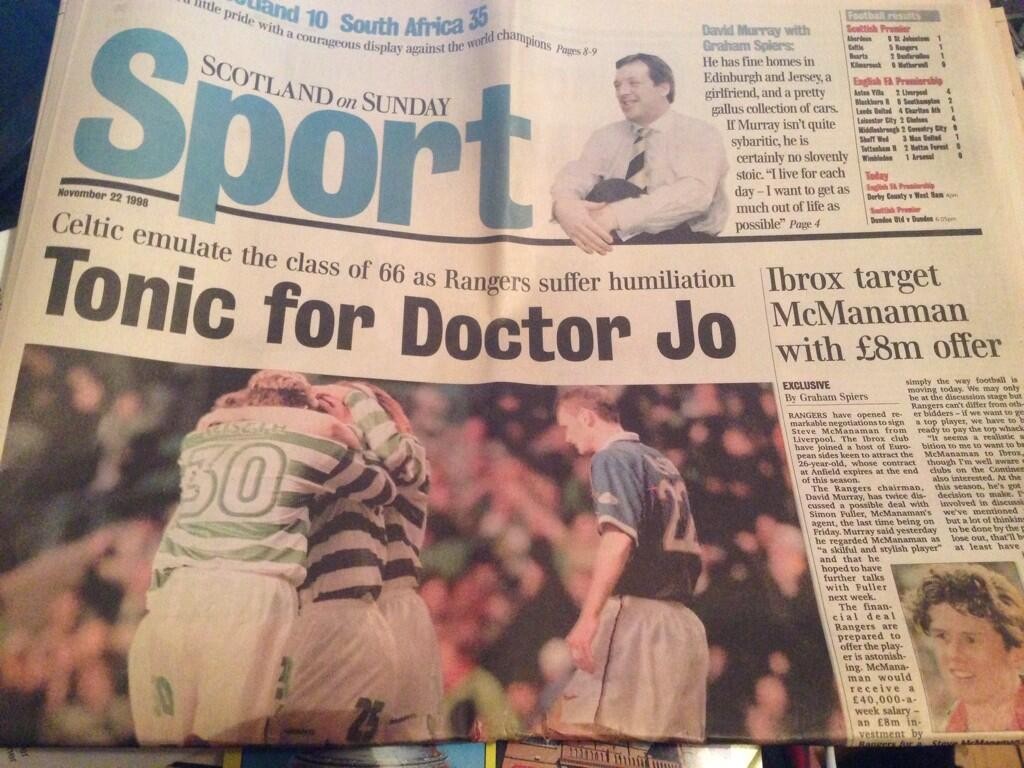 GET BOTH THE WINDS OF CHANGE AND CAESAR & THE ASSASSIN FOR JUST £20 plus p&p at CQNBOOKSTORE.COM