THE last time Costa Rica beat Scotland by a solitary goal it wrecked the nation’s World Cup bid in Italy 1990.

Alex McLeish played for Craig Brown’s team that afternoon and he was on the receiving end again tonight when he returned to take charge of the international side in the friendly at Hampden.

It was a low-key encounter that didn’t ignite until the second-half when McLeish sent on Celtic double-act Stuart Armstrong and Callum McGregor as 58th-minute substitutes for Scott McTominay and Tom Cairney.

They added some attacking oomph to the outlook, but it still wasn’t enough on a disappointing second coming for McLeish.

There was no sign of any Celtic players in the Scots line-up at kick-off, but Cristian Gamboa was in for the visitors in his usual right-flank berth.

Alex McLeish went with an experimental starting side and handed debuts to Scott McKenna, McTominay, Kevin McDonald and Oli McBurnie.

The team found difficulty in getting into their rhythm in the first-half while the much more experienced Costa Rica outfit sat back and controlled a lot of the play.

McBurnie, who has scored six goals in eight games on loan at Barnsley from Swansea since January, looked lively, but lacked support going forward. 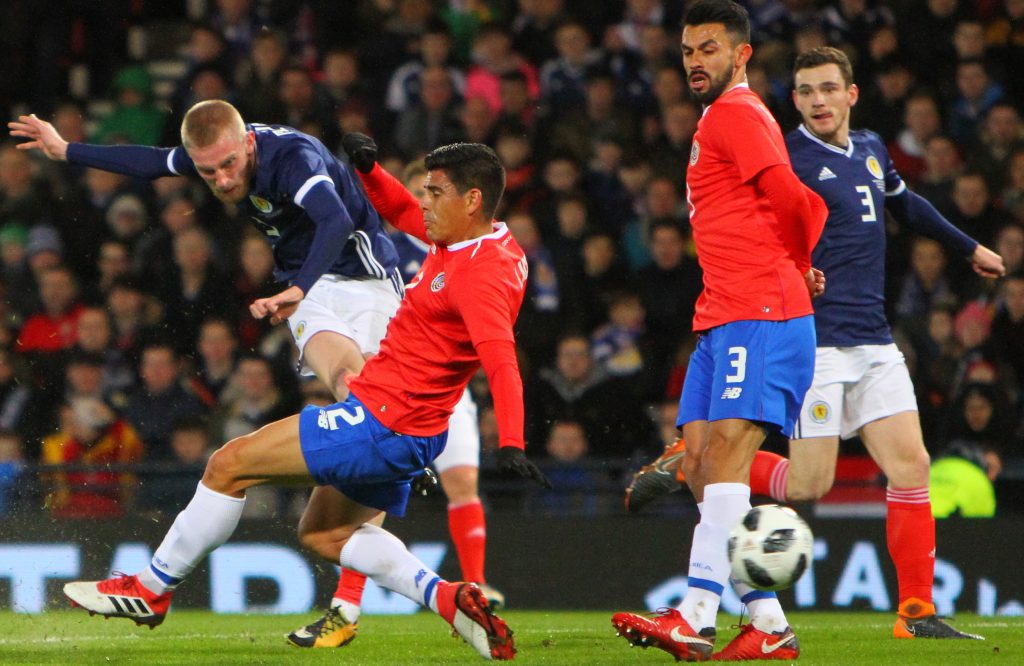 WHAM…Scotland new boy Oli McBurnie slams a shot wide of Celtic’s Costa Rican international        Cristian Gamboa, but the keeper made a fine save.

McTominay, with his Manchester United manager Jose Mourinho watching from the stand, spent most of his first 45 minutes for his adopted country helping out in defence, but he still looked assured and poised when he brought the ball into enemy territory.

Andy Robertson, as ever, looked busy on the left wing while Andy Ritchie toiled to make an impact on the right.

Scotland were undone in the 14th minute when the visitors took the lead with a remarkably simple goal.

They worked the ball neatly up the left, Bryan Oviedo had too much time to look up and pick out Marco Urena and he guided a low shot from 12 yards wide of the stranded Allan McGregor.

The nearest Scotland came to levelling in the first-half came in the 17th minute when Matt Ritchie swung in an inviting right-wing corner-kick. 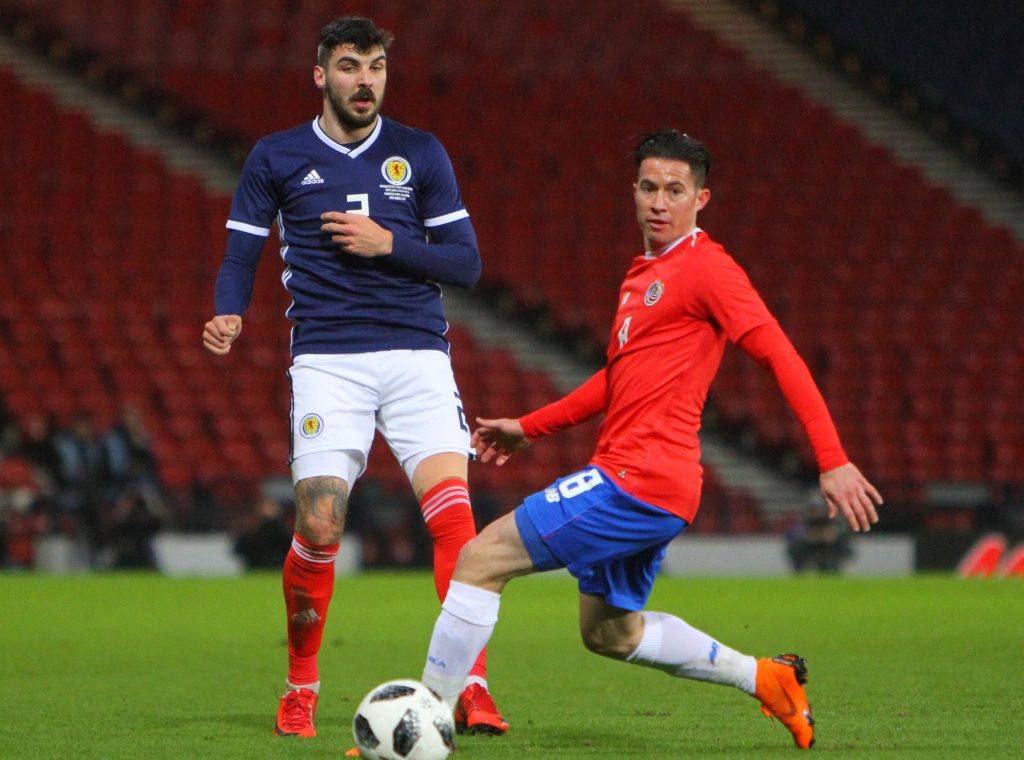 ON THE ATTACK…Callum Paterson menaces the Costa Rica defence.

Callum Paterson raced in to get a free header from six yards, but he failed to hit the target when he should have worked Real Madrid keeper Keylor Navas.

The hard-working McBurnie did bring the experienced No.1 into action when he swept in a low angled right-foot drive that Navas managed to bundle clear to his left.

Scotland stepped it up after the interval and Armstrong and McGregor helped raise the tempo.

McGregor came close to setting up an equaliser for Ritchie in the 65th minute with a perfect pass into the path of the Newcastle winger, but he went for power instead of precision and Navas got his hands to the ball to deflect it for a corner-kick.

McLeish sent on Matt Phillips, John McGinn and Jamie Murphy for McBurnie, Charlie Mulgrew, captaining the side for the first time, and Ritchie as he tried in vain to snatch a draw.

Alas, it was to no avail.

Now all eyes are on Budapest for the friendly with Hungary on Tuesday and possibly the new era for Scotland has just been delayed.