IT was party time in Paradise as the champions unfurled their seventh successive Premiership flag courtesy of club legend Danny McGrain.

And there was wall-to-wall joyous harmony with the fans in fine voice as Brendan Rodgers’ men settled down to put Kenny Miller’s Livingston under the cosh right from the off.

It took only eight minutes for the champions to claim their first league goal of the campaign as they aim for eight-in-a-row.

Jonny Hayes, making a welcome return to the team for the first time this year after his leg-break against Dundee on Boxing Day, was instrumental as he collected the ball on the left wing and hurtled an inviting cross into the penalty area.

Tom Rogic, so adept with the ball at his feet, showed his prowess in the air as he timed his leap to utter perfection and made a solid contact. 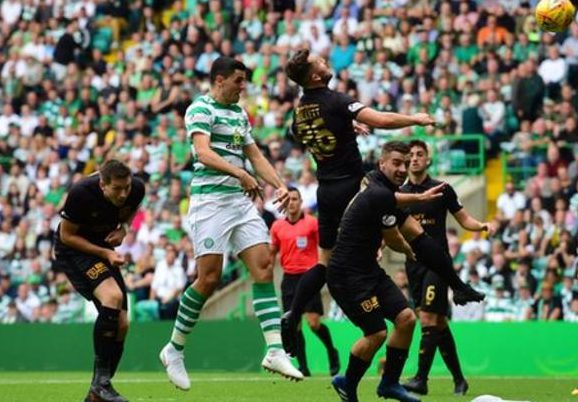 HEADMASTER…Tom Rogic rises to nod in the opener against Livingston.

Odsonne Edouard, the £9million summer capture from Paris Saint-Germain, doubled the Hoops’ advantage in the 26th minute and it was a strike that would have had the manager purring with the simplicity of its execution from start to finish.

It began with a corner-kick from the visitors, but James Forrest got his head to the ball to send it straight to Rogic. The Aussie galloped off at pace as his team-mates swarmed forward in support.

Poor Livi were caught exposed as they tried to get back into position to repel the lightning-swift raid. Rogic knocked it in front of Oliver Ntcham and he slid it across for his compatriot Edouard.

There was only going to be one outcome as the striker tucked it away with some aplomb beyond the helpless Kelly.

No-one could argue the merit of Celtic being two goals ahead. By the time the interval arrived, stats showed the home side had enjoyed a remarkable 75 per cent of the possession.

Rodgers’ players dominated and their ability to keep the ball and move it around at pace was pleasing. Well, to most people at sell-out Parkhead, but the small Lothian contingent had  to suffer in silence.

The Hoops had other opportunities to add to the scoreline in the opening half, but credit to Kelly who made an excellent save from callum McGregor as he raced from his line to snatch the ball off the midfielder’s toe.

The shotstopper did well, too, when a shot from Ntcham appeared to take a wayward bounce in front of him, but he held on to snuff out the opportunity.

There was a special round of applause for Rogic when he demonstrated his incredible close control as four Livi players snapped at his heels. The World Cup man was hauled to the ground to earn a free-kick.

Player/boss Miller, who quit Ibrox at the end of last season, was also the target for much derision when he was booked for a foul on Mikael Lustig.

The game was well and truly over as a contest five minutes after the interval when Celtic were awarded a penalty-kick after McGregor had been sent sprawling in the box.

Keeper Kelly didn’t agree with referee Nick Walsh’s judgement and was booked for his trouble. His mood wasn’t helped when his next action was to retrieve the ball from the back of his net.

On the hour mark, Leigh Griffiths and Kieran Tierney were given a rousing reception as manager Rodgers, with an eye on Wednesday’s Champions League qualifier against AEK Athens, withdrew Edouard and Hayes.

In the 74th minute, Mikey Johnston entered the confrontation as a substitute for Rogic.

Griffiths showed some sublime skill in bringing a ball down, but the moment was ruined by a crude challenge from Jack McMillan who was rightly booked.

There was a hiccup right at the death when Scott Robinson netted with virtually the last touch of the ball after the home defence switched off when danger threatened.

Craig Gordon had every right to be raging with Jozo Simunovic and Co. A repeat of that sort of lapse will be extremely costly against the Greek champions in midweek.