CELTIC have been given the good news Odsonne Edouard is likely to get the green light to face Aberdeen at Pittodrie on Boxing Day and Rangers at Ibrox three days later.

The £10million French striker limped off in the first-half of the 3-0 triumph over Motherwell at Parkhead and there were fears he would be sidelined for the remainder of the year.

Brendan Rodgers would have been left without a recognised striker with Leigh Griffiths also out of the picture due to personal reasons.

Edouard will miss tomorrow’s home encounter against Dundee, but there are now hopes he will be fit to take his place against the Dons on Wednesday.

Teenager Mikey Johnston came on for the club’s record buy against the Fir Park outfit and scored his first senior goal with a memorable effort from the edge of the box that flew into Mark Gillespie’s top left-hand corner of the net.

Rodgers has been in a similar situation in the past when he has been forced to play without a natural hitman. In those cases he has utilised wide players such as Scott Sinclair, James Forrest or former loanee Patrick Roberts. 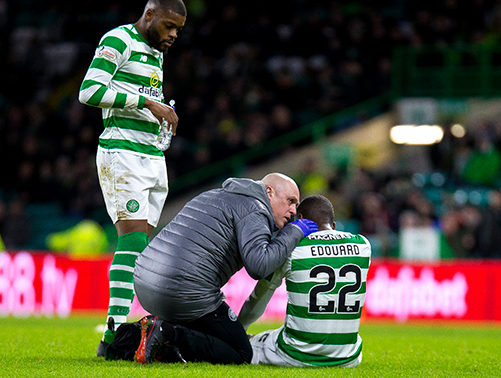 GROUNDED…Odsonne Edouard sits it out before leaving the field against Well. A concerned Olvier Ntcham looks on.