Celtic Quick News on News Now
You are at:Home»Latest News»CELTS TO THE FOUR FOR STRACHAN
By CQN Magazine on 28th September 2016 Latest News

SCOTLAND manager Gordon Strachan has named four Celtic stars in his squad for the World Cup double-header against Lithuania and Slovakia next month.

Goalkeeper Craig Gordon, restored to the Hoops first team for this evening’s crucial Champions League confrontation with Manchester City, left-back Kieran Tierney, bang in form since the start of the season, rejuvenated winger James Forrest and fit-again striker Leigh Griffiths are the Parkhead players to get the nod for the crucial international fixtures.

Former Hoops ace Shaun Maloney has been recalled after his exclusion from the side that defeated Malta 5-1.

Scotland will host Lithuania at Hampden on October 8 before travelling to Slovakia three days later.

Lee Wallace is included in the squad. Both matches will be played on grass.

The full squad is listed below. 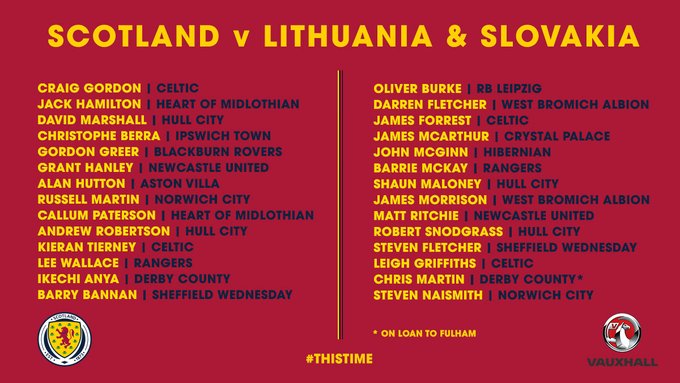