THIS time last year Stuart Armstrong was preparing for the League Cup Final against Motherwell and the opportunity to add to the three medals he had won in Brendan Rodgers’ first season as Celtic manager.

It’s all-change this time around for the midfielder who quit Parkhead in a £7million summer switch to PremierLeague outfit Southampton – a well-worn path which had already been taken by Victor Wanyama, Fraser Forster and Virgil van Dijk in recent seasons.

However, instead of looking to add to his medal collection, Armstrong has become a bit-part player at the St Mary’s club that is fighting relegation, sitting fourth from the bottom with a meagre eight points from 12 games, only three above Fulham anchored at the foot of the table.

Mark Hughes, the boss who shelled out for the Scotland international, is under extreme pressure and has chosen the playmaker sparingly since his arrival.

Armstrong has made only eight appearances in the Premier League and has toiled to make an impact in a struggling line-up.

He said: “As an individual, I wanted something new, a new challenge and if I hadn’t taken that opportunity I would have regretted it. 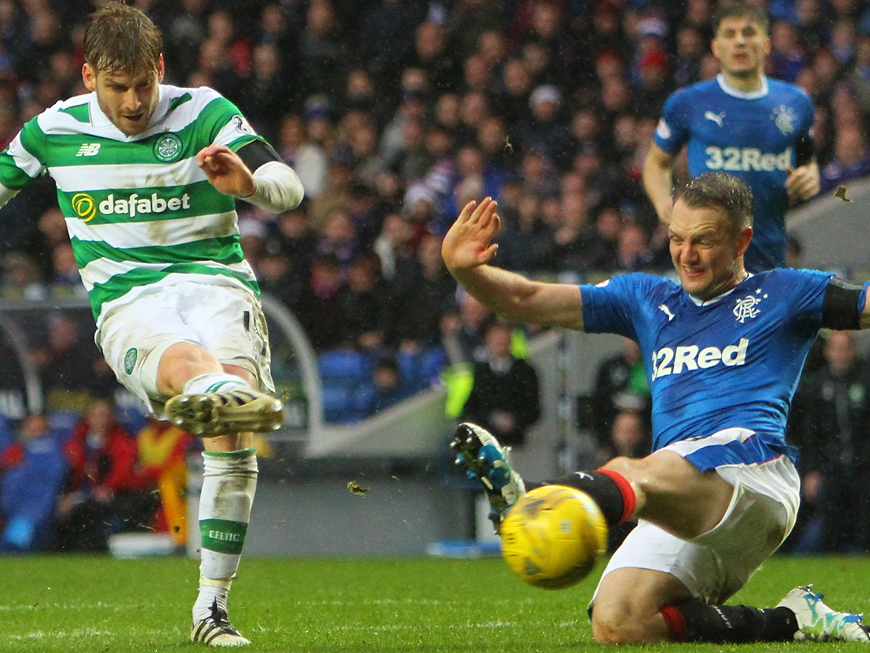 HAPPY HOGMANAY…Stuart Armstrong hammers in a shot as Clint Hill is too late to block the effort in Celtic’s 2-1 win at Ibrox just before the tun of the year in 2016. Pic: Geo.

“I wouldn’t say I miss Scottish football. I had my time there, I was very grateful for it and had a lot of nice memories.

“It’s always hard when you’re not playing games, not starting games especially, because nobody likes sitting on the bench

“I’m not the most patient. I need to learn to adapt. I’m in a different league – I spent eight years in the Scottish league.

“I would say it’s a different type of challenge. If I’d stayed at Celtic and continued to have success I’d view my career when it finished as a very good one and a very successful one.

“I think each individual is different, they’ll have their own desires and want to have their own experiences. I grew up watching a lot of Premier League – it’s something I dreamed about as a young player. That was my own interest and something I’m very happy to be experiencing right now.”

Armstrong was heading into the last year of his contract when he was allowed to move on. Olivier Ntcham, bought for £4.5million from Manchester City at the start of last season, had already taken his first team place in the run-in to historic double treble campaign.

The French ace, who agreed a new four-year deal last week, is now ready to play his part in the quest for a third successive clean sweep.

Armstrong, though, knows he will face a battle in the Southampton side that has been under strain from day one.