We are publishing tributes to the Celtic great who scored the most heralded and feted goal in the club’s history, the European Cup winner against Inter Milan in Lisbon on May 25 1967.

STEVIE CHALMERS gave Rangers centre-half Ronnie McKinnon one of the most uncomfortable games of his career at Parkhead on January 3, 1966.

It was a vitally important encounter with the Hoops attempting to win their first championship since 1954 when manager Jock Stein had been centre-half in the team.

There weren’t even two minutes played on a cold, frosty afternoon in the east end of Glasgow before Ronnie Simpson was picking the ball from the back of his net. A shot from John Greig was blocked and spun to Davie Wilson, playing on the right for a change.

The Scotland international latched onto the rebound and drove an angled effort beyond the diving Hoops keeper and into the far corner. The travelling fans yelled in delight and they were still celebrating at half-time when there was no change to the scoreline.

Things changed fairly dramatically in the second period. John Hughes ran amok on the left wing and Chalmers was equally unstoppable marauding through the centre. McKinnon and his Ibrox colleagues were put to the sword.

HOOPY NEW YEAR…Stevie Chalmers (NO.10) scores one of his hat-trick in the 5-1 win win over Rangers in January 1966. 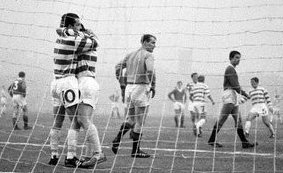 IN THE NET…Stevie Chalmers is congratulated by Bobby Murdoch after scoring. Not so happy are Gers keeper Billy Ritchie and centre-half Ronnie McKinnon.

Chalmers walloped a hat-trick beyond Billy Ritchie and Bobby Murdoch and Charlie Gallagher added to the occasion by thundering two long-range efforts into the net. Celtic went to the top of the old First Division and remained in pole position for the remainder of the campaign.

McKinnon, 81, who was a Scotland international team-mate of the all-action striker, recalled: “Stevie Chalmers was a proper footballer.

“He was an honest player, there were no dirty tactics and you knew what you were playing against.

“I played alongside Stevie for the Scots and the game that stands out, of course, was Brazil when he scored in that 1-1 draw in 1966. Pele was the name on everyone’s lips around that time, but Stevie didn’t look out of place in that type of company.

“But it’s funny because I remember Pele coming up to me in that game and pointing to Billy Bremner and asking me to speak to him because Billy was giving him a hard time. but I said: ‘Any other player but him!’.

“Stevie was a very clever player, a 100 per cent player, who was always in the right area to score goals, but could also make goals. He was always sniffing around for a goal and you had to watch him all the time.

“If you let him out of your sight, he’d end up scoring.”