RYAN CHRISTIE, stretchered off in Celtic’s 2-1 Europa League defeat from RB Salzburg, is poised to return against Dundee this afternoon.

The elegant midfielder sustained an ankle injury against the Austrians and was forced to miss the 2-0 loss at Hibs last weekend and the 3-0 midweek triumph over Motherwell.

Christie, who has been in sensational form since replacing Olivier Ntcham at half-time in the Betfred League Cup semi-final victory over Hearts at Murrayfield in October, is eager to get back into the thick of the action.

Rodgers said: “Ryan is available and back in the squad.

“He is very keen to get back as quick as he can, but we have to ensure that he is not pushing it too much, as well.

“However, he has trained now for a few days and looked really good.”

The champions returned to the top of the Premiership on Wednesday following their win over the Fir Park outfit. 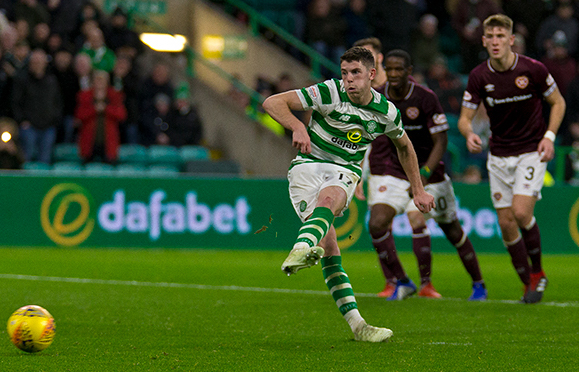 However, it came at a price with Odsonne Edouard limping off with a groin problem in the first-half.

The £10million French ace is the only recognised Hoops striker with Leigh Griffiths sidelined due to personal issues.

Edouard is out of today’s Premiership encounter, but is likely to return for the trip to face Aberdeen at Pittodrie on Boxing Day and Ibrox three days later.

Defiant Dens Park gaffer Jim McIntyre, whose side have conceded eight goals in their last two games and are anchored to the foot of the table, said: “I’ve been to Celtic Park several times with my Ross County team and picked up points, so it can be done.

“You’ve got to go into every game believing you can get a result. We know that we need to have one to 11 right bang at it and we need a few of Celtic’s players to dip below their normal levels.”

Left-back Calvin Miller, on loan from the Hoops, will miss out against his parent club.