RAGING Neil Lennon insists the SFA should admit they have made a colossal blunder over their ban on Ryan Christie.

And the Hoops boss believes there will be an avalanche of suspensions in the game based on the decision to sideline the Scotland international playmaker for violent conduct.

Lennon has been left astounded by the three-game punishment for Christie following the incident with Alfredo Morelos in last month’s Premiership meeting with Steven Gerrard’s Ibrox side.

He insisted there was no case to answer after the second-half clash between the players..

Lennon, speaking to the Daily Record, said: “I would like to see common sense prevail. I’d like them to say, sorry, we made a mistake.

“If that’s the case, then there are going to be a lot of bans handed out. A lot of players are going to get cited.

“From the club’s point of view, we are extremely disappointed and bewildered by the outcome.

“How they find that to be an aggressive act or an act of brutality, as they put it, is baffling to me.

“I just don’t see how you can come to that conclusion. It’s so inconsistent.

“There are three ex-referees on the committee. I’ve been to these things before and I’ve come out scratching my head, so there are consistent in that aspect.

“Honestly, we’ve been talking about this for years. There is so much confusion, but we have seen incidents that are a lot worse than that go unpunished.

“There really wasn’t much to it, yet he has been cited for it and found guilty of how they describe it.

“But it’s absolutely bizarre from our point of view and very frustrating.” 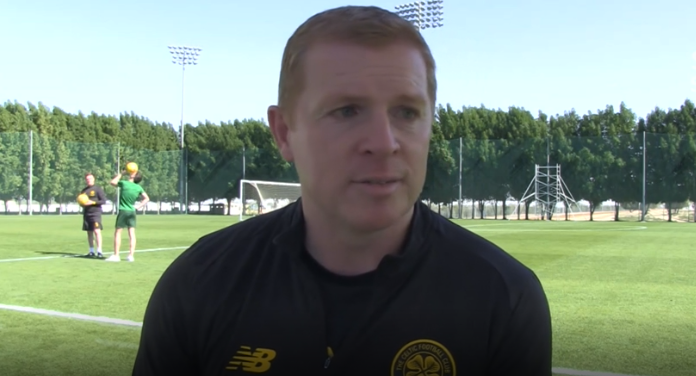 Lennon continued: “It’s nothing. We’ve looked at it time and time again and, if anything, it’s accidental.

“Listen, we could show you umpteen other incidents far worse than that that have gone unpunished. We don’t understand it and are very angry about it.

“I’ve seen worse that either go uncited or go unpunished even when they have been cited. We are angry about it. The club will speak to the SFA, though I don’t know if they will get any clarification on it or not.

“But from our point of view we are bitterly disappointed with the outcome.”

The Irishman admitted the higher profile of a Glasgow derby may have had an influence on the decision, but commented: “But it’s still just a game. And the rules have to be the same.

“They can’t be right for this game and not right for another game. I couldn’t believe it.

“People say Ryan will be injured, anyway, but that’s not the point. There is a principle here and I am bewildered that something as innocuous as that can result in a three-game ban.

“One, Ryan is not that type of player. Two, it didn’t look like he made a deliberate attempt to do anything. If you had played the game and had any common sense about you then you would know that.”

Lennon also confirmed Christie will take part in no training in Dubai after undergoing an emergency operation only hours after the game in which he also missed a first-half penalty-kick and was replaced 11 minutes from the end.

He added: “Well, he’s recovering from groin surgery. He may miss the first week of the restart, but we hope he will be back for the second. He can’t do anything out here.”