That’s the verdict of former Scotland international boss Craig Brown who saw both players up close during their loan stints at Aberdeen in his role on the Pittodrie board.

The Celtic playmaker is due to face Russia at hampden this evening while the much-vaunted Leicester City operator is likely to play for England against Bulgaria at Wembley tomorrow night.

Brown revealed he is a bigger fan of the Highlander than of Brendan Rodgers’ player.

The veteran ex-gaffer, speaking to The Sun, insisted: “Ryan has been outstanding at Celtic. At Aberdeen, we had Ryan on loan and we also had James Maddison on a temporary deal. 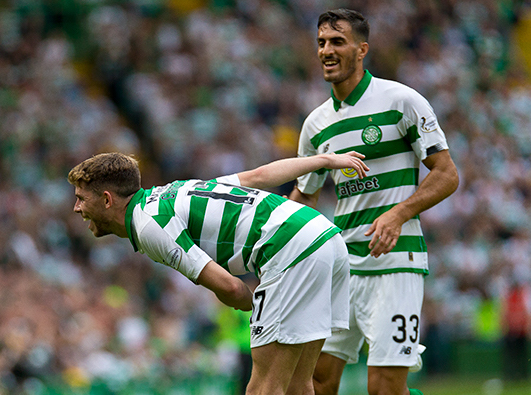 TAKE A BOW, MY BHOY…Ryan Christie, watched by Hatem Abd Elhamed, celebrates a goal in the 7-0 romp against St Johnstone.

“Maddison went for around £20million to Leicester City from Norwich Citry and now he’s in the England squad.

“But when Ryan was at Aberdeen, my feeling was that he was the better of the two players.

“The performances he gave us at Aberdeen were excellent. It was a good bit of initiative by Derek McInnes to get him to the club on loan and he did a wonderful job for us.

“So, it’s no surprise how well he’s doing at Celtic now. Ryan can be a big help for Scotland and can become a key player.”

Christie had an 18-month stint at the Dons and boss McInnes fancied making the move permanent, but the 24-year-old hit a fabulous run of form with the champions after a spectacular second-half appearance in the 3-0 Betfred League Cup semi-final triumph over Hearts at Murrayfield.

Ironically it was Rodgers who offered him a new deal the following month to keep him at Parkhead for another three years, at least.