CELTIC have held fresh contract talks with Ryan Christie who will be a free agent in January.

The 26-year-old Scotland international midfielder is free to talk to interested clubs during the current transfer window which closes three weeks tomorrow.

Ange Postecoglou is keen to keep Christie who, according to some suggestions is open to to remaining at Parkhead, as reported in the Scottish Sun. 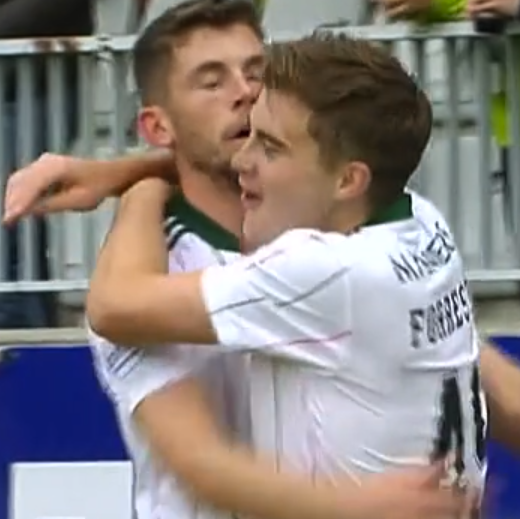 MAY THE FOURTH BE WITH YOU…Ryan Christie and James Forrest celebrate the midfielder’s diving header to make it 4-2 against Jablonec.

Crystal Palace, on the look-out for middle-of-the-park reinforcements after losing James McCarthy to the Hoops at the end of his terms, Burnley and Nice have also been linked with the Highlander who was a stand-out as the team thrashed Dundee 6-0 in Glasgow yesterday.

Christie also looked lively during his 25-minutes against Jablonec in the Europa League qualifier in the Czech Republic last week and scored with a fine diving header for the fourth goal in the 4-2 victory.

The elegant playmaker, who had two loan spells at Aberdeen after joining from Invenerness Caley Thistle in 2015, has made almost 150 appearances for the Hoops.

DRIVING FORCE…Ryan Christie races down the left before setting up Kyogo Furuhashi’s second goal against Dundee,

Apparently, Christie is enjoying working with the new boss and could be persuaded to pen an extension.

Postecoglou praised Christie for his role in the demolition of the Dens Park club and said: “Ryan was great, his energy is infectious.

“It goes through the whole team. He loves getting on the ball, but it’s hard to single people out because the whole team worked really hard and there wasn’t one player who wasn’t trying to do the things we are trying to implement.”