Celtic Quick News on News Now
You are at:Home»Latest News»CHRISTIE IN ‘GOING AWAY TO JAIL’ CLAIM
By CQN Magazine on 16th February 2020 Latest News

RYAN CHRISTIE has opened up for the first time about being cite by the SFA following the Alfredo Morelos incident revealed he felt like he was “going away to jail”.

The Celtic playmaker actually thought a friend was playing a practical joke when he sent a screen shot of the story stating compliance officer Clare Whyte was taking action for the coming together of the players at Parkhead on December 29.

Referee Kevin Clancy was content with awarding Steven Gerrard’s side a free-kick and there was little fuss made at the time.

However, the judicial panel hearing at Hampden last month, which Christie attended via video link from the champions’ training camp in Dubai, proved to be no joke.

The Scotland international, speaking to the Evening Times, admitted: “It was very strange.

“I’ve heard guys talking about going into these things before to fight decisions, but it was never something I had been part of. It was so serious, it felt like I was in a proper court case, like I was going away to jail.”

Astoundingly, Christie was found guilty of violent conduct for grabbing at the nether regions of the Colombian striker who was later red-carded for a shameful dive following his second booking of the encounter which the champions lost at home for the first time in nine years to their Glasgow rivals.

The midfield ace received a two-match ban which was topped up to three when his earlier dismissal against Livingston was taken into consideration. 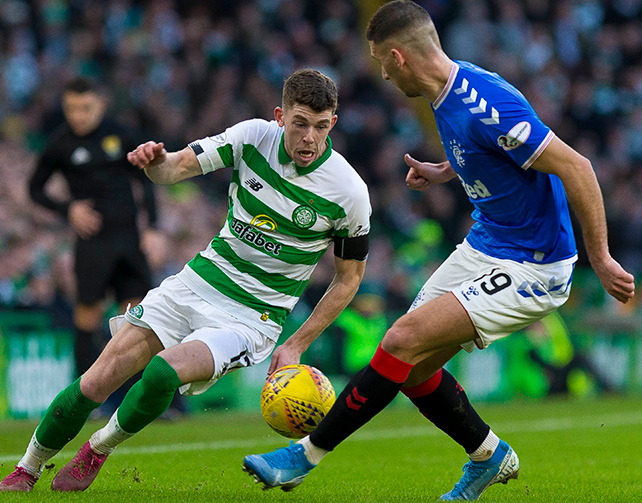 ON THE BALL…Ryan Christie takes on centre-back Nicola Katic.

Christie commented: “When I first heard about it I thought it was a wind-up. I couldn’t even remember the incident. I said that to the panel during the hearing. I didn’t even realise where I had grabbed at the time.

“As soon as the game was done, it wasn’t even a thought. Maybe 10 seconds after that tackle it was out of my head. It wasn’t until I watched the footage back that I even realised my hand had gone there.

“He (Morelos) took the ball past me. It was an obviously a foul, but as soon as a player goes past you, your first reaction is to try to get your body, or something, between them and the ball. It just so happened my hand went there. It was all very strange when I got called back up. I didn’t believe it at first.

“Obviously, it was pretty bizarre to me. I’ve had plenty of people from across the football map get in touch and express their feelings about it, as well.”

Christie, in fact, had to come off before the end of the game and underwent emergency surgery only hours later.

He explained: “It was a wee groin thing. I just felt the pain, saw the doc and he told me we had to go to the hospital straight away. It was all a bit panicky. I was gutted with the way the game had gone, anyway, so the last thing I needed was being rushed to the hospital and going straight under the knife.

“I had to go straight in after the match and get an operation. It was quite handy how quickly we got it done, because we got the winter break and the trip to Dubai to let it heal without any games. I’m not saying the suspension was a good thing, but it meant I couldn’t play in those games, anyway, so, technically, I didn’t miss out on much.

“It’s nice to be back after the break, the injury and obviously the suspension. I couldn’t do anything in Dubai with the injury which was a bit frustrating, but I’m finally back and ready to kick on.”