NEIL LENNON has praised Ryan Christie as his midfield maverick.

The Celtic boss was delighted with the display of the comeback Bhoy who made his first competitive appearance at Parkhead since April 6.

The influential playmaker’s season came to an abrupt end the following week when he suffered multiple facial wounds after a brutal assault from Aberdeen defender Dom Ball in the Hoops’ 3-0 Scottish Cup semi-final win on their way to the phenomenal treble treble.

Christie fitted in as though he had never been away and scored the opening goal in the 2-1 Champions League qualifying win against FK Sarajevo on the team’s way to a 5-2 aggregate triumph.

Lennon applauded the Scotland international’s performance and, speaking to the Daily Record, said: “Ryan is pivotal. I think he made a great impact last year and that’s given him a huge shot in the arm. 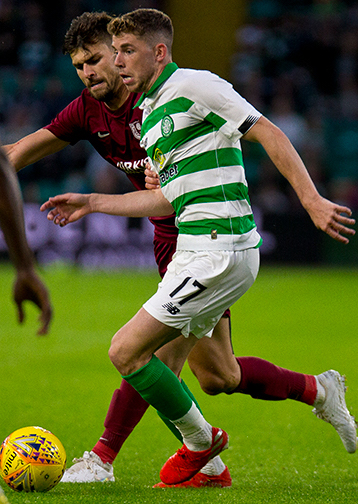 ON THE RUN…Ryan Christie puts the pressure on the Bosnians.

“You could see, even so early in these two legs, he’s been outstanding. He has that bit of the maverick about him that he can make things happen in tight areas.

“Obviously, he scored a wonderful goal against Sarajevo. One minute he’s off balance, the next he’s sticking it in, beautifully curling it around the goalkeeper. I’m delighted with him. His fitness levels are incredible.

“His work-rate is fantastic. He gives a lot up for the team. He has energy and enthusiasm and quality, he’s a brilliant kid to work with as are McGregor and Scott Brown.

Christie, McGregor and Brown will be in action again on Wednesday as the Hoops take on the surprise packets of Estonia, Nomme Lalju, at the second hurdle of the Champions League qualifying. Should be another illuminating evening in the east end of Glasgow.