RYAN CHRISTIE has revealed he has been fined twenty quid by skipper Scott Brown – for being a slow coach.

The elegant playmaker may be flying with 16 goals – four in his last three games – but, as far as the Hoops’ onfield leader is concerned, he is not up to speed.

However, he was eclipsed by keeper Fraser Foster who raced the length of the pitch to get involved with the pyramid of joy behind the goal. The towering shotstopper sped past right-back Mortiz Bauer on his way to congratulate his captain on the strike that eased the eight-in-a-row champions two points clear at the Premiership pinnacle. 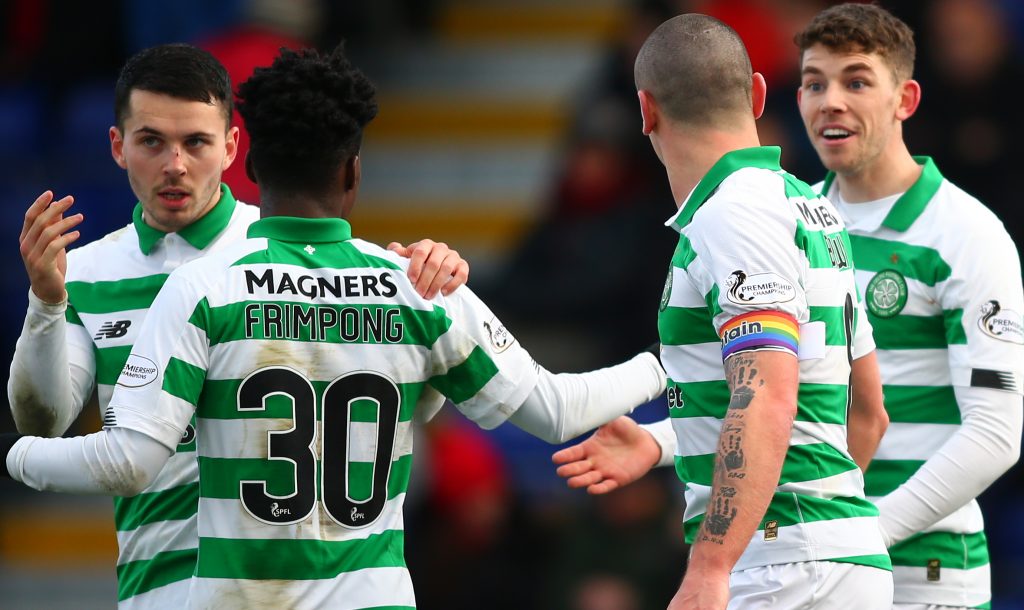 The Englishman’s breathtaking burst from his own penalty box saw him max out his GPS tracker at an amazing 30.5 miles-per-hour.

Christie, speaking to the Sunday Mail, admitted: “My top speed the whole night apparently was 30mph – and because Fraz hit 30.5, I got fined!

“Broony issued the fine, although I actually think he was slower than the pair of us. It goes into the Christmas fund.

“The ball was barely in the net and Fraser was in my face! I was like: ‘How did he get there?’’”

The Scotland international believes Forster’s sprint highlighted the harmony among the players as they prepare for a fourth successive domestic sliverware clean sweep during their record-breaking and unprecedented domination of Scottish soccer.

THE WINNER…Scott Brown hits the goal against Hamilton Accies in midweek – a strike that cost Ryan Christie £20.

Neil Lennon’s men have clocked up THIRTY successive wins in knock-out competitions as they have conquered all before them to win three Scottish Cups and three Betfred League Cups in succession and have the opportunity of assing another against Steven Gerrard’s Ibrox outfit at Hampden this afternoon.

Twenty-four-year-old Christie commented: “We don’t think about it at all. That the run is the last thing in my head.

“It just comes as another game and obviously in the Cup there’s the extra incentive that if you lose, you’re out – so you’re desperate to win even more.

“We don’t feel any pressure of: ‘When is it going to come to an end?’ Speaking to a few of the boys from the Invincibles season – I didn’t play – they said the same thing.

“Everyone kept saying they had to lose at some point and they just won one game at a time until the end.”

HIGH AND MIGHTY…Fraser Forster rises above team-mate Olivier Ntcham to punch away a cross against Hamilton on Wednesday.

Christie scored the winning goal in a 1-0 triumph over Aberdeen in the competition’s showdown a year ago – Brendan Rodgers’ seventh and final trophy at the club – and is looking forward to the clash with their Glasgow neighbours.

He added: “We knew the build-up would be massive, but we’ve been in plenty Cup Finals over the years, so we’re ready to step up to the challenge.

“And our knowledge of Hampden certainly won’t be a hindrance to us. It’s a big pitch, too, that definitely suits our style of play.

“Rangers are a good team.We know that, we can see that by how well they’re doing domestically and in Europe, same as us.

“We are up to the challenge of facing good teams, though. These are the type of games you want to test yourself in. Everyone is always striving to get more success.

“It won’t be for a few more years, maybe when you’ve retired, that you look back on this era and realise just how successful the last few years have been.”

* DON’T miss the unbeatable match reports and the best action images from Hampden this afternoon – only in your champion CQN.