CELTIC midfielder Ryan Christie admitted he was a nervous wreck when he played in a League Cup Final four years ago.

The Scotland international playmaker was only 18 years old when he was told he would be included in the Inverness Caley Thistle squad to face Aberdeen at Parkhead.

Christie was on a loser on that occasion as the Highlanders toppled 4-2 on penalty-kicks following a goalless draw after extra-time.

The then-teenager came on as a substitute for Richie Foran in 100 minutes, but was not required to take a spot-kick in the shoot-out.

Christie, who is likely to play against the Pittodrie outfit in the Betfred League Cup Final at Hampden tomorrow, recalled: “I was still very young and trying to break my way into the first team. John Hughes was in charge and had put me in for a few games before that.

“I remember he read the squad out. I travelled with the team and thought I was just there for the experience as a hamper boy.

GOAL-DEN BHOY…Ryan Christie celebrates with his team-mates after his opener against Hamilton Accies last week.

“Then he said I was on the bench and I was sh***** myself at the thought of that alone.

“Obviously, it was a bit of a dead game which went into extra-time. He sent me to warm up and then I just completely started panicking. I got on and then there was the disappointment of penalties. I didn’t take one – I think I was behind the keeper in the queue.

“Looking back, it was probably my first real taste of a huge atmosphere and being part of it. I was thrown in at the deep end, but enjoyed it.

“Obviously, a lot of boys were gutted after it whereas I was still in awe of the occasion. I didn’t really understand the full disappointment of it.

“But it made it so nice to then go on and win the Scottish Cup. It put things right. I won’t be as bad as 2014 this time around, I’m sure.

“You always have that edge for a Cup Final day. There are another 30 people messaging you and it’s great to be part of that buzz and that day. The most important thing is to win the trophy.

“I hadn’t even thought about this being the chance for me to complete a set of medals. That would be nice.

“When I signed the new Celtic contract the club told me that’s a big factor – it’s a great club to win trophies.

“That’s what you want to do as a professional footballer and we have great opportunities to do that at Celtic.” 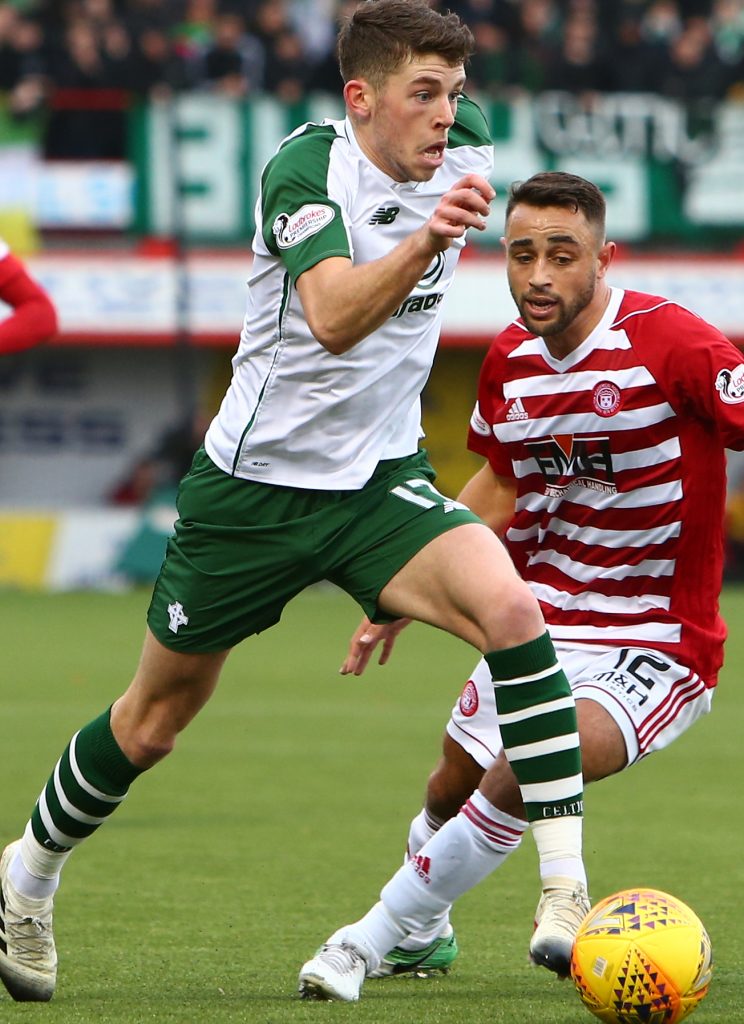 ON THE BALL…Ryan Christie strides forward as he piles the pressure on Accies. Pics: Geo.

Christie, who agreed a three-year extension at the champions last month, helped the Dons to two Cup Finals during his 18-month loan deal with Derek McInnes’ side, but could not face his parent club.

He added: “It actually feels good that it has worked out this way, playing Aberdeen in a Final.

“It will also be strange because I made a lot of pals up there and they are a great bunch of boys. I loved my time at Aberdeen, the relationship I had with all the staff.

“It paid off on the pitch in terms of how I played.”

Now Christie is set to cap a remarkably swift journey from being a bit-part player to key performer at the national stadium as the Hoops bid for their SEVENTH successive piece of domestic silverware since Brendan Rodgers arrived as successor to Ronny Deila in May 2016.