EIGHTEEN down and two to go. That’s the aim of Ryan Christie with three games still to play before the winter break.

The Celtic midfielder notched his 18th goal of the season with the opening strike in the 2-0 win over Hearts at rain-lashed Tynecastle last night.

And the Scotland international playmaker has targeted 20 with Aberdeen on Saturday, St Mirren on Boxing Day and Steven Gerrard’s Ibrox side on December 29 in his line of sights.

Christie swept home in the 28th minute with an elegant finish from the edge of the box that left keeper Joel Pereira helpless and Olivier Ntcham doubled the advantage when he thundered in another before the interval.

The player wouldn’t be drawn on the overall target he set himself in the summer, but told the Daily Record: “I’m happy to score again, but it started with me tackling James Forrest and he was not too happy about that!

“I’ve not seen it back, so I don’t know if it went through the defender’s legs.

“It’s my job as an attacking player to score and create goals, especially playing in this team with the players I have around me and the football we are playing. 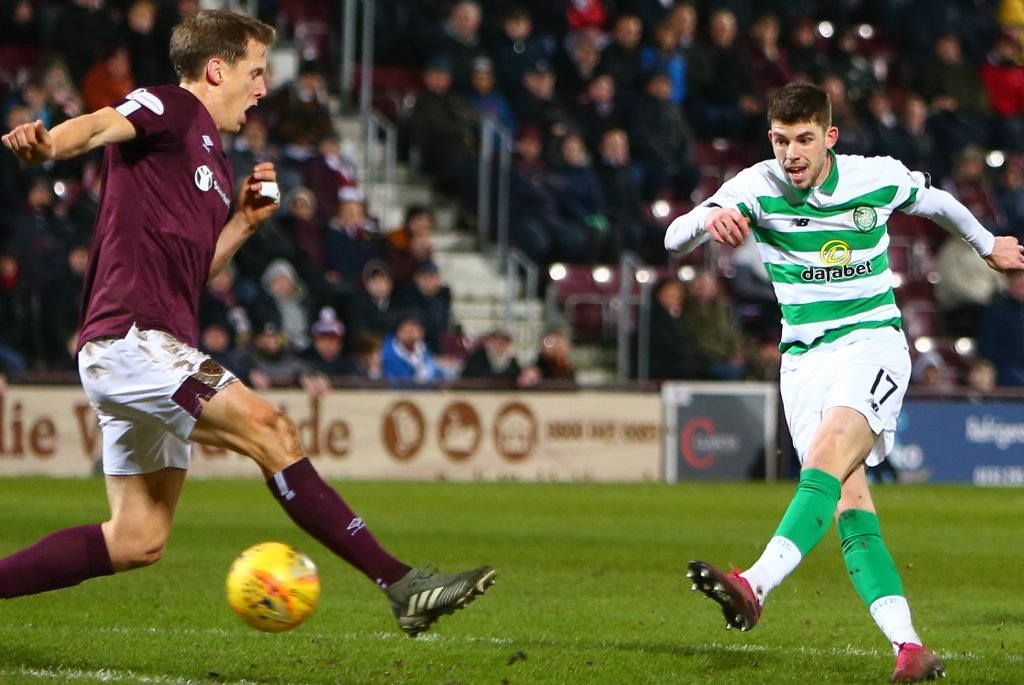 EIGHTEEN AND COUNTING…Ryan Christie fires in the opener at Tynecastle.

“I know going into any game that I’m going to get one or two chances, and it then falls to me to take them.

“Luckily enough, right now they seem to be going in.

“I did set a target, but I’m not telling you! I keep getting asked that, but if I get a couple more before the break I’ll be happy.”

The champions passed up a host of chances as they eased five points clear at the Premiership pinnacle and Neil Lennon made that observation known to the team.

Christie added: “Yeah, that was the gaffer’s only criticism, that we really could have put the game to bed in the second-half.

“He’s happy, though, that we’re creating chances, even though a few more of the boys could have got on the scoresheet.

“Most importantly, we kept the door shut at the other end and to come to a tough venue like Tynecastle and keep a clean sheet, we’re very happy.

”We know the games before the winter break are huge and the manager has drilled it into us that we need to have that winning mentality.

“We were happy to get the win at a tough venue, but now we have another tough game coming up this weekend.

“We’ve got three massive games from now to the break and we want three wins and nine points. That would put us in a good place.”