Celtic Quick News on News Now
You are at:Home»Latest News»CLOCK IS TICKING ON AJER: ‘KRIS HAS STILL GOT SOME ISSUES,’ ADMITS BOSS
By CQN Magazine on 15th July 2021 Latest News

The Hoops will take on FC Midtjylland in the first leg of their second round qualifier in Glasgow on Tuesday with the return in Denmark eight days later.

Ajer has yet to feature in the three pre-season games against Bristol City (0-0), Sheffield Wednesday (3-1) and Charlton (2-1) as the new boss has utilised over 30 players in the vital warm-up encounters.

The skyscraper Norwegian has trained with his team-mates in the pre-season base in Wales, but cannot possibly be match fit without a summer work-out in an actual game. 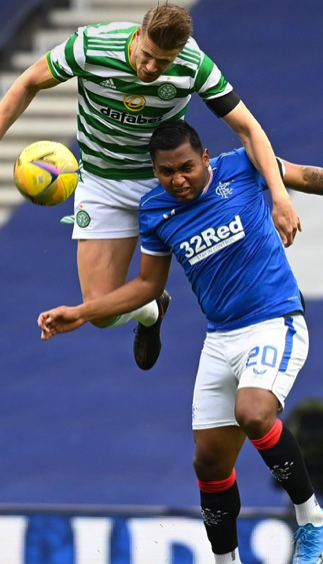 UP, UP AND AWAY? Kristoffer Ajer towers over Alfredo Morelos in an aerial duel.

The 23-year-old defender has been involved in intense transfer speculation in recent weeks and the Parkhead club are reported to have knocked back bids from newly-promoted Premier League sides Brentford and Norwich City with neither offer meeting their asking price of £15million.

Bayer Leverkusen, who paid £11.8million for Jeremie Frimpong in January, have also been linked with Ajer who has gone public with his desire to quit the club he joined in February 2016 from FK Start.

There is still the opportunity for the utility star to face Championship outfit Preston on Saturday in front of 2,000 fans in the east end of Glasgow.

If he does not get the opportunity to get rid of the rust from his limbs, it is highly unlikely he will face the Danes in the confrontation that provides a stumbling block on the way to the riches of the group stages of Europe’s elite competition.

Postecoglou, speaking to the Daily Record, admitted: “Kris has still got some issues. So, I’ll just have to wait and see how they go in the next few days.”

THE FINAL SAY…Kristoffer Ajer lashes in the quadruple treble-winning penalty-kick in the Scottish Cup Final against Hearts at Hampden on December 20 last year.

His lack of defensive awareness was exposed at Ibrox in January when he was red-carded for a clumsy challenge on Alfredo Morelos on the hour mark in a match the visitors had been dominating. With 10 men, they unluckily lost 1-0 when Callum McGregor deflected a right-wing corner-kick past Vasilis Barkas and the bid for the historic tenth successive title ended there and then.

So, the requirement for a dependable leader in central defence is abundantly clear and Postecoglou has been pressing for the £4million signing of Rubin Kazan’s Swedish stopper Carl Starfelt with today the deadline for transfers in the Champions League qualifiers.

It remains to be seen if Ajer has kicked his last ball for Celtic. One thing is certain, the clock is ticking on his opportunity to say farewell to the club with a bit of style.