ABERDEEN chairman Dave Cormack admits it will be “exciting” to be given the opportunity of playing Celtic in the Scottish Cup semi-final as a curtain-raiser for the new season, as CQN proposed yesterday.

The Dons were due to play the holders yesterday for the right to face Hibs or Hearts in the competition silverware grand finale at Hampden on May 7.

However, with football in lockdown due to the coronavirus pandemic, there is so much turmoil and uncertainty about the next step when the game eventually resumes.

All eyes appear to be focused on the fate of the suspended SPFL league season, but the Pittodrie chief has a clear vision of the SFA’s flagship tournament. He would like to see a quick-fire Hampden package that sees the trophy presented before the commencement of the 2020/21 campaign.

CQN emphasised the popularity of the now-defunct Drybrough Cup in the early seventies that served as the perfect scene-setter for the 1971/72 to 1974/75 seasons.

Cormack, speaking to the Daily Mail, said: “My understanding is that we will play both the semi and Final when we get back, which will be a really good thing to do.

“We don’t know how everything is going to shake-out yet, but that would be exciting. We have never been through this before, so we don’t know if it will take a number of months before we get there, but a curtain-raiser to next season would be excellent.

“It would provide a real positive focus on Scottish football.” 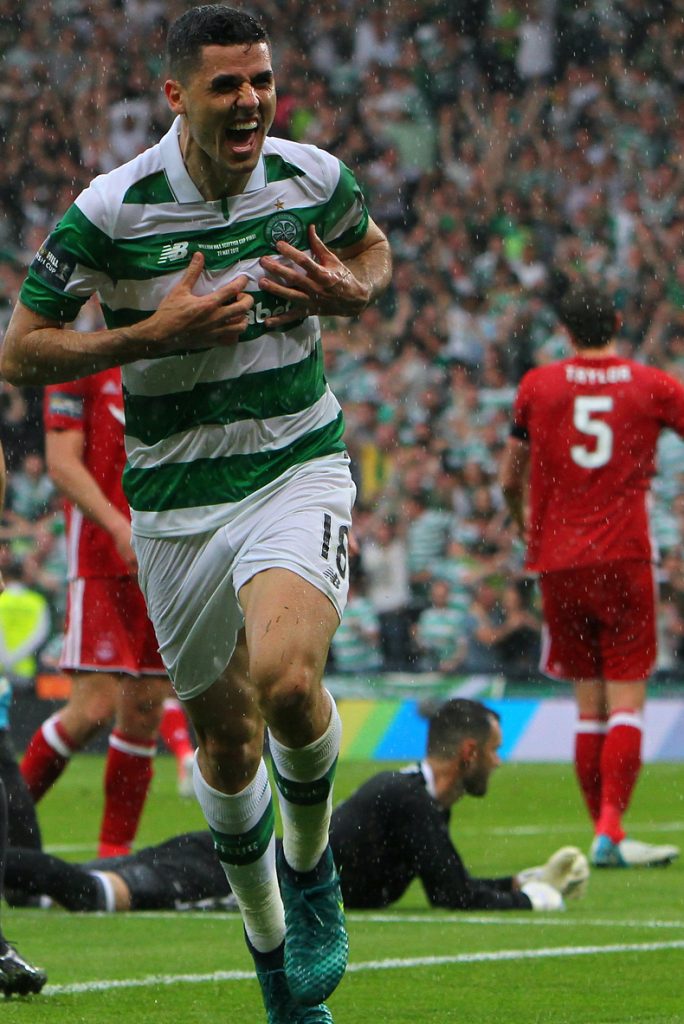 STOPPAGE-TIME SUPERSTAR…Tom Rogic races away in delight after scoring the winner against Aberdeen in the thrilling 2017 Scottish Cup Final.

American businessman Cormack, who voted along with Celtic and six other clubs for the SPFL proposal to call a halt to the season, added: “It’s very difficult to see us going from a shutdown and isolation to playing in front of 50,000 people the next day.

“It (a closed stadium) wouldn’t be ideal, but it shouldn’t be off the table.

“But we need to find a way to let people see the matches, especially if everyone has been isolating at home.

“There are mental health issues and people get a lot out of football. If they can’t see games in stadiums, then the next best thing is to see a competitive game on television.”

Neil Lennon’s were on course for their fourth successive Scottish Cup triumph when the killer disease brought football to a halt.

A stoppage-time goal from Tom Rogic was enough to beat Derek McInnes’ Dons 2-1 in 2017 – with Stuart Armstrong nullifying Jonny Hayes’ effort – and a year later Callum McGregor and Olivier Ntcham netted the strikes that downed Motherwell 2-0.

Odsonne Edouard took centre stage at Hampden last term when the Hoops came back from a goal down to beat Hearts 2-1 with the flamboyant Frenchman claiming a second-half double.