CELTIC survived the blood and thunder in Transylvania tonight during a rough and rugged confrontation with the Hoops edging closer to the Champions League play-off.

It ended in stalemate to set up an intriguing second leg of this third round qualifier at Parkhead on Tuesday and Neil Lennon and his players know they still have a lot to do to claim that precious place at the next stage.

The Romanians, as expected, were well organised, dangerous on the break and are no-one’s mugs. So, concentration at a packed arena in the east end of Glasgow next week is paramount against opponents who deserve respect.

In the fifth minute, there was the first flash of the sort of mesmerising menace Odsonne Edouard possesses when he latched onto a headed pass and worked the ball towards the box before unleashing a low 20-yarder that had keeper Arlauskis scrambling at his left-hand post to parry the ball and grab the rebound.

However, there was a scare for the Hoops only moments later when the defence failed to deal with a left-wing corner-kick and a Romanian got a free header at the far post, but missed the target with a wayward effort that flew over the bar.

OOPS…Boli Bolingoli gets a close-up view as Mario Rondon sweeps the ball through Scott Bain’s legs for Cluj’s goal.

Kristoffer Ajer had conceded the set-play with a timely intervention at the near post to clear the danger.

James Forrest was looking lively on the right and won two corner-kicks when desperate defenders got in the way of crosses into the box.

In the 18th minute, new Bhoy Hatem Abd Elhamed rose to a right-wing corner-kick, but his elevation was out and his powerful header cleared the crossbar.

Ajer went on an electrifying galloping thrust in the 22nd minute before rolling a pass in front of Boli Bolingoli on the left, but his pass to Lewis Morgan was just too heavy and the move collapsed.

Defender Borieano was the first to go into the Serbian referee’s book after a wild kick that caught Edouard on the face. Thankfully, the French ace was able to resume.

Unusually, Ryan Christie’s effort from the resultant free-kick was wasteful as he failed to clear the first defender.

Celtic fluffed another set-play on the left wing in the 28th minute and paid a heavy price as Cluj raced to the other end of the pitch and opened the scoring through Mario Rondon with the visitors’ defence shredded. 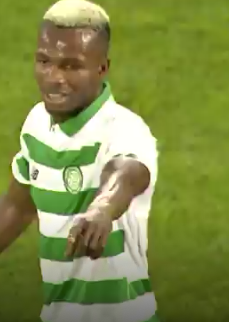 MAKING A POINT…Bolingoli had a torrid time in Transylvania.

Bolingoli didn’t appear to be aware of the Venezualan striker running in behind him and his opponent eased onto a neat angled through pass, drew Scott Bain from his line and squeezed the ball through his leg for the breakthrough goal. It was breathtakingly simple and boss Lennon would have been absolutely furious at his dithering defenders.

The Hoops left-back was then booked for an incident only moments later and Aurelio joined him after a clear foul on Morgan.

Celtic continued to squander deadballs in good positions and Christie was again the unlikely offender when he skied a free-kick to the far post and out of play in the 35th minute.

Two minutes later, it was all-square and it was all down to the genius of big-game player Forrest who had looked a genuine threat right from the kick-off.

The Scotland international spread the ball wide to the rampaging Elhamed on the right and the defender switched it back inside to the attacker about 16 yards out.

Forrest produced a lovely shimmy, switched the ball from his right foot to left and then exploded a low drive beyond the sprawling keeper, the ball entering the net via the inside of the upright. 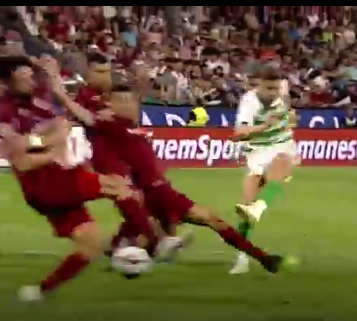 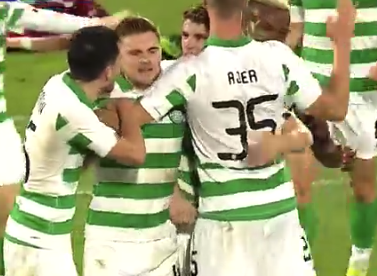 CHEERS…Forrest is congratulated by his delighted team-mates.

The goal sparked Celtic to life as they swept forward in numbers on two quickfire attacks, but the Romanians weathered the storm.

Morgan became the fourth player to be shown a yellow card after an innocuous challenge and an alert Scott Brown had to deal with the free-kick with a good clearing header at the back post.

The teams went in at the interval with honours even, but Lennon knew he had some work to do with his team’s defensive frailties with Bolingoli looking far too vulnerable and the £3million Belgian had appeared nervy even from the opening seconds when he inexplicably surrendered possession from the kick-off.

The Hoops were under threat with the deadball delivery of the Romanians, the ball normally coming in low and at pace, while, at the other end, the visitors were annoyingly failing to capitalise in an area where they are normally so strong and inventive.

Celtic started on the offensive after the turnaround and some tricky footwork and good control from Forrest set up Edouard on the edge of the box, but the Frenchman was too elaborate and a tackle took the ball away from his toes.

In the 51st minute yet more lamentable defending at a corner-kick almost cost Celtic dearly when a left-wing driven cross struck Brown at the far post and was scrambled clear by the diving Bain as it headed for the net. Lennon must have been sucking his fillings out at this point.

Bolingoli just couldn’t get to grips with the game and moves continued to break down at the defender while Christie squandered another free-kick and Morgan failed to get in a telling cross from a good position. Cluj were more than delighted to accept gifts from their generous visitors.

In the 64th minute, Susic also went into the book after a lunge on Brown. To be fair, the Romanian didn’t even bother to protest.

Elhamed looked composed on the right and a well-timed tackle cleared up a dangerous situation as two players broke on his flank with the Hoops defence again in a bit of disarray.

In the 67th minute, Lennon sent on Olivier Ntcham for the largely ineffectual Morgan as he attempted to get balance into his line-up. 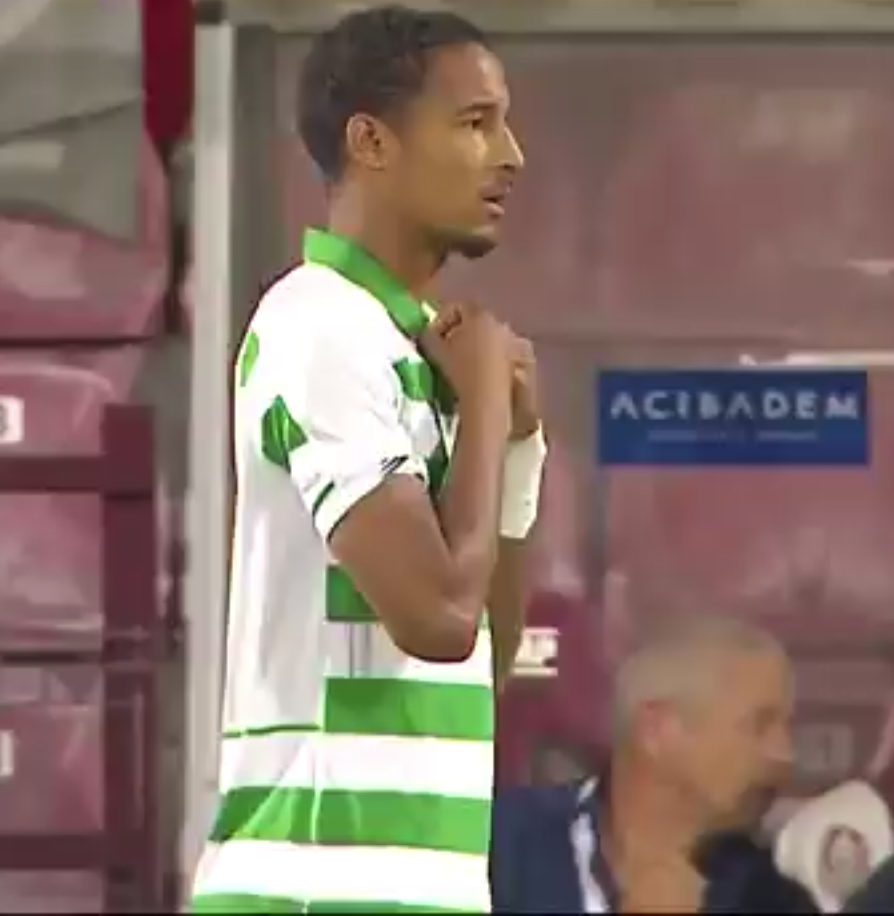 Seven minute afterwards, £7million Christopher Jullien joined the action as he took over from the limping Simunovic.

Twelve minutes from the end there was another heart-stopping moment when Ajer just managed to deflect a 12-yard drive wide of Bain’s right-hand post with the keeper scrambling to get a touch.

With four minutes remaining, Elhamed, looking exhausted after a tough shift, came off to be replaced by Nir Bitton, who picked up a booking for a non-challenge in stoppage time.

Celtic survived a deadball bombardment to hold on for a precious draw – with a smart save from Bain to help them along – but they will know they are still walking a Champions League tightrope.