THE spectre of an embarrassing Scottish Cup exit at Broadwood 14 years ago was left blowing in the wind as the holders made no mistake on this occasion.

There was never any chance of lightning striking twice for Neil Lennon who had been skipper of Gordon Strachan’s side that fateful and humiliating day in January 2006.

Much had been made of Celtic stepping once again onto the Cumbernauld banana skin this afternoon, but first-half strikes from Olivier Ntcham, celebrating his 24th birthday, and Scott Brown eased any anxiety among the Hoops followers. And late substitute Vakoun Issouf Bayo claimed a late third to make the scoreline more emphatic.

As expected, the howling, troublesome wind and the driving rain made certain finesse and slick football were a virtual impossibility, although, to be fair, the visitors did attempt to bring attractive play to proceedings, despite the elements.

FOILED…Patryk Klimala is robbed of a first Celtic goal as keeper David Mitchell blocks his effort.

The holders kicked into the gale in the first-half and £3.5million Polish striker Patryk Klimala, making his first start, was welcomed to the action with a wayward challenge from a frantic defender that saw him dumped in a heap. Referee Bobby Madden resisted the temptation to flash a yellow card at offender Scott Rumsby.

There was a brief scare for comeback keeper Scott Bain as a left-wing corner-kick got caught up in the swirling conditions, but he shifted his feet swiftly and grabbed the ball as it headed towards goal.

In the 15th minute, Mohamed Elyounoussi, making his first appearance of 2020, should have scored from six yards after a fabulous run and cross from Moritz Bauer into the box. However, the on-loan Southampton forward failed to get any oomph behind his effort and David Mtchell flopped on the ball to deny him.

However, a minute later, the deadlock was broken in fine style by crackshot Ntcham when he took a pass from Boli Bolingoli on the edge of the box on the left-hand side.

The French midfielder took a step inside, shifted the ball to his right and whipped a low shot zipping beyond the diving and despairing Mitchell to his left. 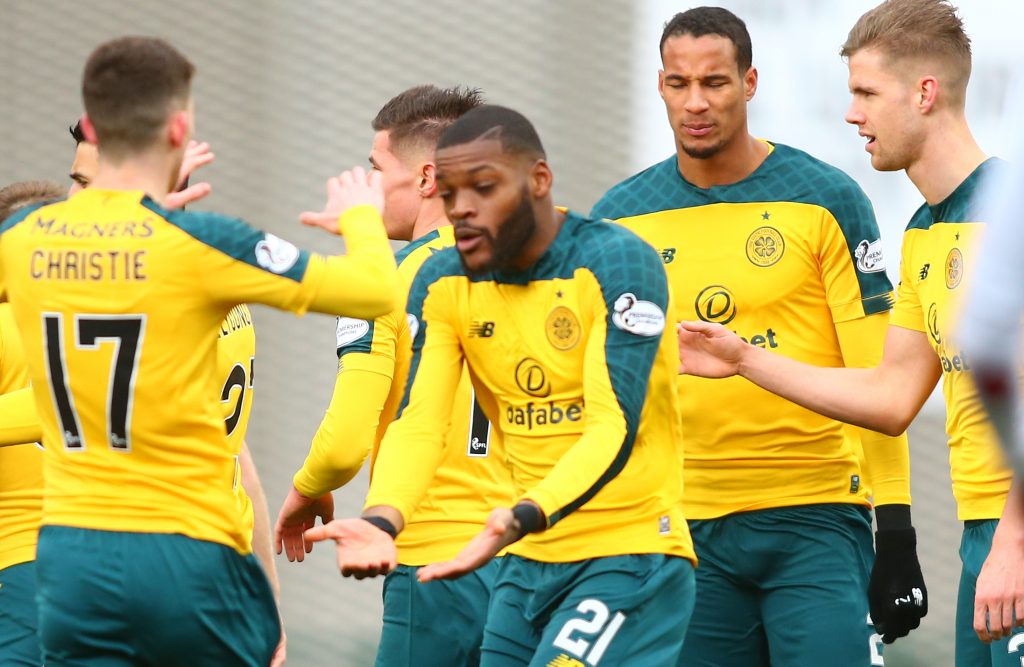 NUMBER ONE…Olivier Ntcham is congratulated by Ryan Christie with Christopher Jullien and Kristoffer Ajer about to join in.

The relief among players and supporters was almost palpable.

James Forrest looked in the mood on the right and was combining well with Bauer who also gave the impression he was eager to get involved.

Captain Brown, as ever, was a motivational factor in the middle of the park as he relentlessly urged the team-mates forward.

In the 32nd minute, Forrest set up Ryan Christie for an opening 20 yards out, but his low drive was straight at the grateful MItchell.

Moments later, Klimala had an effort diverted onto John Rankin’s hand, but the Hoops’ appeals for a penalty-kick were only half-hearted and match official Madden waved play on.

Klimala wasted an opportunity to double his side’s advantage after he had been sent clean through with a precise pass from Forrest.

However, he blew the chance when he fired his shot into the chest of the keeper and the opportunity was lost. It had been the ideal moment to score his first goal for the champions.

However, his blushes were spared by inspirational skipper Brown in the 40th minute when he swooped to get the second goal.

Christie flighted in a left-wing corner-kick that was nudged on by the new Bhoy and the 34-year-old midfielder flicked a right-foot attempt into the net at the near post.

Three minutes after the turnaround, Christie snapped in a low 25-yarder, but Mitchell was alert to the danger and got down well to hold on to the ball.

Chris McStay, son of Celtic legend Paul, let fly from outside the box as he tried to throw a lifeline to the home outift, but Bain took the effort with a fair degree of comfort.

Christopher Jullien was spending the encounter in an intriguing one-v-one duel with former Scotland international striker David Goodwillie – and the Frenchman was well ahead on points as the hour mark arrived. 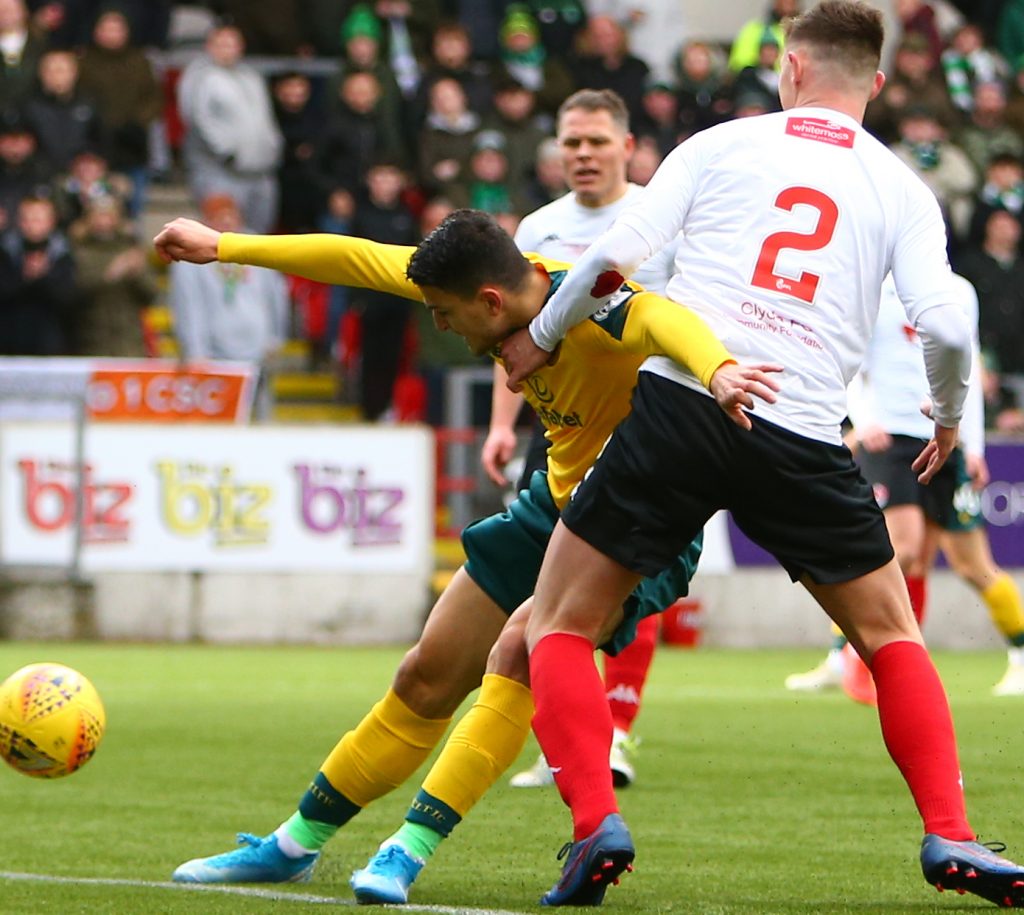 PUSH OFF…Mohamed Elyounoussi tries to make space in the box.

Elyounoussi was easing himself in after his lengthy absence, but he looked something like his old self when he went for a sparkling run down the left and along the bye-line before the chance was gone.

In the 71st minute, Lennon made his first change with the versatile Jonny Hayes coming onto to replace Forrest. Four minutes later, Klimala made way for Bayo.

The Ivorian frontman had two chances to score his second goal for the Hoops and squandered them both.

Maryan Shved was introduced to proceedings five minutes from the end when he replaced the tiring Elyounoussi. 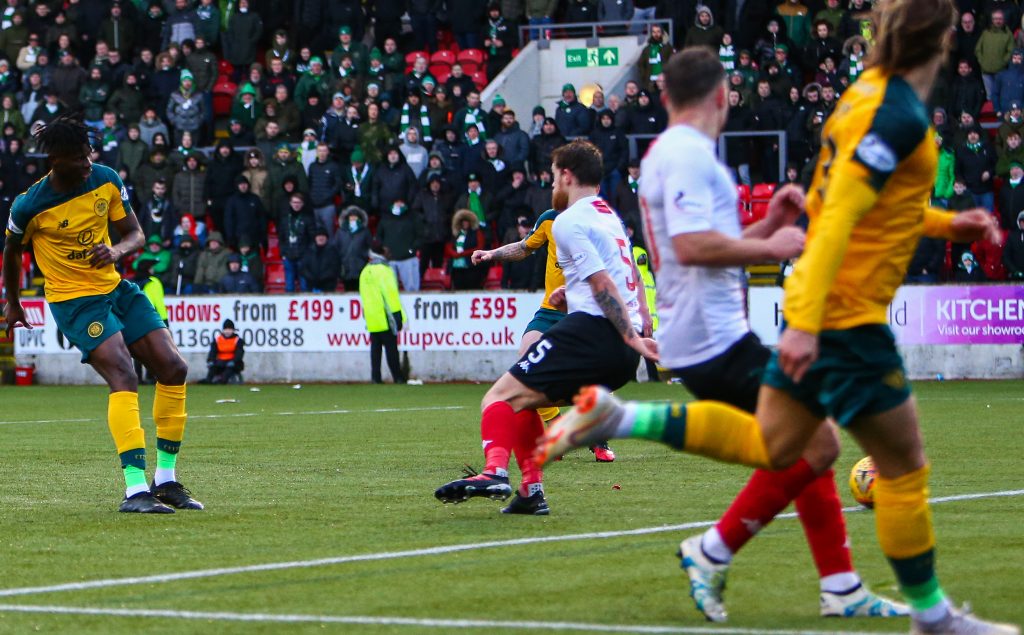 Just before the end, Brown teed up Christie for a shot at goal from 25 yards and the playmaker’s first-time left-foot shot clipped the crossbar with Mitchell helpless.

But the game ended on a happy note for Bayo when he turned in the third goal from eight yards after a neat cutback from Bauer.

It wasn’t pretty, but it was effective as Celtic edged closer to the phenomenal quadruple treble.

The champions can now look forward to a midweek Premiership confrontation against Hearts in the east end of Glasgow following four successive games on their travels.