Celtic Quick News on News Now
You are at:Home»Latest News»‘C’MON THE HOOPS,’ BAYO’S MESSAGE TO THE CELTIC FANS
By CQN Magazine on 7th February 2019 Latest News

CELTIC’S £2million new Bhoy Vakoun Issouf Bayo was disappointed not to make his debut in the 2-0 win over Hibs at Parkhead last night.

However, the Ivorian international still sent a message to the fans via Instagram. It read: “Unlucky this night, but I’m happy for the team + 3. C’mon the Hoops.”

The powerful frontman was waiting on the touchline with eight minutes to go and was poised to make his first appearance in front of his new supporters.

Unfortunately, Brendan Rodgers had to have a swift change of mind when Emilio Izaguirre was crocked by a wayward challenge from the Easter Road side’s Darnell Johnson that saw the Honduran stretchered off.

Jonny Hayes came on as a direct replacement and Bayo had to return to the substitutes’ bench.

However, the hitman is now ahead of schedule in the manager’s plans as he fights for match fitness. Bayo hasn’t played a competitive game since December 8 before the Slovakian football’s winter break.

He could now be involved in Rodgers’ plans for the visit of St Johnstone in the Scottish Cup on Sunday.

Meanwhile, the Irishman insisted the champions are “enjoying” their football as pressure mounts at the top of the Premiership. 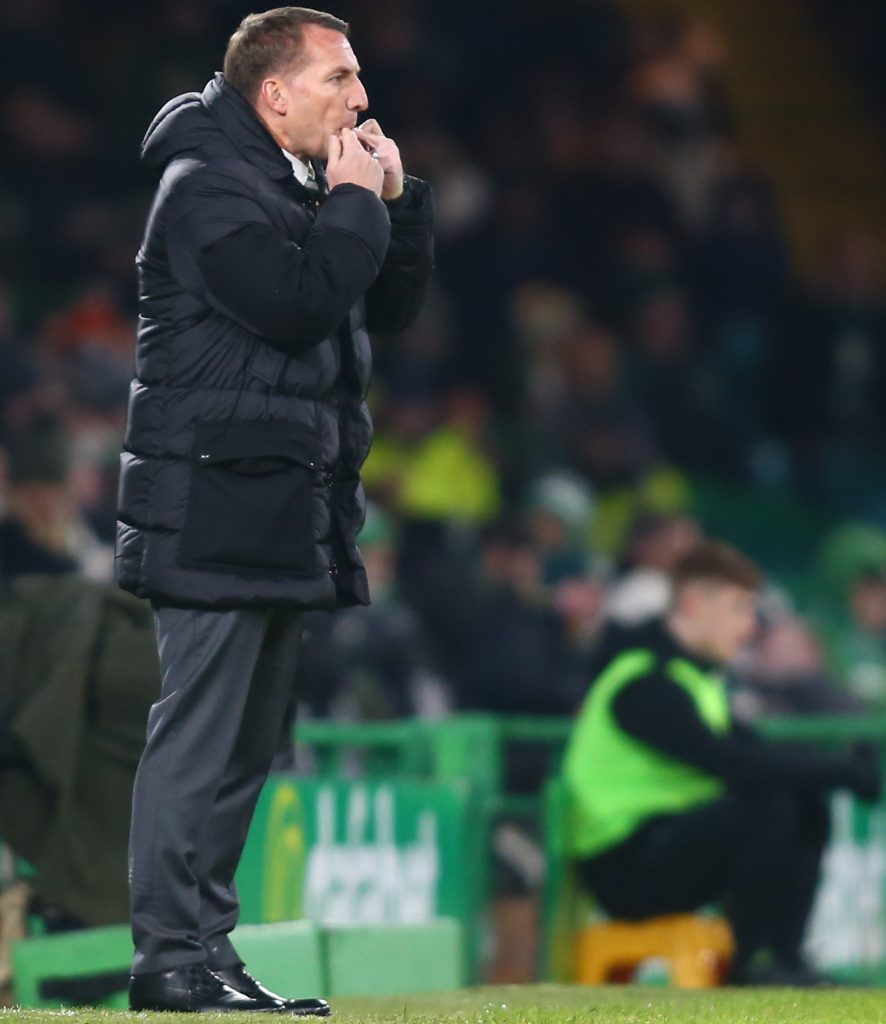 THE WHISTLER…Brendan Rodgers attracts the attention of one of his players in an unusual fashion. Pic: Geo.

The Hoops maintained their six-point advantage following their comfortable win over the managerless Edinburgh outfit with goals from Ryan Christie and Oliver Burke.

Rangers emerged from a stormy encounter at Pittodrie – where they had Alfredo Morelos red-carded for the FOURTH time this season = with a 4-2 victory over Aberdeen, who also had centre-back Scott McKenna dismissed after a bust-up with the controversial Colombian.

However, Rodgers is adamant his side – looking for their eighth successive crown – will not be distracted by any other teams breathing down their neck.

The Hoops boss said: “I have always tried to get my team to play without pressure and you can see that now because they’re playing well.

“People talk about pressure but we didn’t concede a goal, we played very well and while there are items we can look at, we are just enjoying our football.

“We can only focus on ourselves. There is a perception created around a challenge for the title and that it’s tight, but all you can do is focus on our own performance and not get too emotional about it and play good football.

“If we do that, then we know there is a good chance we’ll win.”