LEIGH GRIFFITHS is striking his way into the thoughts of Scotland international boss Steve Clarke ahead of the crucial Euro 2020 play-off semi-final against Israel at Hampden a fortnight on Thursday.

That’s the view of left-back Greg Taylor who hopes to line-up with his Parkhead pal when his former Kilmarnock manager announces his squad next week.

The defender has had a close-up view of Griffiths’ finishing skills as an opponent and a team-mate, so he knows what he is talking about.

And Taylor, who hopes to get the nod from Neil Lennon to play at Ibrox as a Hoops player for the first time on Sunday, as CQN reported earlier today, revealed everyone is BUZZING for the comeback star.

He has seen Griffiths form a lethal partnership with the talismanic Odsonne Edouard as the Hoops head for the history books for a fourth successive season with an astonishing quadruple treble on the horizon. 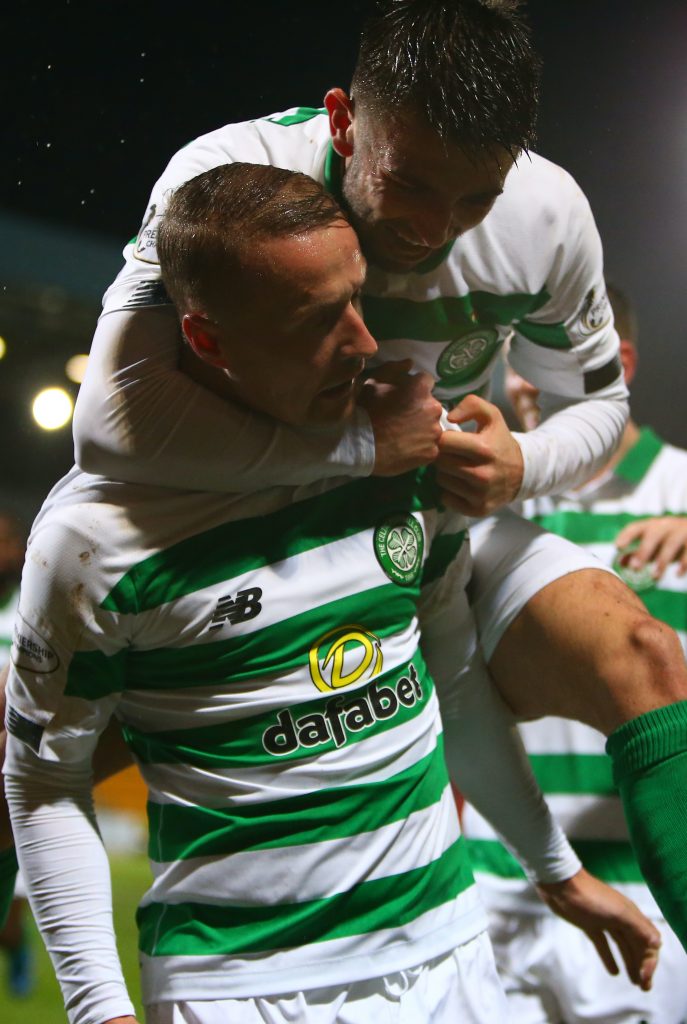 JOY BHOYS…Greg Taylor celebrates with Leigh Griffiths after the striker’s goal against St Johnstone in Perth in January.

Reflecting on 29-year-old hitman’s display in the 5-0 win over St Mirren at the weekend, Taylor told the Daily Record: “It was brilliant for Griff to get a hat-trick.

“He’s been great since he came back in the team and he links so well with Odsonne.

“They can both score and create and it’s brilliant to have them in the team.

“Griff gives us good options to play off and he has done really well.

“He is getting sharper all the time and he’s enjoying himself. We are all buzzing for him.

“The Scotland gaffer knows he can rely on me. I managed to grab a couple of assists in the last games.

“I am well aware I am behind Andy Robertson and probably Kieran Tierney when he’s back playing.

“But I will just need to keep doing what I am doing, and stay in the Celtic team.

“If that merits a Scotland call-up, I’ll be pleased.”

Griffiths and Taylor could be joined by Hoops colleagues Callum McGregor, James Forrest and Ryan Christie for the crunch encounter against the Israelis and could come in direct contact with fellow-champions Nir Bitton and Hatem Abd Elhamed.